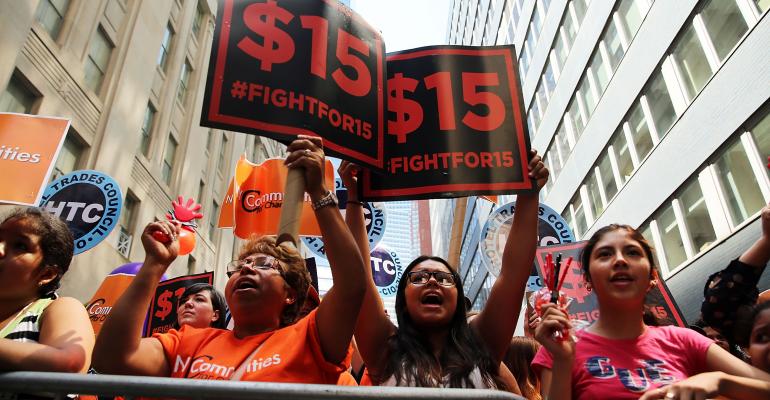 <p>Minimum wage might be out of the headlines, but don&#39;t expect it to stay there.</p>
Operations>Staffing

The minimum wage issue hasn’t drawn much attention so far during 2016's vitriol-filled presidential primary battles, but that could change come November. Passage of ballot initiatives in several states would require many restaurant owners to pay significantly higher wages than they already do. A new study says these mandates won’t hurt as much as you think, while a chain restaurant executive tells The Wall Street Journal that wage boosts will kill jobs in ways their proponents can’t seem to imagine.

Minimum-wage increases can be imposed three ways—administratively, via legislation or by ballot initiative—and plenty of proposals for each are in the works. The presidential election will draw plenty of voters to the polls to decide on some of them this November. Ballot initiatives in California (two different versions) and Maine are locked in; Washington state, Washington DC and Nevada may also get measures onto the 2016 ballot, depending on how political wrangling plays out this spring.

Oregon had two such ballot initiatives set for the fall election, but the state legislature passed a new minimum wage law in late February that could make those efforts redundant. Initiative backers haven’t said if they will end their efforts or not.

Whatever happens, restaurant operators will still face a patchwork of local, countywide or state mandates governing minimum wage. So does it matter to restaurant owners if new ones pass?

Not so much, say Cornell School of Hotel Administration professors Michael Lynn and Christopher Boone. They’re the authors of “Have Minimum Wage Increases Hurt the Restaurant Industry? The Evidence Says No!”

"We evaluated the effects of minimum wage increases for both regular and tipped restaurant employees, and we did this for both full-service and limited-service restaurants," says Lynn. "We recognize that wage increases usually require restaurants to increase their prices or trim their service, but we could not find any consistent effect on overall industry employment or on the number of restaurants operating. We tested the effects of changes in the regular minimum wage between 1993 and 2014, and changes in the tipped minimum wage from 2003 to 2014. The results were similar, and they confirmed previous findings that the restaurant industry seemed to be able to adjust to the relatively modest increases that we have seen in that time."

Of course, the next round of minimum wage increases is unlikely to be “modest.” Boone sees smooth sailing ahead, as long as wage boosts aren’t too much too soon.

"Most of the state wage increases are being phased in over time, so I'd expect the impact to be similar to what we've seen in the past: no big effects on employment, along with a clear increase in workers' total earnings,” he says. “But these results don't tell us what the impact of a sudden large increase would be."

Andy Puzder, c.e.o. of 3,300-unit CKE Restaurants, may have a better perspective on what the impact might be on real-world restaurant operators.

“When a store closes, the minimum wage for your lost job is zero,” Puzder writes in The Wall Street Journal. He cites his company’s experience on taking over Hardee’s 15 years ago. CKE closed 400 units because the numbers weren’t going to add up.

“Every retailer has locations that are profitable, but only marginally. Increased labor costs can push these stores over the line and into the loss column. When that happens, companies that want to stay competitive will close them. That’s one of the reasons that substantially increasing the minimum wage poses real risks for working-class Americans.”

He also notes that it’s hard to account for jobs that are never created in the first place because wages are too high. He said that Wal-Mart canceled plans to build a pair of stores in Washington DC in part because of minimum wage increases just put into place there plus the specter of a $15 an hour ballot initiative that will likely be voted on there in November.

“In the face of increasing competition from online retailers such as Amazon, traditional stores like Wal-Mart are minimizing expenses to stay competitive. Substantial minimum-wage increases make the belt much tighter. But businesses that fail to adjust to a changing environment might cease to exist or shrink to mere shadows. This is a reality that progressive groups and legislators may choose to ignore, but businesses do so at their peril. Ask Borders bookstores or Blockbuster video.

“If you want to give working-class Americans a path to the middle class, adopt policies that free up the businesses who want to hire them,” he concludes. “Otherwise, you’ve merely priced people out of a job.”

The current candidates hew to party lines on minimum wage increases. For the Democrats, Bernie Sanders wants a jump to $15 an hour. Hillary Clinton wants to raise the federal minimum wage to $12 per hour, but her inclusive position also supports state and local efforts demanding $15 an hour “in locations that can go higher.”

For Republicans, Ted Cruz is against any increase, as is Marco Rubio. Donald Trump is against an increase because it would make the U.S. less competitive in the world. Politico reports that “The business mogul said that people say they want to increase the minimum wage because it sounds good politically and even though it’s hard for him to say, he had to stand strong on not raising the minimum wage because ‘our country is losing businesses.’”

Expect the minimum wage issue to become prominent in the general election campaign.