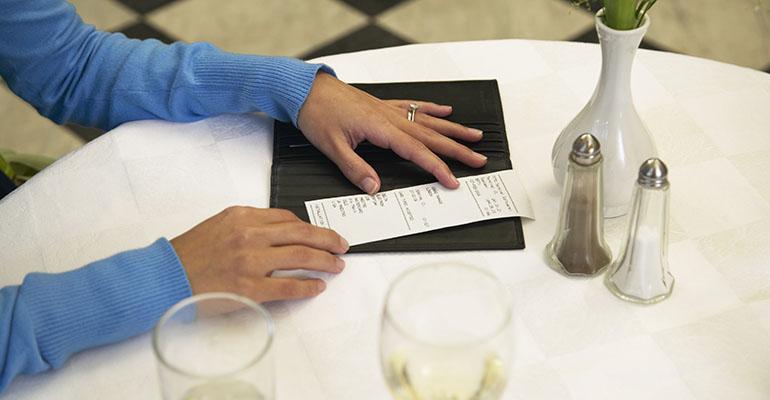 <p>Patrons skip out on checks for a variety of reasons. Deciding who&#39;s responsible can be touchy.</p>
Operations>Staffing

Can you dock servers' pay when customers dine and dash?

Steve Ells founded Chipotle Mexican Grill in 1993. He calculated that his original pop-up shop had to sell 100 burritos per day to turn a profit. Such an ambitious goal is daunting for a new business, yet not unusual for a restaurant. With such high startup costs, it's not uncommon for new restaurants to run a deficit.

This frightening reality conditions restaurateurs to be highly sensitive to expenses, especially unnecessary ones, like parties that leave without settling the bill. While crude, the notorious dine-and-dash is often a matter of opportunity. Patrons may decide that they've waited long enough to pay and feel justified in skipping out. And the manager, assuming the server was inattentive, might feel justified in making that server cover the tab. A variety of state regulations govern where, when and how employers may charge for an employee's mistake.

First of all, in the legal sense, mistakes include:

• having a customers leave without paying

Each of these situations is considered a mistake until proven otherwise in court. Payroll deductions for mistakes is determined by each state. The rules generally follow one of four paths:

1. It's allowed. The only stipulation here comes from the federal government: The deduction may not reduce the employee's income to less than minimum wage. So, if an employee earning minimum wage ruins an expensive skillet, you absolutely cannot charge him for it. By contrast, if your server accepts a fake $50 bill, you could deduct that amount from her paycheck, as long as her gross pay is still at least minimum wage (from tips or wages, depending on the state). It's important to note that, under no circumstance, can you collect the cost from their tips. The Fair Labor Standards Act is very strict about tips, deeming them the sole property of the tipped employee. Therefore, employers may not collect a server's tips to pay for a mistake. Florida, Georgia and Missouri are examples of states in this category.

2. It's allowed, as long as the employee has agreed to it in writing. This is the most common regulation governing payroll deductions for mistakes. The agreement could happen after the fact, such as if a server admits that he was negligent and is willing to eat the damages. More likely, however, the agreement would happen beforehand, in the employment contract. If you would like the option to charge employees for customers who skip the bill, be sure to state it in the contract. An attorney can help you draft a contract to make sure the wording is correct. Illinois, Michigan and Texas are among the states in this category.

3. It's allowed under certain circumstances. The circumstances vary state by state, but common requirements are that the incident was intentional or the result of extreme negligence. Whatever the conditions are in your state, it would be wise to have proof that they were met before deducting from payroll. For example, you may want to gather security footage, computer records or witness testimonies to validate the circumstances. This precaution would come in handy if the employee brings you to court. California, Indiana and Louisiana, among others, fall into this category.

4. It's never allowed. Some states have decreed payroll deductions for mistakes totally illegal. Montana, New Jersey and Oregon are examples of states in this category.

You can consult this table explaining each state's rules regarding wage deductions or read up on your own state's labor laws directly. Because many legal codes have intricacies that are difficult to simplify, it's a good idea to consult a lawyer if you have specific questions.

Legalities aside, charging employees for their mistakes is a sketchy management tactic at best. It implies a lack of trust in your workforce and makes employees feel unappreciated. Such a workplace culture does not encourage staff loyalty. Therefore, regardless of the law, it may behoove employers to avoid playing the blame game for losses. Instead, use them to gain insight (i.e., what can we do to help prevent this in the future?). In the case of dine-and-dash incidents, perhaps you could rearrange tables to make them further from the door, have a policy of securing credit cards up front, or hire a host to keep an eye on the exit.

Marlo Spieth writes and does outreach for Avvo, a website that offers online legal services. Note: The views and opinions expressed are the author's alone and do not represent Avvo. Also, the legal information herein is intended for general informational purposes only and is not the provision of legal services. Please acknowledge that such information consists of third party data and contributions, that there are certain inherent limitations to the accuracy or currency of such information, that legal and other information may be incomplete, may contain inaccuracies or may be based on opinion.