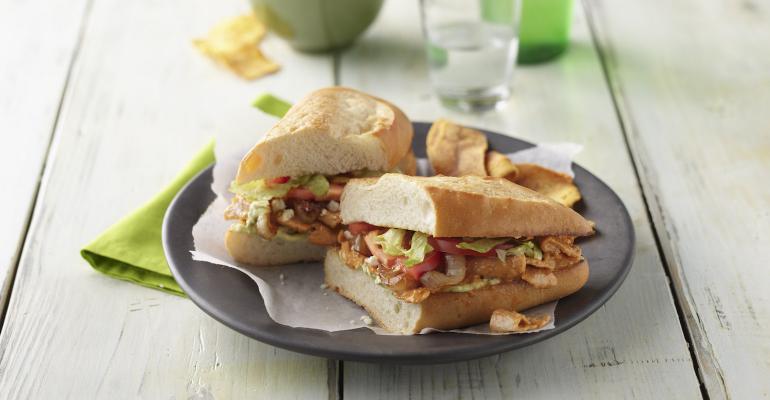 Some of the most exciting food news happens between sliced bread, on a bun or in a wrap. Signature turkey sandwiches are pleasing patrons everywhere from fast-casual and casual-dining restaurants to college and university dining halls and health care cafeterias.

Sandwiches are a menu staple. Of consumers who eat sandwiches, 76 percent say they purchase a sandwich from a restaurant or other foodservice location at least once a month, with 42 percent doing so at least once a week, says the 2018 Sandwich Consumer Trend Report by the market research firm Technomic.

Operators have reasons for appreciating sandwiches too. They can be made largely with ingredients already on hand in the kitchen. They require little skill and labor to execute. They are easily customized to follow eating trends. And they work for all dayparts and eating occasions.

The case for signature turkey sandwiches

There is a lot to be said for featuring turkey in sandwich creations. For starters, there’s the consumer perception of turkey as a protein that is healthful as well as flavorful. Its mild, pleasing taste appeals to consumers who seek a novel alternative to red meat without sacrificing flavor. And for those who follow high-protein diets like keto and paleo, it is tailor-made.

Also noteworthy is how well turkey accepts other flavorings. It is the perfect showcase for seasonings, rubs, sauces and garnishes. In fact, turkey can carry virtually any flavor profile that an operator can dream up and layer on. That’s a valuable attribute, given that 39 percent of consumers (50 percent of those ages 18-34) say they’d like restaurants to offer more sandwiches with new or unique flavors, Technomic says.

JENNIE-O® Turkey Ham is another plus for sandwich designers. This fully cooked, ready-to-use, all-around performer lends great taste to breakfast sandwiches, classic deli subs and many other applications that call for a lean, tasty protein.

To capture the imagination of consumers who are adventurous and health-conscious, try JENNIE-O® Shaved Turkey Steak and JENNIE-O® Turkey Ham in globally inspired sandwich ideas like these:

Clearly, turkey has shown itself to be a creative and flavorful addition to any menu, and operators will want to tap in to the excitement generated by this universally appealing protein. So don't miss out. Visit jennieofoodservice.com for more creative menu ideas for using new JENNIE-O® Shaved Turkey Steak and JENNIE-O® Turkey Ham.