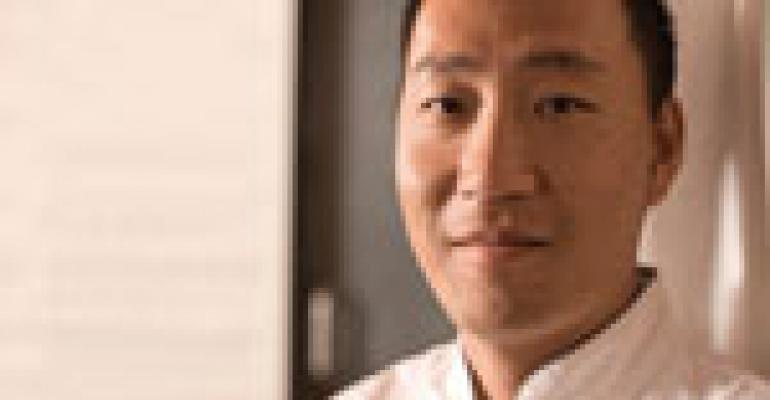 You don't see too many Korea-born dudes shredding the challenging slopes of the Colorado Rockies. But Akira Back did it with such style and finesse that the one-time professional snowboarder rode his way into the pages of Snowboarder magazine. But guts and glory don't always pay the rent, so Back began working in Aspen restaurant kitchens to supplement his income. As hard as this business is, it's far easier on the body than banging bones on the Rockies. Culinary school proved to be a smoother ride.

With a culinary degree in hand, Back landed a cooking job at Kenichi, a pan-Asian restaurant in Aspen. Back proved to be so talented that he was asked to help open units of the concept in Austin, TX, and Hawaii. His love of travel and culinary exploration eventually took him to Japan and Europe, where he worked with some big-time chefs, including Masaharu Morimoto and Brian Nagao.

When he returned to Aspen a more seasoned chef, Back landed a job as executive chef at Matsuhisa. There, under famed chef Nobu Matsuhisa, he learned to blend traditional Japanese cuisine with South American ingredients.

Now as executive chef at Yellowtail Sushi Restaurant & Bar at the Bellagio in Las Vegas, he's wowing customers with signature dishes such as big eye tuna pizza with shiso and Maine lobster carpaccio with sweet onion and cilantro.

Back's growing reputation got him a recent invite to battle Bobby Flay on the Food Network's Iron Chef. And though he was not victorious, television viewers witnessed a young, confident chef with a big future. And he didn't break a single bone doing it.