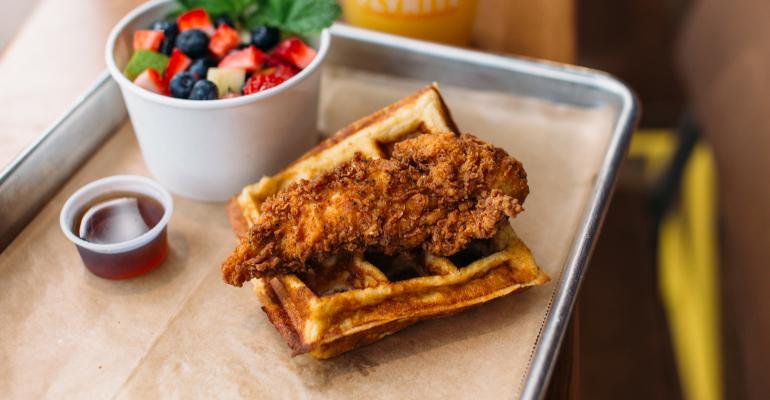 With established concepts expanding their footprints and newer players staking claim to a higher-quality poultry menu, the fast-casual chicken segment is chasing fast-casual burgers and pizza for market share.

From PDQ and Slim Chickens to Flyrite and The Chickery, premium chicken offerings reach for an audience that cottons to poultry.

“The greater growth in chicken consumption away from home is consistent with the introduction of chicken nuggets, chicken strips and grilled chicken sandwiches and their rising popularity in fast-food and other eating out places,” the USDA’s Economic Research Service noted in a January report. The restaurant industry has many examples of the breadth of fast-casual chicken options.

Nick Ouimet, who created Super Chix for Yum! Brands Inc. and later led an investor group to buy the brand, said the two-unit, Dallas-based company plans to add five locations in the U.S. this year, and open three units in Dubai.

“There are four types of food that can be big business: chicken, pizza, burgers and healthful stuff,” Ouimet said. “I think the burger thing is kind of played out, and restaurateurs are turning to chicken.”

Consumers eat more chicken that beef, he said, and “everybody is trying to get into the game.”

“We’re going to stay in the end-cap and in-line locations in heavy density areas, and we’ll leave the pad sites and let everybody else fight with Chick-fil-A,” he said.

The average check at fast-casual chicken restaurants tends to skew higher, about $10 with drinks, that at quick-service chicken brands, where the average hovers around $6 to $8.

The fast-casual brands also offer a wider selection of flavors and products to distinguish them from quick-service restaurants. For Super Chix, one of the barriers to entry is a selection of frozen custard flavors.

In addition, Super Chix plans to revise its menu at the end of February to push sandwich offerings, including a cheesy barbecue chicken sandwich, Cordon Bleu sandwich and a crispy avocado sandwich with gouda and Monterey Jack cheeses, Ouimet said.

“We’re also launching breakfast,” he said, including egg sandwiches, such as one with chorizo and gouda, which will be part of the test in late February.

Since the segment is fairly new, consumers are still finding ways to compare fast-casual chicken to other offerings, and brands are adapting Ouimet said.

Quoting one of his investors to describe where the fast-casual segment is today, Ouimet said: “There’s a lot of players and not a lot of athletes.” The segment’s players are as varied as the chicken they serve up.

Slim Chickens, based in Fayetteville, Ark., has expanded its “Life Changing” menu to 60 units in 12 states.

Starbird, created by industry veteran Aaron Noveshen and San Francisco-based The Culinary Edge, drew a second round of investment in the fall, nearly $5 million, to expand beyond its first location that opened last June in Sunnyvale, Calif. A second location is planned for Foster City, Calif., this year.

The Organic Coup in Pleasanton, Calif., is certified organic by the USDA. And David Chang of Momofuku Restaurant Group put a fine-dining patina on fried chicken in 2015, with the debut of Fuku in New York City.

Among the growing concepts are Canada-based The Chickery, which is moving into U.S. markets, as well as Austin, Texas-based Flyrite and more established brands such as Tampa, Fla.-based PDQ.

PDQ, which stands for People Dedicated to Quality, debuted in October 2011 and has grown to 55 restaurants in eight states. Jeffrey Kamis, chief marketing and public relations officer, said this year the brand will open in the new markets of Arizona, Illinois, Oklahoma and Utah.

PDQ makes all of its items in-house, from scratch, Reader said, and the brand has a test kitchen at its Tampa, Fla., headquarters.

"We look at the market broadly and really try to learn from the best in fine dining, fast casual and fast food," he said.

In 2011, he and Basham saw a need for “feel-good food and quality ingredients in the QSR segment, while also delivering unbeatable hospitality at affordable price points,” he said.

“Moving forward, we’re always testing and learning at PDQ, as we look to deliver the best guest experience possible,” Reader said. “That experience includes menu innovation and improved order functionality into our web and mobile experiences.”

PDQ continues to look at ways to improve speed of service and heighten product quality, he said. The development team is “very selective” about sourcing products, from produce to brioche buns.

“Our team personally visits and evaluates all vendors before we bring new ingredients in our restaurants,” Reader said. “We are proud to say that we’re a multi-store restaurant that uses fresh, never frozen, chicken.” Product quality is also a crucial factor at The Chickery, a five-unit, fast-casual chicken concept based in Toronto. In early February, the chain announced the development of 15 franchised units in Northern California. It also has one unit in Washington, D.C., as well as three restaurants in Toronto and one in Guelph, Ontario.

The Chickery debuted in 2012, in Toronto, and features both rotisserie and fried chicken, along with an assortment of salads, sandwiches and gourmet sides.

The Northern California locations will serve The Chickery’s newest menu item, Rotisserie Fried Chicken, which began as an after-hours staff favorite and secret menu item before recently making its way onto the official menu. The chicken is slow-roasted and then flash-fried.

David Bogorad, president of The Chickery, said the brand originally began as a way to fill a gap in Southern-style chicken offerings in Toronto.

“The founders spent some time traveling in Texas and came home to Toronto craving the flavors and dishes they'd had there,” Bogorad said. “There was no one doing this type of food in a chef-driven, fast-casual way at the time, so our founders decided to jump at the opportunity.”

The founders include Dan Rowe, CEO of The Chickery and co-founder of Fransmart Inc., who helped Five Guys grow.

Rowe found The Chickery interesting because it does both rotisserie and fried chicken, “while most others specialize in one or the other,” Bogorad said.

The company has found that the Washington, D.C., location was seeing high traffic at lunch, so the menu there has been tailored “to better serve a professional lunch crowd.”

So The Chickery recently added a faster-service express meal, consisting of a white-meat quarter rotisserie chicken, a side salad, sauce and fountain drink.

“It's lean and healthy, with great flavors, and it's ready almost as quickly as we can quarter the chicken,” Bogorad said. “We’re confident this healthy focus and speed of service will appeal to Millennial consumers.”

The chain is also tailoring flavors to local preferences.

“We've also noticed a larger demand for spice and heat in our D.C. store, so we're adding a new hot sauce to the mix, and I would expect to see a few spicier items coming out in the near future,” he said.

Like Super Chix, The Chickery is planning to open a new unit in Dubai later this year with an experienced franchise group.

“When you compare the chicken segment to other categories, like better burgers, fresh Mexican and overlay the rise of fast casual, it’s obvious we’re still near the start of the category’s growth curve,” Bogorad said. “Right now, there’s room for lots of players in the space, but ultimately only a few will become household names.” Flyrite Chicken in Austin, Texas, has opened its second fast-casual chicken restaurant, and founder Kevin Warden said he based the concept on convenience. But he though the experience could be “vibrant and memorable, whether you choose to drive through or come inside to sit and have a meal and a beer.”

Warden said Flyrite targets busy families who care how their food is sourced.

“At Flyrite, we spent extensive time sourcing our chicken that is raised without antibiotics and is vegetarian fed, as well as the best ingredients which are all free from artificial colors and preservatives,” he said.

Warden advised entrants into the fast-casual segment to “do something different.”

“Flyrite is carving out its own niche, attempting to clean up fast food with better chicken (raised without antibiotics and vegetarian fed) and better ingredients,” he said in an email. “We have also elevated the whole fast-food experience with a disrupting building design and interior. We also love that our customers can have a beer with their delicious chicken while dining in or to-go.”

Ouimet of Super Chix said fast-casual chicken, by his definition, is about the quality of the menu items, which makes smaller operations more nimble in catering to premium tastes.

“My general position is that it's difficult to win on quality with a drive-thru or in a primarily franchised model,” he said.