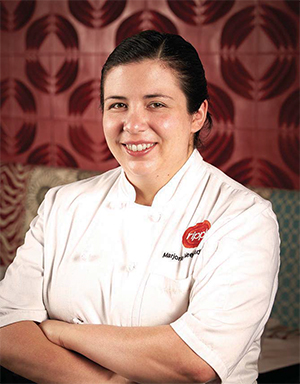 A lot of chefs attribute their love of cooking to their mothers and/or fathers, and the same can be said for Marjorie Meek-Bradley. But hers is a slightly different story because she grew up working in a soup kitchen owned by her parents. There were no family recipes to be learned, but it taught her how to cook using every donated scrap to feed large numbers of the unfortunate. Fortunately, her finesse as a chef came from the likes of Thomas Keller at Per Se and Bouchon (where she was the first woman to work the line). She also toiled as a sous chef for José Andrés at his acclaimed Mediterranean restaurant, Zaytinya. Thanks can also go to Top Chef finalist Mike Isabella and James Beard Award winner Marcus Samuelsson, who both opened their kitchens to her. All that experience led to the opening a few years back of her first restaurant, Ripple, in Washington DC. Last year, she followed that up with another restaurant, Roofers Union. Ripple, in the Cleveland Park neighborhood, offers polished, upscale farm-to-table dining, while Roofers Union, in the Adams Morgan neighborhood, is a casual American-style beer garden. It’s an impressive achievement for a woman who is only 30. The Washington Post, lamenting the demise of the much-beloved Palena restaurant in Cleveland Park, wrote: “Ripple, almost by itself, keeps the neighborhood relevant and well fed.” The Post also applauded the opening of Roofers Union: “The participation of Majorie Meek-Bradley, the talented chef at the arty Ripple in Cleveland Park, is a major reason to cheer this news (of Roofers, opening).” It seems Meek-Bradley not only brought life to the hungry in her earlier life, but she also brings life to any neighborhood where she cooks.