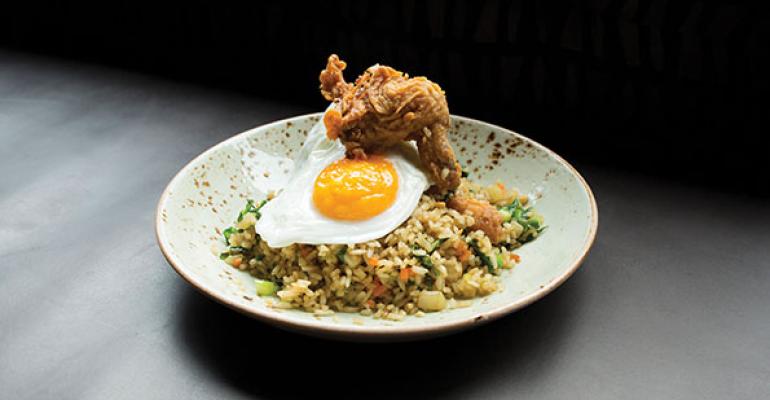 Since opening a few years ago, The Cecil in New York’s Harlem neighborhood has been a darling of the media and those intrigued by its groundbreaking Afro-Asian-American menu. The restaurant is the brainchild of chef/owner Alexander Smalls, who enlisted the help of Joseph “JJ” Johnson to launch what would become a 2014 Esquire Best New Restaurant. Smalls was the guiding force behind the menu, but he’s handed the keys to the convertible to Johnson, who recently launched a new menu to represent the flavor profiles of the world’s most influential Afro ports. It’s his first menu as executive chef, an honor perhaps bestowed for his James Beard Award nomination last year while serving as the chef de cuisine of The Cecil and adjoining jazz club, Minton’s. As executive chef, Johnson has gathered his notes from recent travels to Ghana, Jerusalem and the Caribbean to bring new excitement to the menu with dishes such as Moqueca, a Brazilian fish stew; Braised Goat Dumplings with piri piri sauce; Tamarind-Glazed Oxtails with brown rice grits, and a Senegalese street dish known as Hands Only, featuring rabbit sausage, beans and rice. Few places in the country serve such an exotic menu, but Johnson has the chops to transport delighted diners to faraway places.