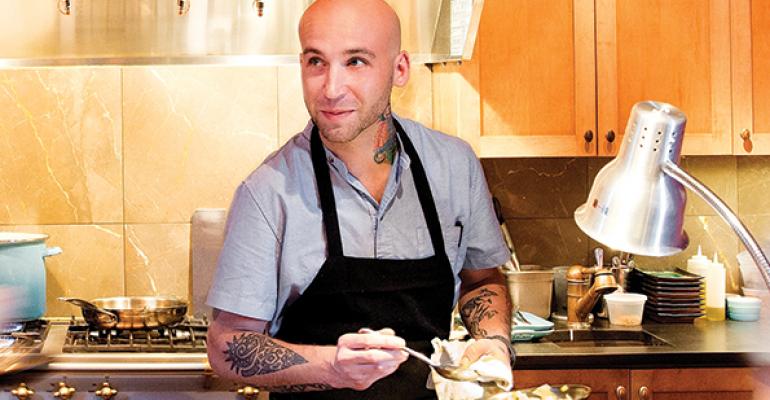 Chef Vinson Petrillo first caught our eye when he recently won a cooking battle that pitted him against 10 bright chefs at a regional S. Pellegrino Young Chef 2015 competition. He scored this victory just three days after his wife gave birth and under the glaring eye of some bad-ass top chef judges, including Wylie Dufresne, Paul Qui and Amanda Freitag. Despite the pressure, he buried his competitors and earned a trip to Milan to compete for the S. Pellegrino title of Young Chef 2015. The winner of that competition remains to be seen, but to understand just how talented Petrillo is, visit Zero Café + Bar in Charleston, SC, where he is the executive chef. The restaurant is located inside the Zero George Street Boutique Hotel, which Conde Nast Traveler named a “Top 5 Foodie Hotel in the World.” That’s even more pressure on Petrillo, but he’s clearly no cream puff. He demonstrated that after winning the Food Network’s Chopped and Chopped Champions. He does it all on the strength of his contemporary American cooking, which has the finesse of someone much older. Regardless of whether he wins the Milan title, Petrillo has proven to be a powerful force in the kitchen.