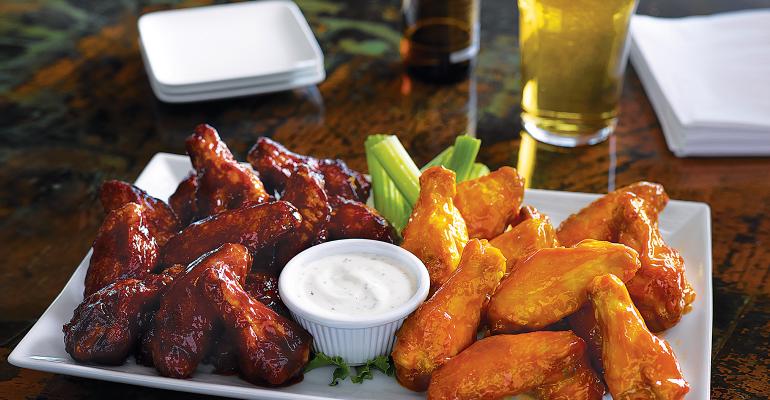 Americans can’t seem to get enough chicken wings, and creative restaurateurs are finding the enticement of interesting beverage pairings can turn that love affair into bottom-line gold.

“The richness of wings makes them a perfect pairing for a hoppy IPA, which is growing in popularity among beer drinkers, especially younger millennial beer drinkers,” offers Amy Myrdal Miller, president of Farmer’s Daughter Consulting, a culinary and nutrition communications firm.

Erin Ward, beverage director of Virgil's Real Barbecue, with locations in New York, Las Vegas and the Bahamas, agrees wings and beer is a match made in culinary heaven.

“People love wings and beer; it’s America's favorite game time nosh,” she says. “These days there are many different approaches to how wings are prepared, whether it’s the seasoning, cooking process or the sauce, which really make the beer pairings endless.”

“Ever since 1964, when the first wings were served with Frank’s RedHot® as the secret ingredient in Buffalo, New York, wings have been enjoyed with cold beer,” says Trip Kadey, director of culinary at The French's Food Company. “Today the consumer is getting more adventurous with beers and trying everything from dark brown porters, pumpkin, honey and fruit beers to IPAs, blonde ales, Pilsners and German Oktoberfest varieties. With this broader range of flavored beers comes a broader range of flavored wings to complement them.”

Eight out of 10 U.S. adults eat chicken wings, according to the National Chicken Council, and the amount consumed on Super Bowl Sunday is off the charts. In 2017 some 1.33 billion chicken wings were consumed, up 2 percent from the prior year and 6.5 percent from 2015.

“Wings have come a long way from being considered the scraps,” says Ward. “They've come front and center and, in fact, sometimes have become the star of the show with restaurants like Wingtime, Atomic Wings, Turntable Chicken Jazz, and Buffalo Wild Wings featuring them as the main meat.”

Eddie Johnson, co-owner of Atlanta-based Publik Draft House, says chicken wings are not only the perfect taste sensation for enjoying sporting events, but also great partners for a host of beverages.

“First and foremost wings appeal to everybody,” he says. “When you look at sporting events, people will always eat wings while also enjoying a beer. You can also complement the flavors with interesting culinary cocktails and craft beers, which tend to be a bit more pricey and add to the bottom line.”

Andrew Freeman, owner and president of Andrew Freeman & Co., San Francisco-based restaurant and hospitality consultants, says the popularity of chicken wings makes them a natural for a pairing program.

“Focus on the popularity of both items — great tasting wings, perhaps with different ethnic preparations — paired with the most popular national and regional beers.”

Freeman says there’s also plenty of opportunity for nonalcoholic pairings. “I believe you can have great fun with nonalcoholic beer substitutes, ciders and even cool tea pairings. The deep flavor of the wings will hold up well with all sorts of beverage pairings.”

“For the more adventurous operators, I’d recommend looking at tea as the base for nonalcoholic pairings. The tannins in the black teas can provide the bitter note to help offset the richness of the wing,” she says, while cautioning, “Stay away from overly sweet, cloying beverages. Aromatics like ginger and herbs like mint are another pairing that would work well with wings that have an Asian rub or sauce.”

Chicken wings appeal to a broader demographic than fried chicken and have paved the way for successful restaurant chains like QSR’s Wingstop and casual-dining’s Buffalo Wild Wings.

Chicken wings’ popularity extends beyond wing concepts, though, making them ubiquitous on menus of all kinds.

Freeman agrees that Asian flavors are hot right now and maintains that pairings and shareable dishes are also on-trend. “I am seeing Filipino flavors for sure,” he says. “We love intensely spiced dishes, and adventurous diners love to explore ethnic flavors and spices. The sharable concept is still going strong — so are pairings. Wings satisfy all of these trends.

Wings are popular at Virgil’s Real Barbecue, especially with beer. “At Virgil’s we go ‘big’ with our wings by serving the whole wing, marinated for 24 hours, then seasoned with dry rub and smoked for about three hours. Finally, when ordered, they are crisped up on the grill and hit with a little hot sauce to finish,” she says.

“As for the beer pairing with our Virgil’s Wings, you can go in a few different directions --- something light and crisp like our Virgil’s Ale brewed by Magic Hat or something a little more nutty with fruit-forward tones.”

For operators considering a wing/beverage program Maeve Webster, president of Menu Matters and trends analyst, advises it’s all about variety.

“Just consider a breadth of options across light, moderate and more robust flavors both in beer and wings. Another consideration is portion sizing — potentially in both the beer and the wings. Offering smaller portions of beer, either solo or in a flight, creates interesting options,” she says.

“Then there's the wing portion sizes, which should range from small plate to large shareable options that could then be paired with pitchers or buckets,” she adds.

“Finally, I'd suggest considering pairings not only with regard to the wing flavors but also the dips and other accompaniments that impact the flavor profile,” she says. “Dips and sauces afford operators an even broader array of customization options for patrons.”

Looking for wing and beer pairing ideas with trending wing recipes? Try this resource from Frank’s RedHot® King of Wings.