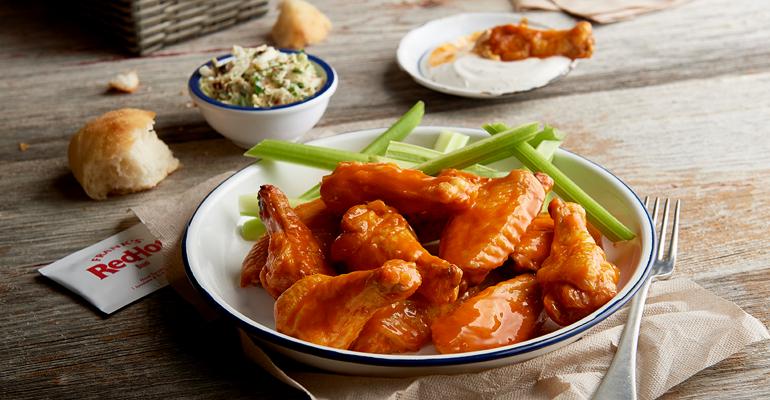 Spreading their wings around the table

Consumers want shareable snacks at all hours, and wings fit the bill.

It’s not just breakfast, lunch and dinner anymore. Snacking has become such an important trend that operators are devising all-day menus, showcasing appetizers as standalone orders and adding new categories such as shareables and munchies. And one readily customizable food item that has emerged as the quintessential, around-the-clock snack food is the chicken wing.

All-Day appetite
“I find people eating at all hours,” says owner Derek Fisher, owner of Wing-itz, with locations in Portsmouth, N.H. and Dover, N.H. “They want snacks and lighter food because they don’t want to have a four-course meal in the middle of the day, and they want something to get by until dinner.”

Young consumers
According to research firm Mintel, 94 percent of Americans snack daily. While many of these snacks tend to be packaged foods such as protein bars, consumers are also visiting their favorite restaurants when they experience a snack attack. There are 12 billion snack visits made to restaurants and other foodservice outlets annually, says the NPD Group, and snacks eaten as main meals now represent 24 percent of all snack food consumed — up from 21 percent five years ago.

Not surprisingly, the trend is being fueled by millennials and Generation Z, says NPD. “The snacking/appetizers trend is driven by the younger generation of diners who want to try different flavors, share plates with friends and customize their experiences,” says Bob Gallagher, senior vice president of culinary and purchasing for Romacorp, the Orlando, Fla.-based parent company of Tony Roma’s restaurants. “With so many dining choices available, there is a desire to get the most out of a meal, and that means getting to try multiple dishes and flavors.”

To respond to the demand for customization and for shareables, Tony Roma’s introduced a Bones & Bites small plates menu. “We want these dishes to be snacks that complement our core menu and allow us to show off some culinary creativity,” Gallagher says.

Among the most popular items are Tony’s Buffalo Ribs, which are pork ribs fried crispy with a Ritz® cracker breading and tossed in Buffalo sauce. The chain is also testing bacon-wrapped ribs and wood-grilled jalapeño poppers. Gallagher says 15 to 20 percent of guests currently order from the Bones & Bites menu in outlets where it’s available, and the chain is in the process of rolling out this new menu to 138 locations worldwide.

Snacks as strategy
In addition to attracting millennials and other diners, snack menus can also serve another purpose for an operator. “Offering shareables gives us a broader menu strategy,” says Bob Barry, president and CEO of Columbia, Md.-based The Greene Turtle. “It helps us in introducing new items.”

In addition, shareables can be part of limited-time offers that promote current menu items. In November, The Greene Turtle played on the Season of Sharing theme by promoting its shareable items, including 100 percent all-natural wings. The wings were available bone-in or boneless, served with celery and either bleu cheese or ranch dressing, and with a choice of sauces. Those include Blazing Hot, Kinda Hot, Bangin’ BBQ, Kinda Crabby, Maple Jalapeño Bacon, Mild, Thai Chili and Cajun Ranch.

Barry adds that shareables also encourage customers to continue to order food while they’re watching a game on TV. “People are coming in and ordering several items and drinks,” he says. “They’re sitting and watching the game, and they're grazing. And half an hour later they order more shareables.”

Multiple dayparts
Even breakfast lends itself to wings and snacking. All-day breakfast has become a significant trend, and breakfast foods such as chicken and waffles have influenced other menu items. At Nate’s Wings and Waffles in Seattle, Chicken Waffle Sliders are sandwiches that feature regular or spicy chicken strips, maple aioli and organic mixed greens. Nate’s also offers Happy Hour Wings — 1 pound of wings with a choice of Classic Buffalo, Chipotle BBQ or Garlic Ginger sauce.

Scott Randolph, chef and co-founder of Food & Drink Resources in Centennial, Colo., says restaurants are looking to move away from a three-daypart menu and are beginning to advertise a five-daypart menu. “These new items may include small plate or snacking plates, mid-day happy hour with alcohol or even desserts or a quick snack,” he says. “The other conversation we have been having with clients is snack packs with off-premise ordering and even encouraging a customer to pick up food and ‘stay for a snack or drink on us.’”

Help from suppliers
Many restaurateurs are turning to their suppliers for ideas on how to maximize the snacking trend. For example, Frank’s RedHot® Sauce offers operators tips on how to drive sales with wings as snacks:

Wings are a popular food at any time of day, during meals and between meals. Operators who menu consumer favorites at all hours can attract millennials and others who are looking for a delicious snack, appetizer or shareable whenever they crave it.