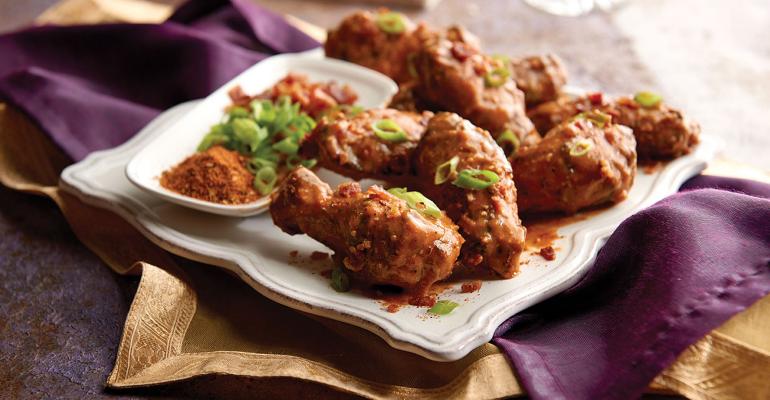 Operators demonstrate the sky’s the limit for creative wing sauces and rubs.

A flavor explosion has hit the chicken wing menu with full force. Thanks to creative chefs, operators and suppliers, the choice now is not just whether you want your Buffalo wings mild, medium or extra hot. You can choose from Sriracha or sweet ginger or Thai Herb or even PB&J wings --- and the list goes on.

Chicken wings have been menu favorites for more than 50 years, not only because they are so tasty, but also because they are a fun, shareable appetizer. These days they are even more so. Customers can mix flavors and wing styles and keep everyone at the table happy. They can also sample new tastes without committing to a whole order.

One successful illustration of an independent operator embracing the flavor explosion is Boneheads in West Warwick, Rhode Island. Danny Morel, one of the owners, says Boneheads features more than 100 choices on its menu. One of the best sellers is called Wrong Side of the Road, a honey Sriracha sauce. Boneheads also menus a cranberry habanero sauce, a strawberry teriyaki sauce, a selection called the Lunch Box, which is peanut butter and fluff sauce, and the Fireside Song, which is basically a s’mores wing.

If those aren’t varied enough, diners can try mac and cheese wings. Morel explains Boneheads also offers dry rubs like salt and vinegar or sour cream and onion. “There is nothing that we can’t put on our chicken,” he says.

Boneheads cooks the chicken first — wings are fried with no breading; boneless are breaded to retain the moisture — and then sauce or dry rub is added.

Not all operations must cater to customers with scores of flavors for their wings, however. The owners of Epic Wings N Things, a 19-unit chain in Southern California, are hoping their strategically pared back wing-centric concept will take flight. The chain was founded in 1983 by Mom and Pop Sacco, and over the years their five children have opened units in and around San Diego.

Five years ago the family joined together so they could franchise the business. Each family member is now a franchisee of the corporation. They are getting ready to offer franchises to non-family members and plan to have 30 more locations up and down the coast shortly.

The Epic Wings strategy for product development is to feature a new flavor as a limited-time offer in a few of the units. If it is received well and sales are good, it is taken on by the entire chain. Epic has added a sweet chili sauce to its menu and is experimenting with a garlic Parmesan.

Since the sauce is the thing that everyone seems to love, many chefs and operators are seizing the opportunity to add chicken wing sauces to other non-wing menu items. Epic Wings has Buffalo Pizza Sticks and Buffalo Chicken Fries. High school kids especially like the fries, Sacco says.

Vegetarians need not shy away from the chicken wing menu, either. Some operators are substituting charred cauliflower florets or mushroom caps for chicken. Even firm tofu can be used. These options, sauced with the same flavors, are popular not only with vegetarians but also with carnivores who want to add a few non-protein options to their menu.

Meanwhile, operators and experts embrace the “anything goes” philosophy currently permeating the wing business. “To me, one of the most exciting new things is the flavor expansion,” says Trip Kadey, Director of Culinary for The French’s Food Company. Kadey is responsible for menu and product development as well as market insights for the company, so he has his finger on the pulse of the flavor explosion.

“Years ago, people would menu a Buffalo wing with Frank’s RedHot® Sauce mixed with butter. They might have different levels of heat. Now many people are menuing beyond the Buffalo,” he observes.

To aid operators with their menu development program, Frank's provides a feature on its website called “The Flavor Tool,” offering a series of recipes designed to help operators add new flavor options. Kadey says the site also is adding vegetarian options to the recipe collection.

Not only are commercial operators seizing the opportunity to branch out with new wing flavors, he says, but also the growing variety of sauces has gone over big time in pop-up wing bars in colleges and universities and business and industry sites. Not only are new sauces like barbecue, honey and garlic or Asian popular, but boneless wings also have taken off as well.

Experts agree that nonstop growth in wing flavors and wing styles have demonstrated that the concept is flexible and open to all sorts of innovation. Some foodservice operations will stick with the traditional items, offering a few select flavors and a variety of heat. Meanwhile, trendier restaurants are catering to consumers with more adventurous tastes who seek new wing experiences. The thing that makes them all chicken wing-ish, however, is the sauce or the rub. It’s a bold new chicken-wing world of flavors out there.