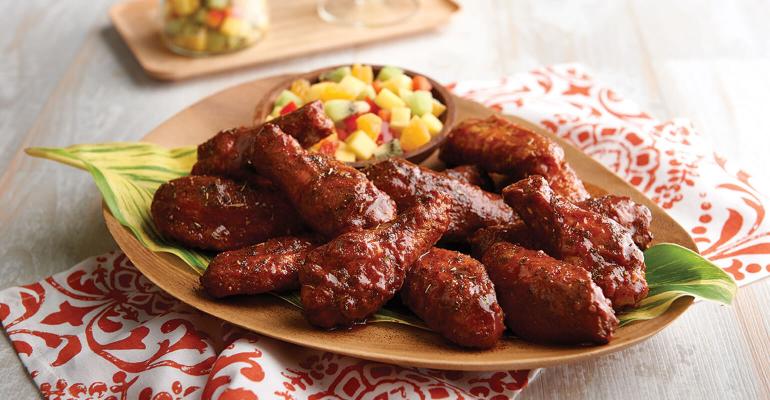 From hot to sweet, chicken wings are still in high demand and operators are going bold with flavors.

Other than pizza or possibly hamburgers, there’s hardly another menu staple that’s been so widely and consistently re-flavored as the chicken wing.

For decades Americans were content to eat them deep fried and tossed in tangy Buffalo sauce. Over that stretch, Buffalo wings, became — and remain — the top flavor by a wide margin.

Then the demand for more heat entered the picture, followed by flavors of barbecue and smoky honey and jerk seasoning. Today, wings have achieved levels of extreme heat, helping to catapult them from popular appetizer status to core-of-concept stardom. Formerly a castoff cut, chicken wings are as in demand as any poultry part, and now they’ve become a versatile bite with which chefs test bold flavors drawn from international influences and even liquor cabinets.

“Wings are excellent flavor carriers because they absorb whatever you put on them,” says Elliot Jablonsky research and development chef at 70-unit, Cincinnati-based Buffalo Wings & Rings Cincinnati. “Customers want bolder flavor and they’re comfortable getting that from wings.”

The numbers bear out Jablonsky's flavor claim. According to Chicago-based Datassential, the use of sriracha on wings rose 68 percent last year, and peanut use (most often in Thai-flavored renditions) climbed 48 percent. Dry rub applications — including a range of spices like jerk and Cajun seasoning to mere salt and pepper — are up 30 percent.

“We’re not eating subtle food; we’re eating big flavors,” Jablonsky says. “Over time people’s palates require more flavor, and they move beyond what used to interest them. Everywhere you look, flavors are big and loud.”

In some cases, they're even screaming. That's the case at Dallas-based Wingstop, where Atomic is the name of its maximum heat level, followed by habanero. Less searing but still flavorful options include lemon pepper and a sweet and tangy Hawaiian sauce. Industry leading Buffalo Wild Wings maintains a 21-sauce lineup altered occasionally with seasonal LTOs. The Minneapolis-based chain’s Blazin’ sauce utilizes the fiery and fearsome ghost pepper, though several heat levels lower,  a Thai curry sauce offers a bit of a buffer with flavors of coconut and less-potent chiles. Both make BWW’s bourbon honey mustard seem soothing by comparison.

Trip Kadey, director of culinary at The French’s Food Co., has helped lead the adaptation of Frank’s RedHot® sauce to this bolder flavor trend. In addition to some predictable offshoots of its RedHot® Buffalo Wings sauce, the company has extended its 11-sauce line to include Sweet Chili®,  Sriracha Chili Sauce, Stingin’ Honey Garlic™ and Rajili® Sweet Ginger Sauce.

And while Kady acknowledges bolder flavors are increasing wing consumption, he believes variations on “the carrier” is helping usher in new flavors.

“The boneless wing is playing a significant role in that growth,” he says. That’s due in part to Generations X and Y being raised on chicken tenders, and “it keeps people from having to navigate the bone, skin and fat if they don’t want to.”

“It can be something as simple as a naked chicken tender that’s grilled or pan seared and then sauce gets added,” he says. This past summer, when he did a pop-up wing bar at a large corporate campus, “boneless and skinless were very popular. You can still get great flavor when it’s cooked properly.”

Kady and Jablonsky both say wing eaters are increasingly fond of hotter sauces, yet the extreme versions containing habanero peppers or the palate-numbing ghost pepper are less popular than some might claim.

“Yeah, you’ll see the braggadocio young male who’s looking for that to impress his date, but heat is mostly middle of the road,” Kady says. “We tell our customers that having a variety of flavors in their sauces is the best idea. Focusing on the hot-hot-hot ones isn’t what everyone wants.

Jablonsky says Buffalo Wings & Rings’ customers build their own sauce combinations right down to the amount of heat preferred.

“You pick your wing type, your sauce flavor and your degree of heat,” he says. “We don’t design our sauces just to be spicy. We let the customer decide what their preferred level of spicy is.”

Sometimes wing flavors are top-down initiatives, such as this fall when Jablonsky was challenged to make an LTO rub and sauce combo using traditional holiday flavors. The result was a rub of cinnamon and chipotle, and a four-element sauce of cranberry, bourbon, barbecue and mild Buffalo.

“I liked the Buffalo mild to counteract the acidity in the cranberry,” he says. “The dish has a lot of ingredients going on, and you’d think it might be too complicated in the mouth, but it came out great.”

Though these pairings were the deliberate work of his team, Jablonsky says bold flavors make great pairings happen almost automatically.

“Pairings happen whether you seek them or not; they’re inescapable,” he says. “We’ve always accepted that wine goes well with cheese because acidity and fat work so well together. But now we see boldly flavored wings and (microbrewed) beer or a great cocktail everywhere. They’re all big flavors that people want.”