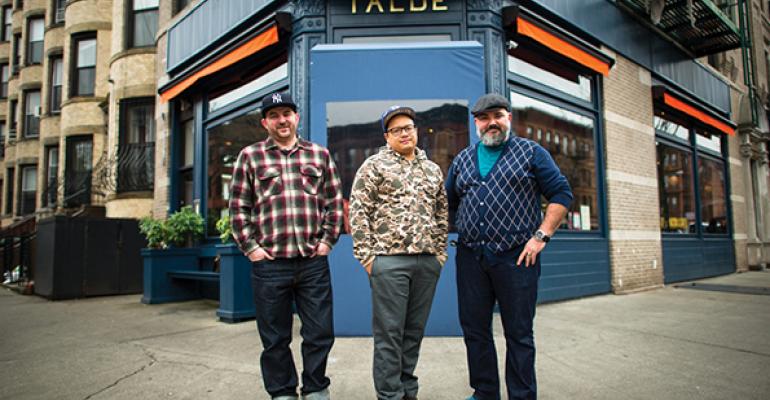 MULTIPLE CONCEPTS:
• Talde Brooklyn (the eponymous restaurant of chef Dale Talde, who showcases the vibrant flavors and cuisines of Asia while also incorporating his distinct experience as a second-generation Asian-American)
• Talde Jersey City (in addition to favorites from Talde Brooklyn, the menu features a variety of new dim sum and robata dishes).

WHY IT’S COOL:
Many remember Dale Talde from his three appearances on Bravo’s Top Chef series. His skill and creativity made him stand out among some very good chefs. And it’s no wonder.The guy has cooked for some giants, including Jean-Georges Vongerichten, Shawn McClain, Carrie Nahabedian and Masaharu Morimoto. What made him a force to be reckoned with was his time running Asian concepts for Stephen Starr, including the goliath Buddakan. Everything after that must seem so much more manageable. At Three Kings, he and his partners cranked out two very good Brooklyn restaurants—Talde and Pork Slope—and revitalized Thistle Hill Tavern, the partners’ previous restaurant. That was all in 2012. Late last year, they teamed up with three pals and opened an Italian restaurant and café called Carrino Provisions in Jersey City. By the time this appears, a Miami Beach outpost will have opened in the Thompson Hotel. This group has momentum and, maybe more importantly, a pint-sized powerhouse in the kitchen who creates irresistible food.