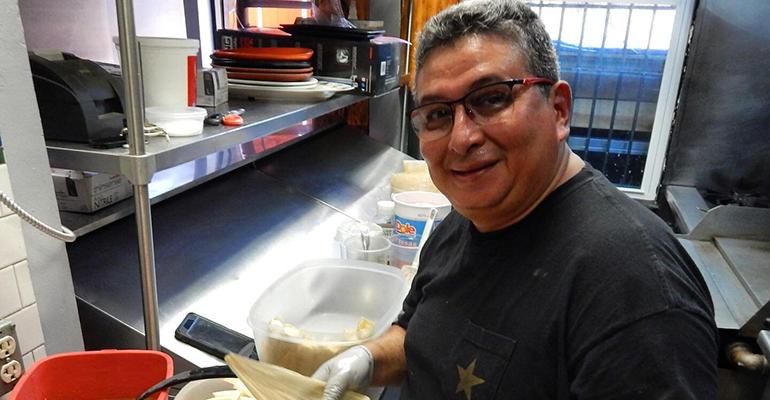 The Tamale Guy
Claudio Velez, who is known as “The Tamale Guy,” is reportedly in stable condition after being diagnosed with COVID-199 last month.
People

‘Tamale Guy’ Claudio Velez is in the hospital with COVID-19, but his restaurant reopened in Chicago anyway

Claudio Velez, who is known as “The Tamale Guy,” has been somewhat of a celebrity in Chicago for almost two decades, walking around neighborhoods and selling his homemade tamales out of a cart.

He was known for carting a red cooler from bar to bar in North Chicago neighborhoods, packed with tamales in plastic Ziploc bags. Velez reportedly immigrated to Chicago at age 28 from Mexico and has been selling his tamales ever since. He is currently 55-years old.

There was no schedule or set route and The Tamale Guy, as he was affectionately known, was a welcome surprise to late-night bar guests as he pulled up outside an establishment.

When the pandemic forced Velez to stop selling out of his cart after bars closed, he lost all his income and had to think of a new plan.

After a few failed attempts at selling door-to-door that led to cease-and-desist letters from city officials,  Velez decided to open up his own brick-and-mortar restaurant in early August. It was funded partially by a GoFundMe page set up by loyal patrons that raised $33,000.

The Ukrainian Village restaurant is called Tamale Guy Chicago and, while it takes walk-in orders, it is highly recommended that customers order ahead. The restaurant sold out within hours on its first day.

“I am very excited, especially with everyone who helped make this dream possible,” Velez said in Spanish in July according to Book Club Chicago. “This has always been my dream.”

In late August, however, Velez tested positive for coronavirus and was hospitalized in the ICU according to an announcement from business partner Pierre Vega on Instagram.

Hello friends, we are very sad to inform everyone that Claudio has tested positive for Covid-19. He had a sore throat earlier in the week and has not been at the restaurant. While waiting for his test results his health rapidly declined within a couple days. He was admitted to the ICU and put on a ventilator. His rapid test performed at the hospital confirmed a positive Covid result. We are closing the restaurant until further notice to make sure our team is taking the proper safety precautions. We have been truly overwhelmed by everyone’s support and kindness over the last few weeks. Please keep Claudio in your thoughts and wish him a speedy recovery.

The restaurant was immediately closed, and all workers were tested while a deep clean was conducted.

Good evening friends and supporters. We want to first thank you all for your well wishes and continued support. We wanted to share that our entire staff has tested negative for Covid. We will be reopening tomorrow, Wednesday at 11:00am for your tamale needs! We are very much stressing a one customer inside at a time rule in order to keep everyone as safe as possible. We have assigned extra cleaning tasks and any employee with an elevated temperature reading will be sent home. We sincerely want to thank everyone for keeping Claudio and the rest of our staff in your thoughts. We are looking forward to seeing all of your masked faces tomorrow!

Velez, however, remains hospitalized. No official word on his current condition, though Eater reported his condition has stabilized after being on a ventilator.

A second GoFundMe has been created to cover Velez’s medical care by one of the co-owners of Tamale Guy Chicago, Kristin Vega. In 10 days, the fundraiser has raised over $56,000.