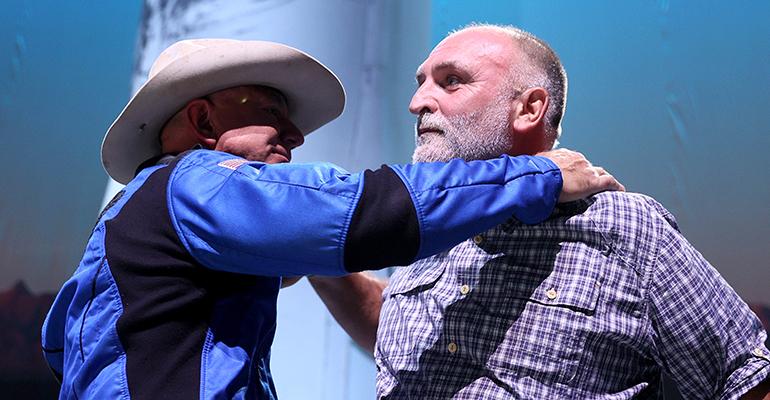 After his flight into suborbital space on Wednesday, Amazon founder Jeff Bezos announced he would be donating $100 million to José Andrés and his nonprofit World Central Kitchen. The donation is part of a new prize Bezos is calling the “Courage and Civility Award.” Political commentator Van Jones also received $100 million.

Awardees of this prize must donate the $100 million prize money to the charity of their choice.

Andrés immediately announced he would be giving his prize money to World Central Kitchen, the nonprofit he established to feed the needy in the wake of natural disasters, and which has been feeding essential healthcare workers, poll workers and those on the front lines of racial justice protests since the pandemic started

In a statement obtained by Eater, Andrés said, “I’m so honored. I’m really grateful for this award, and the incredible support from Jeff and the entire Bezos family. World Central Kitchen was born from the simple idea that food has the power to create a better world. A plate of food is a plate of hope … it’s the fastest way to rebuild lives and communities.

“This award itself cannot feed the world on its own. But this is the start of a new chapter for us — it will allow us to think beyond the next hurricane to the bigger challenges we face. People of the world: now is the time to think really big, to solve hunger with the fierce urgency of now.

“The thing we want to do is revolutionize disaster and hunger relief. People don’t want our pity, they want our respect … the least we can do is be next to them when things get tough.”

Bezos, one of the richest people in the world, gave away approximately .08% of his net worth with the $200 million total donation to the award recipients.

Andrés recently announced a new restaurant space in Chicago with four of his concepts set to open this fall.