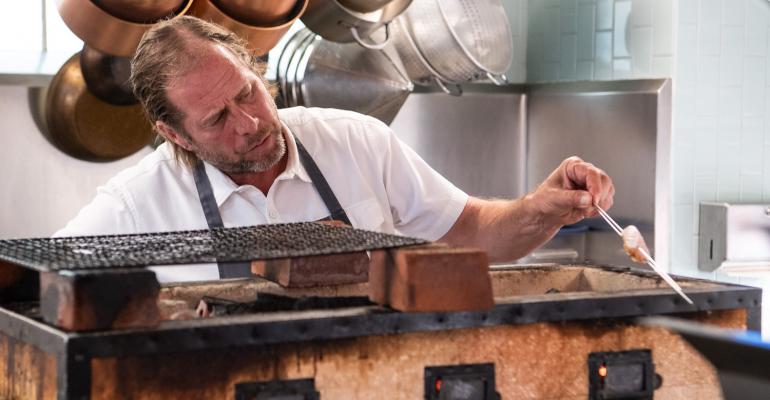 Marc Fiorito
David Kinch will be leaving his position as chef of Manresa at the end of the year,
People

David Kinch, the award-winning chef and owner of Manresa in Los Gatos, Calif., is leaving the restaurant after 20 years as of Dec. 31, to focus on his more casual projects, The Bywater, Mentone and Manresa Bread.

The future of the restaurant is “up in the air” at the moment, a public relations representative for Manresa said in an email. Although she said Kinch hopes the space will remain as Manresa, the press release announcing the chef’s departure also included information for people interested in the space at 320 Village Lane in Los Gatos. It said they should contact John Machado of property firm Colliers International.

“I fell in love with cooking, restaurant culture, and the art of hospitality growing up in New Orleans,” Kinch said in a statement announcing his departure. “From that point forward, I set my sights on creating a home in this industry, and it has been my sole focus ever since — often at the expense of cultivating other aspects of my life, both professional and personal. For the past 20 years, Manresa has essentially been my whole life. And like all passion projects, it has been more challenging and more rewarding than I could have imagined.”

Manresa has been a Bay Area landmark since it opened, focusing on the food of California’s Central Coast. It has been awarded three Michelin stars, five stars in the Forbes Travel Guide, a diamond rating in AAA, ranking as one of the top 10 restaurants internationally by La Liste, inclusion in the World’s 50 Best Restaurants and much more. Kinch himself has won a James Beard Foundation award for Best Chef in the Pacific region, was named Chef of the Year by GQ magazine in 2011 and won an Emmy award for his participation in the PBS television series “The Mind of a Chef.”

Kinch said his departure would allow him to focus on New Orleans-themed The Bywater, Mentone, which focuses on the cuisines of the French and Italian riviera, and Manresa Bakery which he operates with founder and head baker Avery Ruzicka.

“A three-Michelin-starred restaurant requires nothing less than your best,” Kinch said in his statement. “One could always find me in the kitchen as I prided myself on and loved being a working chef, with our team, behind the stoves. This is back-breaking work that demands you show up at your fullest every day, no excuses. Starting January 1, I hope to establish a new equilibrium, to focus on the next exciting chapter of my life. I’m looking forward to dedicating my professional efforts on The Bywater, Mentone, and Manresa Bread, and having the time and freedom to explore some exciting new pursuits, and revisit long-neglected passions.

“I’m immensely proud of our team’s perseverance and all that we’ve accomplished. It’s been my privilege to create a home at Manresa for all of our honored guests, friends and family, and each team member past and present, who has dedicated time to hone their craft in the kitchen or create hospitality in the dining room. I am grateful and feel blessed for their dedication and contributions to making the restaurant what it is today — the best that we can be.”

Until his departure, Kinch will be working with chef de cuisine Nicholas Romero and pastry chef Courtney Moisant to offer a series of seasonal menus featuring new dishes and beloved classics.

“Until the end of the year, I look forward to a joyous four months, welcoming back all who have supported us over the years to enjoy the restaurant one last time in its current iteration,” Kinch said. “Let’s have a party and celebrate together! We can’t wait to see you all soon. As [The Rolling Stones’] Keith [Richards] would say: ‘Got to move while it’s still fun.’”