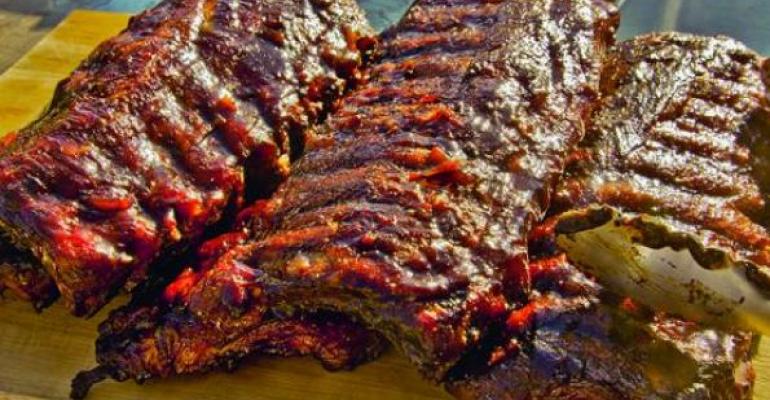 May is National Barbecue Month, kicking off the grilling and barbecuing season. Now is the ideal time to consider adding a few new barbecue items to your menu. That’s where Meathead Goldwyn’s new book Meathead: The Science of Great Barbecue and Grilling (Rux Martin Books; Houghton Mifflin Harcourt, $35, May 2016) comes in, with ideas to inspire any barbecue aficionado. With Greg Blonder, PhD, serving as science advisor, this informative and entertaining 400-page volume by Restaurant Hospitality’s former contributor demystifies the science, debunks some prevalent barbecue myths and just plain renews your enthusiasm for grilling. At this writing, Meathead: The Science of Great Barbecue and Grilling is the number one cookbook on Amazon.com.

In case you’re wondering just how big barbecue is, consider this: Meathead’s website, AmazingRibs.com, is one of the 50 most popular food websites in the country, with over a million unique visitors a month. He explains that for millions of years—perhaps since the time a hunting party probably first stumbled across a charred animal carcass after a forest fire—humans have been struggling to master fire, heat, smoke and meat. In his book’s introduction, Goldwyn writes, “Along the way, I use science to filter the hogwash, bust the myths and take down the old husbands’ tales and canards passed along by pit masters whose rituals have gone largely untested since that first forest fire.”

Throughout the book, Meathead shares proven techniques and tips as well as recipes—all illustrated with hundreds of his own colorful photos. For example, he suggests combining sous vide cooking with grilling to get the best of both worlds. “Sous vide results in tenderness and juiciness. If you combine that with cooking on a wood-burning grill, you really come out with something special—a dark crust, without overcooking the interior.”

Speaking of wood-burning grills, he says many restaurants are putting in wood-burning grills now—for the show as well as the flavors. “The cooking techniques are very different—line cooks have to learn how to cook differently. Smoke is an exotic flavor that you don’t get on the spice rack, and these big flaming grills make it even more showy, with flames licking, food sizzling and cracking, cooks mopping sweat off their brow and burning the hair off their arms….”

Here are a handful of the 30+ myths that Meathead busts in his book, backed up by experiments and detailed explanations.

Myth: You should soak wood before using it.

“That immediately cools off the fire.  They build boats out of wood for a reason: Wood doesn’t absorb water. All that white poufy smoke you see when you throw wet chips on the fire is steam. It won’t smoke until the water is steamed off,” Meathead says.

Myth: Meat should be brought to room temperature before cooking.

Myth: You should sear first, then cook.

Meathead says it’s a good technique for braising, but when grilling, it overcooks much of the meat. If you cook at a low temperature first and then sear at the end, the result will be more even interiors and a better crust.

Myth: After an hour or two, meats stop taking on smoke.

“Meat does not have windows that shut as it cooks. If the surface of the meat is cold or wet, more of the smoke sticks.”

In a series of marinating experiments, a variety of meats and vegetables were marinated along with green food coloring to see how deep the coloring penetrated. Seafoods and some vegetables absorbed the coloring deeply, but for other meats, the coloring never got much past the surface. “It is particularly graphic, because you can see the color,” Meathead explains.