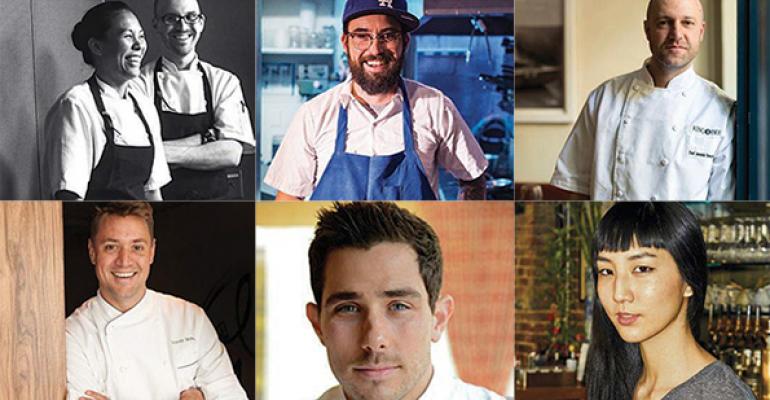 Thanks to talent, vision and hard work, this year’s crop of budding legends is going places. Meet 15 (actually, 17) of today’s foodservice trendsetters.

It takes courage, imagination, passion and so much more, along with a dash of luck, to succeed in a competitive field like restaurants. A lot depends on strategy—concept, location, menu, staffing, prices, timing, design, signage, suppliers, marketing, technology and other factors. It’s tough to get everything right, but when a restaurant clicks, it’s magic.

Restaurant Hospitality’s annual list of people to watch, launched in 2010, spotlights individuals and teams who have tapped into that magic. Let’s check in on what some of them have done since they appeared in these pages:

➤ We hailed Matt Accarrino (class of 2010), executive chef at San Francisco’s SPQR. Since then, he has published his first cookbook and last year finally got the attention of Food & Wine, which named him a “best new chef.”

➤ Amanda Cohen (2011) has pushed the definition of serious vegetarian cuisine at her Dirt Candy restaurant in NYC’s East Village—and scored a Michelin start in the process. Cohen, a prominent voice in the tipping debate, continues to blaze trails, recently initiating a 20-percent service fee that the entire staff will share.

➤ Dale Talde (2012) hit a home run with his first restaurant, Brooklyn’s Talde. He and his partners continue to roll out the concepts, including Pork Slope and Thistle Hill Tavern, both in Brooklyn.

➤ The flagship of Jeff Mahin’s (2013) Stella Barra Pizzeria concept is killing it at a once-cursed site in Hollywood; the brand has since expanded to two additional locations. Mahin, a protégé of Richard Melman, is also the driving force behind several other LEYE concepts: Summer House Santa Monica (Chicago), Do-Rite Donuts (Chicago), and M Street Kitchen (Santa Monica).

➤ Gregory Gourdet (2014) continues to wow jaded Portlandians at Departure, and at press time he was one of three remaining cheftestants on Top Chef. He’s also been tapped to open a second Departure, this time in Denver.

Lettuce Entertain You Enterprises to create culinary experiences for the St. Regis hotel in Chicago
Oct 06, 2022