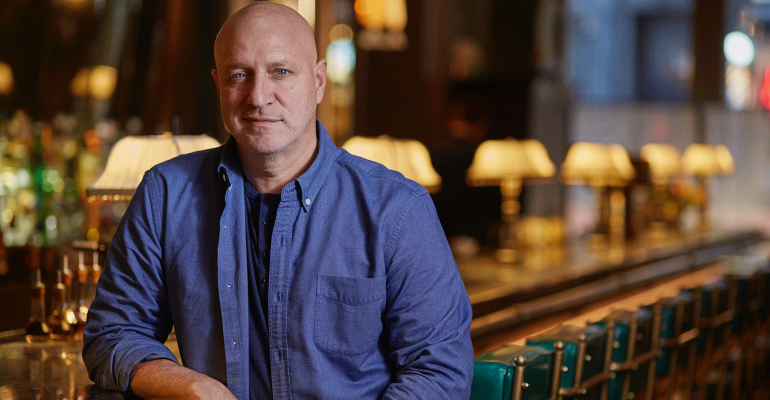 Crafted Hospitality
Tom Colicchio is one of the founding members of the Independent Restaurant Coalition.
People>Owners

The IRC was formed in response to the effects of the COVID-19 crisis on independent restaurants, and they’re asking Congress for loan extensions and business insurance interruption coverage

On March 17, the White House held a conference call with restaurant operators to discuss how the coronavirus pandemic has and will continue to impact the restaurant and hospitality industry. Every single one of the operators on the call was an executive from a national restaurant chain and no independent operators were invited to join the call.

This was part of the chain of events that spurred Tom Colicchio (Crafted Hospitality), along with several other major restaurant operators and chefs, including Kwame Onwuachi (Kith and Kin), and Naomi Pomeroy (Beast) to form the Independent Restaurant Coalition. Launched in a time of crisis, the IRC is an activist organization designed to advocate for the needs of small restaurant businesses during and after the COVID-19 pandemic to local, state and federal governments.

On April 6, the IRC published a letter that was sent to Congress detailing all of the actions they think the government needs to take to protect restaurants, along with the 15 million workers the industry employs nationwide.

“This is an unprecedented situation that the country finds itself in,” Tom Colicchio said during a press conference call on April 6. “[When we first started talking about this], it became clear that we were going to need a huge federal response to support workers, restaurant owners and all of the ancillary businesses that we connect to. […] We did not have a way for us to all work together and let feds know what our needs are, we formed the coalition in a matter of two to three days.”

To protect businesses from going bankrupt around the country, the federal government has passed a $2 trillion economic stimulus plan, the CARES Act, signed by President Trump on March 27, which includes initiatives like the launch of the Paycheck Protection Program, launched April 3, which is designed for small businesses to take out loans in order to pay their employees during the crisis.

But as the program gets off to a rocky start with banks allegedly being unable to handle the flood of small business loan requests, the Independent Restaurant Coalition is saying that these federal government initiatives are not enough of a lifeboat to save the sinking restaurant industry.

“We really appreciate that Congress is passing legislation but as independent restaurant owners, we’re not sure how we fit in,” Naomi Pomeroy said during the conference call.

The letter that the IRC sent to Congress outlines several proposed changes that the organization strongly urges the federal government to consider, including:

Fixing the Paycheck Protection Program so it’s easier for small businesses to take advantage of the loans — The proposed changes include an extension of the maximum loan amounts from eight weeks to three months, and an extension of the loan repayment program from two years to 10 years. As it is written, independent restaurants will likely still be closed and will need to lay off their workers again after the brief time period is up.

The organization also suggests expanding the $350 billion loan investment to allow for the estimated $1 trillion in requests from interested applicants that the program is likely to trigger. The IRC is also asking Congress to reinstate the $500 million gross revenue cap that was included in an earlier version of the act that would protect small businesses from getting shut out by larger chains.

“The Paycheck Protection Program is flawed when it comes to businesses that are already shut down,” Pomeroy said. “I have also heard a lot of restaurants are unable to apply if they don’t have prior debt with a bank, that you’re not prioritized unless you have open credit.”

The IRC calls for $100 billion in grants for independent operators that will give them the cash flow necessary to survive until they are able to reopen.

Creating new tax rebates would give restaurants incentives to continue paying their employees and investing in their business to stay afloat until everything returns to state of (relative) normalcy.

“We have 11 million [independent restaurant] workers out of work,” Kwame Onwuachi said during the conference call. “We should have a job provider rebate that rewards restaurants based on how many people they can hire. A rent rebate would ensure some relief too.”

A major challenge for businesses has been the hurdle of cashing in on business insurance interruption claims. Restaurant owners have begun fighting insurance companies in court for claiming the pandemic is not covered because there is no “physical loss or damage” if a restaurant is mandated to shut down by government lockdown procedures.

“These lawsuits will take forever to make their way through the courts, and we don’t have time to wait on this,” Colicchio said during the conference call. “Anything that will take that amount of time, we don’t have that luxury right now.  So yes, it would be great [to get business interruption insurance guaranteed] but it’s a longshot.”

The IRC has emphasized in both the letter to Congress and during the conference call that their “list of demands” is meant to offer the tools necessary for the restaurant industry to return to business as usual.

“We’re not looking for a bailout, we want to get to work when we can,” Colicchio said.