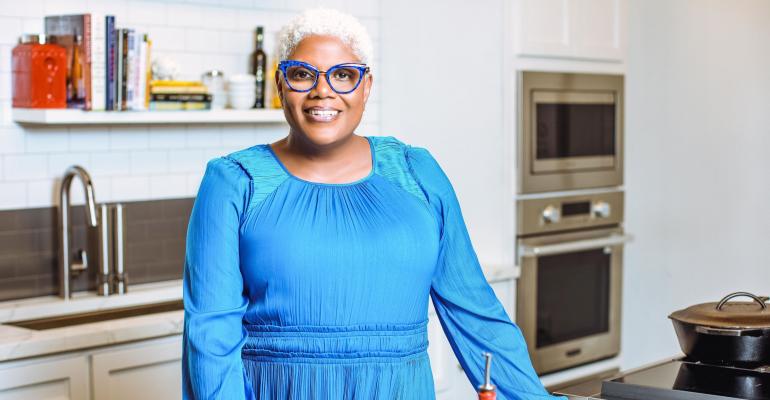 Deborah VanTrece first got national attention as a chef and restaurateur in Atlanta with the 100-seat restaurant Twisted Soul Cookhouse and Pours, which opened in its current 2,600-square-foot location in 2016, and, at the time, seemed not big enough.

One pandemic, a cookbook and three new concepts later — with a fourth on deck — VanTrece is thinking big about growing her VanTrece Hospitality Group, though now she’s going small with her restaurants.

If there’s one thing she learned from surviving the dining-room shutdown of 2020, it’s that the spaces where she operates will be smaller, she said.

“I was at a point [before the pandemic] when I was looking for bigger space. We need bigger! We need bigger!” she said. “And now I’ve completely gotten that out of my head where I don’t want to take that big space, the challenges — not just the expenses related to it, but even the employment.”

In April, VanTrece opened the new Oreatha’s at the Point in Atlanta’s Cascade Heights neighborhood, a 1,500-square-foot upscale-casual spot with about 59 seats and named for her mother.

It’s a concept designed to pay tribute to mothers around the world, with the type of dishes that might be handed down from grandmothers to mothers to daughters, like smoked duck pot pie, a German-style lamb shank with chocolate stout demi and sweet potato spaetzle or a dessert called Persian Love Cake. VanTrece, who was a flight attendant when she was younger, has lived around the world and has picked up culinary influences in her travels.

Oreatha’s is a restaurant that is clearly “owned by women and about women,” she said, though not overly feminine.

VanTrece’s daughter, Kursten Berry, is the beverage director for the group, and will soon add to the restaurant family.

A stone’s throw away from Oreatha’s will soon be the new Dulcet, scheduled to open this fall as part of VanTrece Hospitality Group. Dulcet will be designed by Berry, with VanTrece as creative director. This concept will have a greater emphasis on the 40- to 50-seat bar, which will be membership only, though the 26-seat restaurant side will be open to all, VanTrece said.

And coming in July is the new Serenidad, which is next to Oreatha’s. At Serenidad, the menu will focus on “Latin soul,” but with a more tranquil atmosphere, she said.

“I’ve gotten so frustrated with the American version of the food from Latin countries, or Latin-influenced countries. We wanted something that you would actually experience in those countries, which is a little more serene and quiet and tranquil,” she said. “You walk into Mexican restaurants [in America] and it’s bright red and bright orange. We wanted to take a different route.”

The proximity of the three new restaurants is very deliberate.

VanTrece said she is building a team that is cross trained within all group’s concepts. Chefs Whitney Thomas and Christian (“Lucky”) Bell can overlap and support each other — with VanTrece also available to step in. The goal is to offer a schedule that allows the team to take time off for family or traveling, as needed.

VanTrece said the pandemic forced her to reduce operating hours at Twisted Soul, and she found the restaurant became more profitable.

“So we’re sticking with that, by making sure there’s plenty of rest time, down time, for staff to rejuvenate,” she said. “That’s not something in the past that we put a lot of emphasis on, making sure we’re taking care of ourselves.”

Oreatha’s and Dulcet won’t offer lunch hours, for example. VanTrece said she’s leaving it to Thomas to decide whether Serenidad will offer lunch.

“It’s about having a strong support staff, paying good wages … and my being on premises, on site, on a regular basis is helpful,” VanTrece said. “I can fill in if someone’s tired. It’s about building trust within our organization and it’s a very close-knit group.”

And the group is still growing.

VanTrece is now looking to purchase a building for the next concept. During the pandemic, Twisted Soul closed its dining room and operated as a fast-casual concept for to-go and delivery that was called A Different Kind of Chick, offering a more healthful alternative to the ubiquitous fried chicken concepts that thrived during those years.

A Different Kind of Chick did very well, VanTrece said. Now she sees it as a potential growth concept for the group.

“A Different Kind of Chick has been on paper for 10 years now. I hadn’t found that perfect space, so now we’re looking for that,” she said. “But we’re not rushing it. We have a lot on our plate, so I feel like the universe will time this out perfectly.”