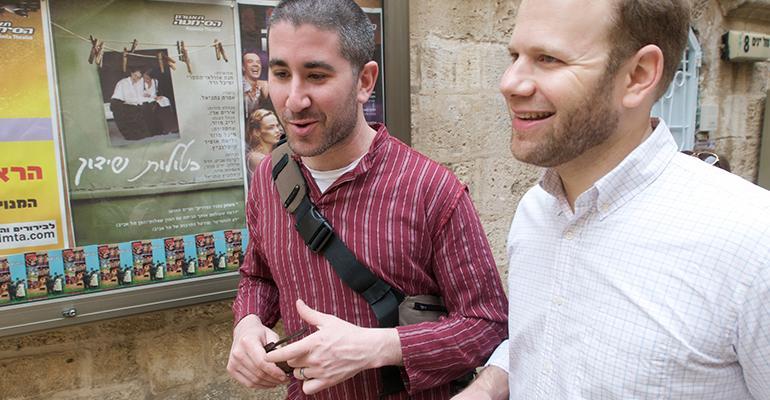 It’s an exciting time at Michael Solomonov and Steven Cook’s CookNSolo restaurant group. Earlier this month, the partners’ cookbook, Zahav: A World of Israeli Cooking, was named a finalist for the James Beard Foundation award for Best Cookbook, International. CookNSolo also seems to be on the cusp of a nice little fast-casual empire in Philadelphia, as the group's Federal Donuts concept hits five units and counting, and as they prepare to open their first venture outside Philly: In April, CookNSolo will take its Dizengoff hummus-based concept to New York’s Chelsea Market food hall. Also on deck: a passion project for Cook and Solomonov, Rooster Soup Company, set to open this spring. It’s a casual luncheonette, paid for in part by a Kickstarter campaign that raised about $180,000 from 1,500 backers. What’s special about the concept isn’t just Solomonov’s mind-blowing soups, but the fact that the business will exist solely to fund Philadelphia’s Broad Street Ministries, which provides free community meals.

Since the opening of the partners’ acclaimed Zahav in 2008, CookNSolo has become synonymous with elevated and creative takes on Jewish culinary traditions, from the Mediterranean flavors of Israel to Eastern European dishes and deli classics. Zahav wowed customers and critics with its modern, chef-driven Israeli cooking—which has been described as simultaneously exotic and comforting. Items such as a simple Israeli hummus made with organic sesame seed tahini to a caramelized lamb shoulder braised in pomegranate juice have generated a lot of favorable buzz for CookNSolo in recent years, including Solomonov’s 2011 James Beard honors for Best Chef, Mid-Atlantic. Solomonov has been on Restaurant Hospitality's radar since 2006, when we named him a Rising Star.

Cook (the son of a rabbi and a former investment banker before he went to culinary school) and Solomonov (born in Pittsburgh but raised partly in Israel) first came together at Cook’s first solo project, Marigold, in 2005. For Solomonov, who had been working at the acclaimed Vetri before teaming up with Cook, the food of Israel had been part of his DNA since first discovering it as a teen. It became a more conscious inspiration after a family tragedy, however. In 2003, Solomonov’s brother, David, a member of the Israeli Defense Forces, was killed by a sniper while patrolling the Lebanese border. He was just 21. Zahav: A World of Israeli Cooking opens with a poignant dedication to David Solomonov: “You are with me always.”

The duo balance each other. Solomonov is the public face of the restaurants, regularly described as charismatic and edgy; Cook is known as sharp, but reserved. They collaborated on their first book, Zahav: A World of Israeli Cooking and took some time to discuss that, as well as what’s happening now and what’s next for CookNSolo.

Cook: There’s a difference between Israeli food and Jewish food. Jewish food is included in Israeli food, but not all Jewish food is Israeli. As food culture continues to strengthen in America, and while the restaurant business has simultaneously become increasingly competitive, people are naturally looking for that competitive advantage. To me, one of the biggest advantages you can have is to be authentic. So it only makes sense that a large amount of Jewish chefs are popping up and cooking through their traditions. I think we’re a part of that. Both Mike and I have been cooking that way for some time—even back at Marigold Kitchen over a decade ago. Gone is the notion that restaurant food has to be fancy. The formalities of restaurant dining have been stripped away over the past 30 years, and this has paved a road for the exploration of cuisines that were thought to be “lesser” for so long.

Michael, you moved from Pittsburgh to Tel Aviv when you were a teenager. Did it have a great impact on your career?

Solomonov: It absolutely did. At the time, I wasn’t that into food, but I learned about Israeli culture through the lens of food.

How do you guys define Israeli cooking? It’s a young country and geographically close to the Middle East and even East Africa. How is it similar and different from the other cuisines of the region?

Cook: Israeli cooking is similar in that it has elements of many of those cuisines, but is mostly different because it is so young and the canon is not closed. There are new people arriving in Israel every day, which means new flavors are entering the canon every day. One of the most common misconceptions is that Israeli food is solely Middle Eastern food. Much of it is, but the early days of Israel were Germans and Russians, in addition to the local population. There were Balkans and North Africans–and the list goes on. That’s what makes it special. We say in the cookbook that in Israel, you can’t travel 5 minutes without seeing a borekas [flaky fried dough filled with vegetables or meat] shop. You would rarely see one before 1950. The same applies to Yemenite [heavily spiced and rustic soups, stews and breads] food. There are so many deeply rooted cultures that are still making such a huge impact and becoming a part of Israeli cuisine.

A game-changer for chicken soup

Did the interest in an Israeli restaurant by a broad audience surprise you?

Cook: Absolutely. For a while, we debated whether our food was Israeli or Middle Eastern. In keeping it authentic, we went with Israeli but weren’t sure how it was going to be received. An Israeli restaurant had a lot going for it from the start. It’s often perceived as healthy, vegetarian and vegan-friendly (which is another huge wave that we’re riding). But I do think that now more than ever, diners are inclined to trying things that they would have otherwise been afraid of. This is happening in every cuisine.

Tell us about Zahav, the book. It’s not a traditional cookbook. [It is part memoir, part oral history, funny and poignant] What was the goal behind it?

Cook: We could have made a cookbook as early as six years ago, but we wanted to wait until we had a story to tell and a point of view. For a restaurant that is far from Israel, Zahav has a lot to say about Israeli cuisine and has a point of view that is unique. When Mike and I realized that, it was then that we felt it worthwhile to tell that story.

Solomonov: I wouldn’t say he is so much a part of my [restaurant] cooking. The meaning comes from cooking Israeli food in general, and specific dishes that my brother and I ate together, like borekas or pastel. Pastel is meat pie, and it was my brother’s favorite thing to eat.

How did the idea for Rooster Soup Company come about?

Solomonov: Yes, because you can usually make it in one pot. That makes it clean cooking in more ways than one, because soup can be super healthy. There’s also something about the layering and fortifying of flavors that’s indefinitely interesting to me.

What are your favorite soups?

Solomonov: My favorite is Yemenite Chicken Soup. [Solomonov describes it as savory and homey, with a pungent Yemenite spice blend of turmeric, cumin and hawaij black pepper.] Especially when it’s made with a kosher bird. The salt content in kosher chicken creates a rounder, more chicken-y flavor. It’s a move that I would recommend everyone make, starting now.