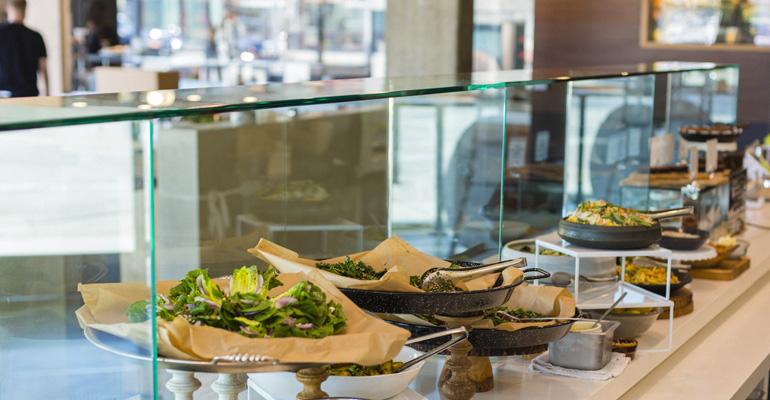 The farm-to-table movement hit a road bump recently after news reports brought some restaurant menu claims about “local” or “sustainable” ingredients into question.

In an article titled “Farm to Fable,” the Tampa Bay Times in April spotlighted restaurants that made misleading claims about farms supplying some ingredients. In another article last year, San Diego Magazine found similar false claims made on the West Coast. One attorney sees potential legal ramifications coming down the pike.

Some call it “sustainability washing,” and many restaurant operators welcome the opportunity to separate the pretenders from those making authentic claims.

But at the same time, it puts pressure on those building concepts around local, fresh and sustainable ingredients to ensure the stories they tell about the food on their menu are true.

Picnic LA is a fast-casual concept that opened in January in the Los Angeles neighborhood of Culver City.

Ellis, who previously was cofounder of the high-end Red Medicine in Beverly Hills, CA, said Picnic LA is casual in terms of its cafeteria-style format and stripped-down décor, but super premium in terms of ingredients. His goal is to source entirely from California, using produce from only small family farms.

Here’s what Ellis had to say about the “farm to fable” debate:

How would you describe Picnic LA?

It’s based on the idea of a spread of beautiful-looking food, made with very high-quality ingredients, but simply prepared. It’s really the way chefs cook at home.

I come from a full-service, fine-dining background, so we’re using the same vendors we had at these other restaurants, but we stripped away everything that was unnecessary overhead. There’s no table service. You walk through a line. There are not a trillion garnishes on things. But the asparagus we buy is Zuckerman’s, which is from Stockton, CA, and that’s the same we used when I worked for Michael Mina and the same we used at Red Medicine. It’s those best ingredients, treated simply.

What values do you convey about your ingredients?

We’re still trying to figure out the verbiage. For seafood, we’re buying from International Marine Products, which is a really great Japanese fish purveyor downtown, most of the sushi places and fine dining restaurants use them.

For meat we work with Rocker Bros. Our pork is from Stone Valley Ranch. Beef is 100-percent grass fed, or from Aston Ridge if we’re using grain-fed for something else. The chicken is either Jidori or Mary’s right now.

For produce we’re trying to get to the point where we’re buying 100 percent from small family farms, which means 98 percent of that comes from a farmer’s market. We’re working with someone who shops for us at the farmers’ market. Her name is Linda; she calls herself the Farmers’ Market Fairy.

It’s really easy to get farmer’s market tomatoes or squash or asparagus. But the nitty gritty is onions, garlic, shallots, carrots, lemons and limes, and herbs; stuff you go through a lot of and it tends to be this utility grade. There are not a lot of restaurants that aren’t unbelievably high end that are using an heirloom variety of lemons for their standard lemon juice.

So I’d say we’re at a point where probably 80 percent of our produce is coming from small family farms at the farmers’ market.

How do you communicate that to your guests?

Honestly, we’ve been doing a really terrible job of that. We’re still trying to figure that out. We think in-store signage is a component, and we’re looking at digital displays with photos of the farms or farmer’s markets.

It’s a real challenge. We’re in a space right now where you have the Tampa thing going on where people are either incorrectly, maliciously or just through lack of follow up, mislabeling their food. And you might see in restaurants a chalkboard with the farms they used and that sounds really great, until you look up these farms. Maybe it’s owned by one family, but it’s enormous. It’s a conglomerate that’s buying from other growers. And stuff is not being raised nicely and it’s not necessarily sustainable.

We haven’t figured out how to address that yet. Calling something farm to table has lost meaning now. It takes away from places that truly are.

How do you know the arugula you’re buying at the farmers’ market is actually from the farm that’s selling it?

Totally. Each county does enforcement on that, but it’s really challenging to know. There are 20 or 30 farms well known in the industry that restaurants I’ve been involved with have used. I know their products, I’ve been to visit a lot of them. So I know when we’re getting onions from Shaner, they’re onions from Shaner.

It sounds like you’re saying it’s very difficult to make accurate claims about where your produce is coming from.

We do it for us. My wife’s a farmer, so I really believe in this. She has a small family farm about two hours away.

I have a lot more respect for the ingredients because maybe I don’t know the exact guy who grew the onion, but I might know the guy who planted it and who is out farming regularly. I try to transfer that to my staff. And everything just tastes a little better.