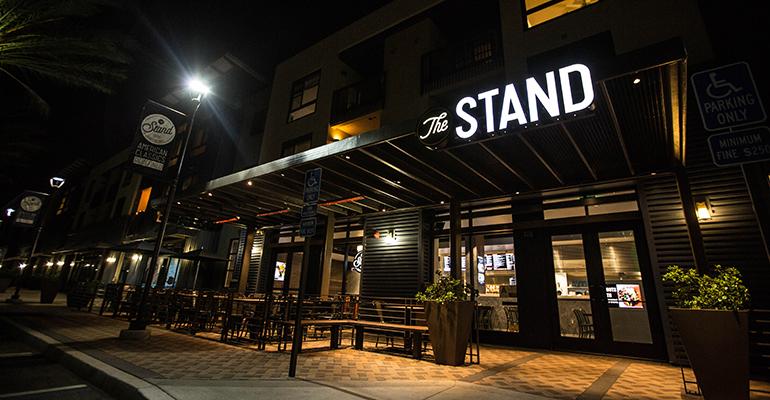 How does a sudden influx of funding change a small restaurant business? That’s what The Stand is in the process of finding out.

The Los Angeles-based concept started in 2003 with a simple burger and hotdog menu. Founder/c.e.o. Murray Wishengrad gradually grew the concept into a fast-casual operation with a broader lineup of offerings and three units. Then, last August, Wishengrad got the call most restaurant owners only dream of: a venture capitalist offering a boatload of cash to grow their business.

In the case of The Stand, that investor is Andrew Jhawar of Apollo Global Market. He’s the 44-year-old hotshot private equity pro who grew Sprouts Farmers Markets to a company producing $930 million in annual sales and rescued Hostess Brands to put Twinkies back in the cupboards of a grateful American public. Jhawar was a regular customer of The Stand’s Century City location. He liked the concept so much that he sought out Wishengrad and proposed a partnership in which he’d personally invest the funds to open a The Stand’s fourth unit (Northridge, CA) as well as an aggressive growth campaign to take both concepts throughout and beyond Southern California.

Wishengrad, who had brought onboard his son, Jason, as executive v.p. and culinary director in 2010, says what intrigued Jhawar was The Stand’s unique food proposition—a fast-casual operation with a menu selection rivaling that of a casual dining restaurant—about 40 items including burgers, sausages, salads and hot and cold sandwiches.

“We call our menu American Classics Reinvented,” says Jason Wishengrad. The menu is engineered with items that take a long time to prepare but can be finished quickly. Consider the Porchetta Sandwich ($9.75), for example. It takes up to 24 hours of prep work, but holds beautifully and is finished by caramelizing and plating it in six minutes. “That’s the philosophy throughout the menu. Put a lot of prep into it, but make sure that when it comes to service, it has to happen in six to eight minutes or it doesn’t make the menu.”

The Wishengrads say sales at each of the first three units of The Stand grew by 20 to 30 percent each year over the past five years. “The key to succeeding in the fast-casual business, we think, is being in a position to offer and make food that they [customers] can’t or won’t make at home. If they can make it at home and make it as well as we can, there’s no need for us,” says the senior Wishengrad.

He credits much of the boost in same store sales to a focus on the evening daypart. “The typical problem with fast casual is attracting customers in the evening. We’re now getting as much revenue at night as during the day by focusing on the night environment…new lighting, music, a variety of seating options and large tables, four large TVs set to sports, even a shuffleboard table. Anything you can do to make it feel less ‘fast-casual’ will help in the evenings.” The Stand is also expanding its alcoholic beverage program. While the bars at the current units feature six taps, future units will have 12 to 16 brews on tap.

The Stand underwent a redesign in preparation for further expansion. Gone is the original art deco décor featured in the original units and in its place is a contemporary-but-warm aesthetic. The Stand will open its next set of doors this August in Irvine, CA. The Wishengrads also are working on deals to launch in the Valencia and Manhattan Beach markets later this year. They expect to open three to four restaurants between L.A. and San Diego per year until they hit the 15 or 20-unit mark. After that, they will set their sights on markets in Arizona, Nevada and Oregon.

In some locations, The Stand will operate alongside the Wishengrads’ other restaurant, TLT Food (which currently has two locations). TLT is “a more foodie-oriented fast-casual concept,” explains Murray Wishengrad, with modern, elevated riffs on ethnic items such as a the Pork Belly Adobo Taco ($4) made with braised pork belly, pico de gallo, sambal and cilantro; or the Chimi Noodles ($8) with chilled udon noodles, chimichurri, spicy lime-sambal sauce, peanuts, arugula, pickled red onions and a choice of proteins (pork belly, steak, short ribs, carnitas, marinated tofu or ahi).

“We’re ready to move forward and now we have the capital resources to do that because of Andy Jhawar,” says Murray Wishengrad.