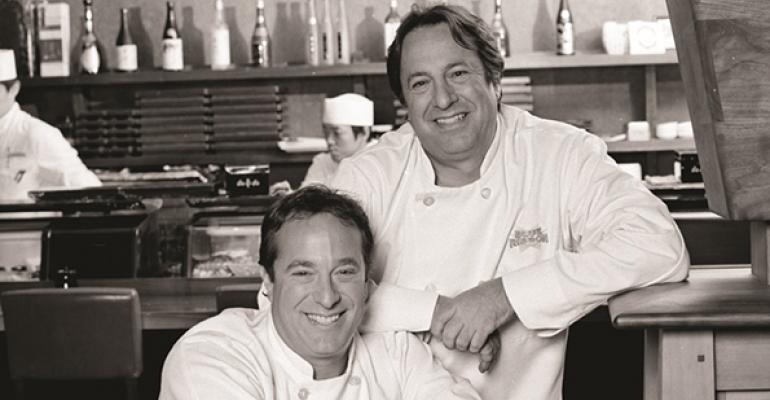 The brothers behind the Blue Ribbon Restaurants group this fall will add a new American grill concept to their growing portfolio.

The planned Blue Ribbon Federal Grill is scheduled to open in the new AKA Wall Street all-residential hotel in the heart of Manhattan’s Financial District.

Bruce Bromberg, who cofounded Blue Ribbon with his brother Eric Bromberg, said they were both inspired by the location, which is on a sunlit street across from the Federal Reserve in a part of downtown that has come back strong in the years since 9/11.

“We’ve always been a downtown group, but just not quite that far downtown,” said Bruce. “But from the moment the towers came down on 9/11, there has been an incredibly strong desire to be part of the regrowth, the rebuilding of that area.”

Blue Ribbon Restaurants opened a Blue Ribbon Sushi Bar next to Ground Zero in Brookfield Place a couple years ago, he noted.

“But it’s still a cathartic experience to walk down those streets with a completely different outlook from that night (of 9/11) when we were feeding people down there and standing in the rubble,” Bruce added.

In keeping with the Blue Ribbon theme of elevated-but-accessible menus, Federal Grill will offer simple American fare, including the steaks, burgers, fish and chops typically found at a local grill, but “done with a more delicate hand and a higher appreciation for the product,” said Bruce.

“As we grow older and spend more time in the industry, you tend to start searching out the simpler, more pristine ingredients and treat them with more respect,” he added.

The menu at Federal Grill is still under development, but the restaurant will offer breakfast, lunch and dinner – though not roomservice or food-and-beverage operations for AKA, which is an extended-stay hotel.

Heading up the kitchen will be Matt Deliso, who has been with the group for about 12 years.

Federal Grill will be the eighth concept for the group, which is scheduled to open its 20th restaurant in Miami later this year, the seventh location of the Blue Ribbon Sushi Bar & Grill concept, which is opening in a South Beach hotel. The group will later add a café as well as a taqueria and tequila bar there. Blue Ribbon Sushi restaurants are also in New York, Las Vegas and Los Angeles.

Bruce said growth is also in the works for Blue Ribbon Fried Chicken, which has locations in Las Vegas and New York. A second New York unit is scheduled to open in 2017.

And, in Las Vegas next year, a location of the original Blue Ribbon concept is scheduled to open in The Cosmopolitan resort and casino, he said.

“Everyone tells us to stop making new ideas and just make what we’ve made, but there’s always a desire to improve,” said Bruce.

The group also works to grow talent from within. Of the original 14 employees who opened the first restaurant, 11 are still with the company, now as partners running various restaurants.

With growth, however, has come the challenge of working through all the legal and bureaucratic hoops in each state, he added.

“Today you need teams of people just to deal with the various laws, the bureaucratic situations, the breaks of employees and all these different issues that are constantly there,” he said.

Bruce said he often misses the days when he and his brother would just cook.

“I remember so fondly back 24 years ago when we just cooked and just cooking was enough,” he said. “That’s what drove our lives and our restaurants. It was that unabridged joy of reveling in the culinary world.”