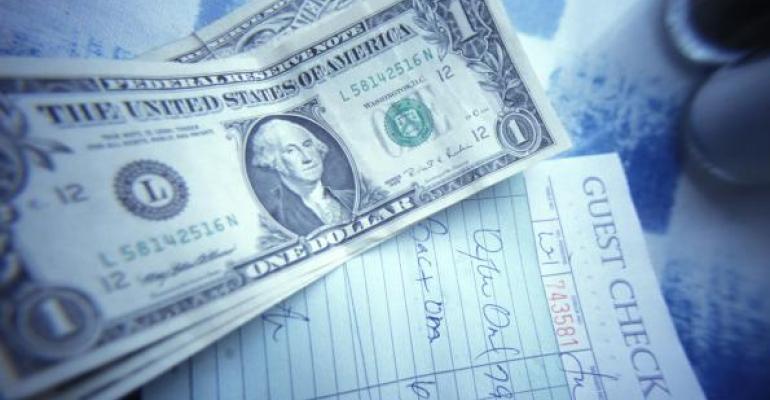 Many restaurant operators are watching from the sidelines as a few experiment with a move away from a gratuities. Some of those pioneers have shared lessons learned in recent weeks.

Houston-based restaurant chain Joe’s Crab Shack, for example, earlier this month cut back on its no-tipping experiment to just 4 restaurants from 18 after workers and customers expressed their dissatisfaction with the model.

Joe’s Crab Shack customers in some markets said they felt they lost control over incentivizing servers. They also didn’t trust management to pass on menu price increases as wages to employees.

Still, Joe’s officials said the test will continue in four restaurants so the chain can better study why it seems to work better in some markets than others.

Meanwhile, in Los Angeles, Andrea Borgen last month made the switch to a hospitality-included model at her restaurant Barcito, where she is owner and g.m.

Borgen is an alum of Danny Meyer’s Union Square Hospitality Group, which is being watched carefully as a pioneer of the no-tipping movement.

At Barcito, a dinnerhouse with only 12 employees that opened in September 2015, the move included an increase in menu prices that averaged about 22 percent, a steep jump overnight.

Borgen, however, said a key aspect of the switch has been the move to revenue sharing for servers.

Here’s how Borgen described the initial response to her restaurant’s attempt to eliminate tipping:

What prompted you to make this move?

It starts with the notion of tipping in general. I think that system is broken in so many ways and for so many reasons.

As a guest, the experience is supposed to be about hospitality, but had become monetized and it’s awkward, both for the guest and the employee. As an employer, the notion that a stranger from off the street could determine what my employees took home at the end of the night is sort of a scary and backward thing. It’s something that has bothered me for a long time, and I think a lot of people in industry would agree it’s a weird and antiquated system.

For Barcito, what is revenue sharing?

In order to compensate front of house, as opposed to paying a flat hourly rate, Danny takes a percentage of top-line in-house revenues. That means any sales generated in-house that would have been tipped on under the previous model. That percentage is distributed to front of house employees on a tiered, weighted point system, similar to the way we’d distribute a nightly tip pool previously. There’s a hierarchy: Bartenders make the most, then servers, then hosts. That system is almost identical to what we’re doing, except it’s on a weekly basis and based on 13 percent of in-house revenue.

And the back of the house?

They don’t participate in revenue share, but we were able to give them a bump in wages. And, under this model, we are able to provide health insurance for everyone as well.

We found the back of house prefers to have a fixed hourly wage and know exactly how much they’re making, as opposed to the front of house, which is more accustomed to ebb and flow.

Of course, there is no tip credit in California. So how were wages impacted?

Front of the house is still making minimum wage. Revenue sharing is essentially subsidizing what they would have made in tips. Based on my calculations, they should be making the same amount of money, if not more. To me, what was exciting about this is it gave the opportunity to stabilize their income. So people who are working off shifts or a slow night won’t see as dramatic a pull on their paycheck as they might have previously.

Menu pricing increased overall by 22 percent on average. It wasn’t like a flat 22 percent across the board. I ran a product mix and tried to figure out, based on value perception, which items to increase and which to leave the same.

Alcohol prices didn’t go up as much. Food prices took the bigger brunt. Smaller items, like seasonal vegetables or fingerling potatoes, for example, went up by $1, which was less than 22 percent. But bigger items, like shrimp dishes or a short rib dish, went up by $3 or $4, which was more like a 25-percent increase.

How did you communicate the switch to no tipping?

For consumers, we have a note that we drop with every menu. We have signs on the door. We have a comment card that’s dropped with the check with a huge logo that says "gratuity free."

Once they start to understand what’s wrong with the system, the inequality between the front and back of house, and the repercussions of the minimum wage hike, guests are incredibly supportive.

How do servers feel about it?

The revenue-share component was incredibly important to the success of this. That incentive to drive sales and be fully invested in the restaurant is a really important component because it’s how the industry has worked for such a long time.

My employees will need a few more paychecks to make sure things aren’t changing dramatically for them. But the stability aspect is something that’s incredibly appealing. Now they feel like they’re on a fair playing field.