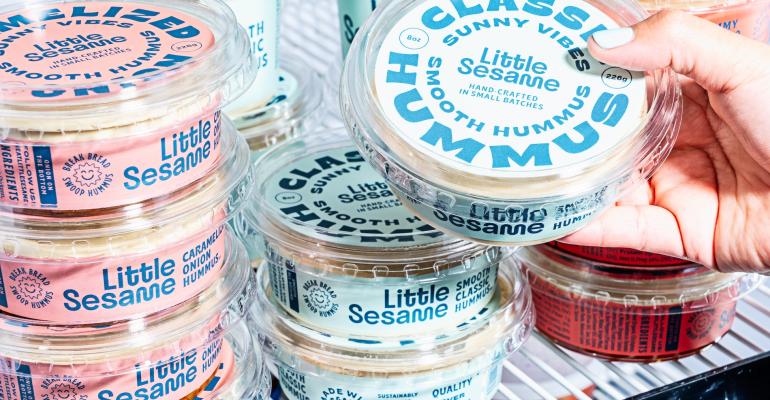 As national restaurant chains lean into CPG, Little Sesame is pivoting from being ‘mostly a fast-casual restaurant’ to ‘mostly a packaged hummus company’

When Mediterranean fast-casual restaurant Little Sesame first opened its doors in Washington, D.C. in 2018, one key element was at the start and heart of their business: homemade hummus. In fact, when cofounders Nick Wiseman and Ronen Tenne began working together, they conceptualized the brand’s signature freshly spun hummus before the restaurant concept itself.

Although over the next couple of years, Little Sesame would become known as a lunch-focused restaurant with a menu of hummus bowls and pita sandwiches, the pandemic presented a unique opportunity for the restaurant to lean more into retail by selling pints of hummus during the lockdowns in 2020. Since then, Little Sesame has created a shelf-stable version of its product, shifted the focus to CPG products and they haven’t looked back since.

“When we got into fast-casual, it opened up the potential to serve more folks but was still a narrow band of reach,” Wiseman said. “The most reach we could get was through grocery stores. A successful product will be in thousands of groceries stores and creating visibility to hundreds of thousands of people. […] Our whole hummus brand is built on the regenerative supply chain and we view every pint of hummus sold as an investment in [Casey Bailey’s farm, where the chickpeas are exclusively grown]. We want to move the paradigm for the way food is made in this country.”

While Little Sesame’s packaged goods goals are strongly tied to their environmental values and desire to reach more people, they are certainly not alone in blurring the lines between CPG and the restaurant industry. Beginning with chains like White Castle, Starbucks, and TGI Friday’s, retail products have almost always been a part of foodservice. But the pandemic influenced more restaurant operators to lean even more into other sources of revenue to offset losses from COVID-related closures.

That trend has continued even in a post-pandemic world, as brands like Panera Bread introduced more, refreshed CPG products this fall, and even virtual brand companies like Nextbite are announcing CPG partnerships, like their Kellogg’s MorningStar Farms Incogmeato partnership, which was first announced this spring.

Seeking retail as a supplemental form of revenue is the more typical CPG avenue for restaurants, rather than Little Sesame, which has pivoted most of its focus to the grocery store aisle. But with Little Sesame, the hummus was always the focal point of the restaurants. Now, the brand’s hummus products (available in four flavors) can be found in Whole Foods, and they even have distribution partnerships with Sweetgreen restaurants and Baldor Specialty Foods. Right now, the ratio of the Little Sesame retail and restaurant business is about 50/50, but moving forward, it will be about three to one wholesale/grocery vs. restaurant sales in 2023.

“The restaurant landscape remains so uncertain, […] that we just decided that focusing on getting our product out there where people wanted to purchase it anyway was a smart move,” Wiseman said. “Regardless of the big seismic shifts in what was happening with people’s lives, one thing that wasn’t going to change is people will still need to buy food from the grocery store. […] It doesn’t mean we won’t ever do more restaurants. We’ve built up such a strong following in D.C. that we could foresee replicating this in other markets, but it just won’t be our engine of growth.”

Though of course, switching your focus to retail comes with its own set of challenges. Wiseman said that since he and his team were restaurant people, it became difficult to figure out how to transfer that hospitality to a packaged product. With retail, it becomes all about quality (of course), but also using package design and social media marketing to tell your story and to maintain that sense of community whether people experience Little Sesame from a container or in the restaurant.

As the retail business grew, Little Sesame also has to build a new production facility to keep up with demand, especially going from producing 2,000 pounds of hummus a week to 20,000 pounds next year. With all of these changes in mind, Wiseman understands that this direction might not be the right path for all — or even many — foodservice companies.

“You're still manufacturing and selling food, but it's a very different business,” he said. “It’s not like opening a restaurant. Retail is a difficult world to enter, especially as you reach real scale. […] I think the restaurant world know s that right now it’s important to get revenue beyond the four walls of a restaurant. But this is a whole new business and we’re one of the restaurants with the capacity to make the change.”