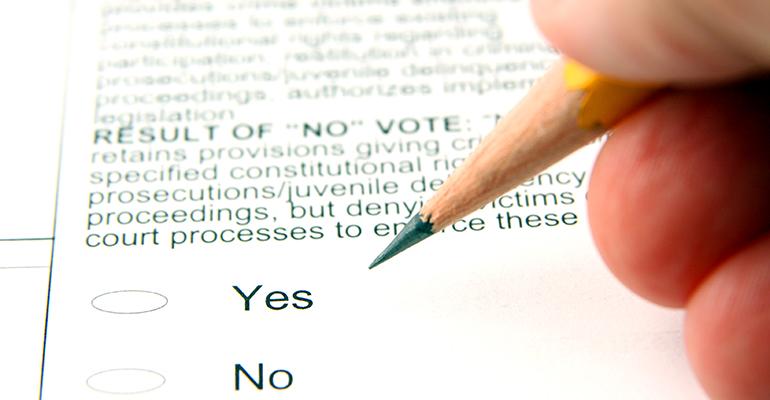 Svanblar / iStock / Getty Images Plus
Minimum wage, marijuana legalization, gig-worker benefits and more are on the ballots across the country in 2020.
Operations

What’s on ballots across the country this election season affecting restaurants?

The 2020 election is in full swing, and the restaurant industry is waiting to see what its future will look like. With the Senate adjourning before passing any coronavirus relief package, it’s time to turn to state and local elections to see what’s at stake for the industry further down the ballot.

We already covered the big-ticket views (for our full Presidential coverage click here), but there are dozens of ballot initiatives in 38 states that could pass and affect operators in states from Florida to California.

Here are the ballot initiatives across the country that could be passed on Election Day:

Proposition 22, or App-Based Drivers as Contractors and Labor Policies Initiative (2020):

Uber, Lyft, and Doordash are sponsoring a ballot initiative that would define app-based drivers as independent contractors and not employees, as well as enact several labor and wage policies, meaning workers won’t need to be paid minimum wage in California. Lobbying efforts from the three companies totaled over $200 million, one of the most expensive lobbying efforts in a state.

While states and cities across the country have attempted to regulate the third-party delivery industry, this is the first time voters will have the chance.

This impacts drivers who work with Uber Eats as well.

The initiative comes in response to a 2019 California law that made it mandatory for these apps to classify their workers as employees and provide health care, minimum wage, paid sick leave and unemployment insurance.

If the measure passes, it will establish a state-run paid family- and medical-leave program and allow Coloradans up to 12 weeks of paid leave funded by an additional 0.54% tax on paychecks that goes into a statewide pool of money.

In addition to these measures, several states across the country have marijuana legalization on the ballot.

When California legalized marijuana for recreational use in 2016, there was a boom in restaurants featuring the ingredient in menu items, and restaurants where smoking outside was legal.

If these initiatives pass, we may see a rise in cannabis restaurants across the country.

Could this be another restaurant trend? We will only know if these initiatives pass on Nov. 3.