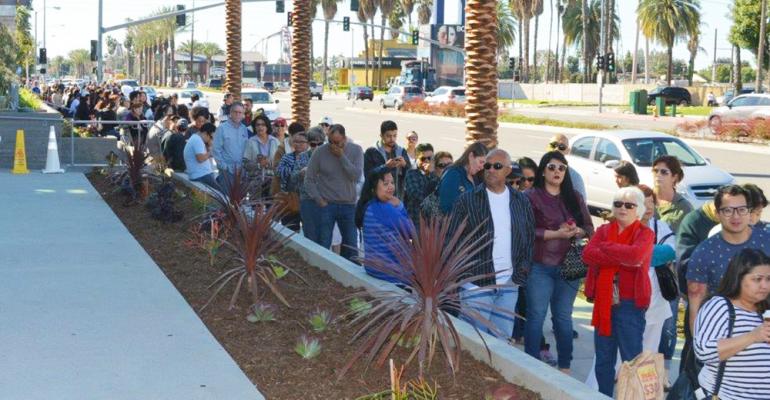 Porto’s Bakery Café is entrenched in the Los Angeles community

When Rosa and Raul Porto left Cuba in the 1960s and eventually landed in Los Angeles, they didn’t speak the language and had no idea how they would get by.

Rosa Porto began baking cakes to sell to friends and neighbors. Now 40 years later, that business has grown into the four-unit Porto’s Bakery & Café, known as much for Cubano sandwiches, potato balls and cheese rolls as for cakes and pastries. But, perhaps more than anything else, Porto’s is known for its tremendously loyal customer base, which is the envy of restaurant operators across the city. In 40 years of business, the café chain has had only one year of sales declines. That was in 1986, when the family had just one location and another bakery opened nearby. Porto’s quickly recovered by the following year and has continued its steady pace of growth since, though the family declined to give specific sales numbers.

When Porto’s opened its most recent location earlier this year in the Los Angeles neighborhood of Buena Park, lines snaked around the block.

Porto’s has never advertised. But, because the chain is such an L.A. icon, the brand has been written into story lines of TV shows and movies, including “Six Feet Under” and the recently released remake of the series “One Day at a Time.”

Raul Porto Jr., the son of Rosa and Raul Porto Sr. and one of their three children who run the company now, estimates the four existing Porto’s see about 4,000 customers per day per store.

A fifth location is scheduled to open in West Covina, Calif., just east of downtown Los Angeles, with a sixth to follow in 2019, probably in Northridge, Calif.

Porto’s is in such demand, the family is also working on developing frozen dishes that can be shipped across the country from the bakery and café commissary.

Raul Porto Jr. credits a combination of factors that have helped the café chain win the devotion of guests over the years.

“I wish I could tell you we had this all planned and we knew we’d be here 40 years ago, but it kind of happened organically,” he said.

And Porto’s cakes and dishes designed to serve crowds have a way of becoming part of family rituals, he said.

“As a young child, your fondest memories are those of your first birthdays, when you’re getting that cake and picking it up,” he said. Birthday cakes become graduation cakes, then wedding, christening and quinceañera cakes. Porto’s founders Raul Porto Sr. (second from left) and Rosa Porto (second from right) pose with their children, including Paul Porto Jr. (center back), and grandchildren — and some of their bakery’s famous fare.

“People start to think of you as part of the celebration,” he said. “It has to do with connecting with a customer in a special way, where they’re not just a transaction, but something special.”

Another key is the fact that Porto’s has kept pricing relatively low.

The popular potato balls, for example, which are fried mashed potato balls stuffed with seasoned ground beef, are only 98 cents each. A large chicken empanada pie that can feed 12 to 20 is $14.50. A ropa vieja sandwich is $7.25.

Because Porto’s does such large volumes, the chain has been able to maximize
margins by purchasing efficiently. The family also buys the properties it moves into, rather than leasing, to better control real estate costs.

In fact, Porto’s biggest challenge has been maintaining customer service despite the long lines at the restaurants, which are often described as controlled chaos.

Raul Porto Jr. said the siblings are exploring the use of technology, including mobile ordering or the use of self-service kiosks to speed throughput.But the family is reluctant to lose the personal touch that has defined Porto’s over the years, he said.

“They’re both still very aware and give their opinions and feedback,” he said. “My mom will complain if we change any of her recipes.”

Porto’s Bakery & Café At a Glance