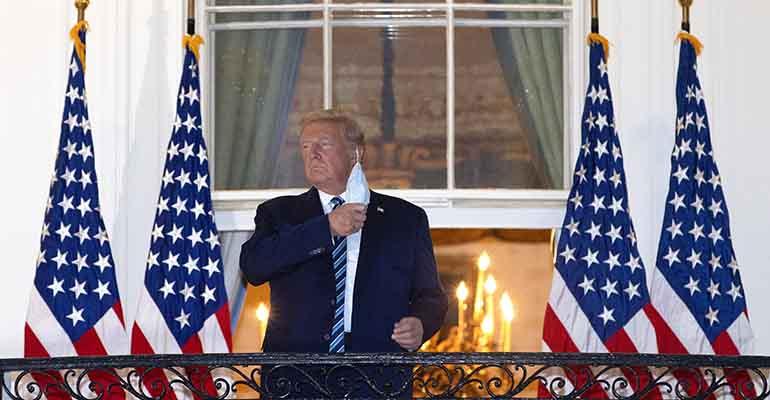 Win McNamee / Staff / Getty Images News
Trump sent multiple tweets Tuesday night calling for a half on relief bill negotiations until after the election, a boost to PPP funding and funds for the airline industry.
Operations

President Donald Trump late Tuesday urged Congress to approve $135 billion to bolster the Paycheck Protection Program, but the tweet came just hours after he shut down negotiations over proposed stimulus plans that would have reinvigorated the loan program.

Earlier Tuesday, Trump tweeted that he had instructed his representatives to stop negotiating with Democrats on a COVID-19 relief package that would have included funding specifically to help restaurants, as well as upping funding for the PPP program. Trump rejected a $2.2 trillion Democrat-backed bill passed by the House last week, saying he would pass “a major stimulus bill” after the election, if he wins. The White House has supported a $1.6 trillion relief bill.

The president also tweeted that he would support a stand-alone bill for a second round of $1,200 stimulus checks to taxpayers, and he also reportedly favors a bail out of the airline industry.

House Speaker Nancy Pelosi in a statement Tuesday said, “Once again, President Trump showed his true colors: putting himself first at the expense of the country, with the full complicity of the GOP Members of Congress.”

Pelosi pointed to warnings from Fed Chairman Jerome Powell on Tuesday, who said, “Too little [policy] support would lead to a weak recovery, creating unnecessary hardship for households and business. Over time, household insolvencies and business bankruptcies would rise, harming the productive capacity of the economy and holding back wage growth. By contrast, the risks of overdoing it seem, for now, to be smaller. Even if policy actions ultimately prove to be greater than needed, they will not go to waste.”

In his speech, Powell pointed to the PPP program specifically as one example of aid that has forestalled an expected wave of bankruptcies and lessened permanent layoffs.

“The recovery will be stronger and move faster if monetary policy and fiscal policy continue to work side by side to provide support to the economy until it is clearly out of the woods,” Powell said.

Responding to the “no deal” position, the Independent Restaurant Coalition on Tuesday said in a statement that if Congress and the President walk away from negotiations that “even more of our neighborhood restaurants will go out of business.

“Restaurant employment decreased in nine states in the last available report, and this industry remains the largest contributor to national unemployment. We cannot afford five or six more weeks of decreased revenue, more debt and uncertainty about colder weather,” the IRC said.

With the immediate future of the relief bill unclear, industry lobbyists are pushing for piecemeal efforts, including more funding and tweaks to the PPP  program, allowing for expenses paid with PPP funding to be tax deductible, and expanding the Employee Retention Tax Credit to help restaurants get support after a PPP loan has run out.

The NRA also sees hope for the $400 billion Reviving the Economy Sustainably Towards a Recover in Twenty-twenty, or RESTART, Act, which would extend the PPP program for small businesses.