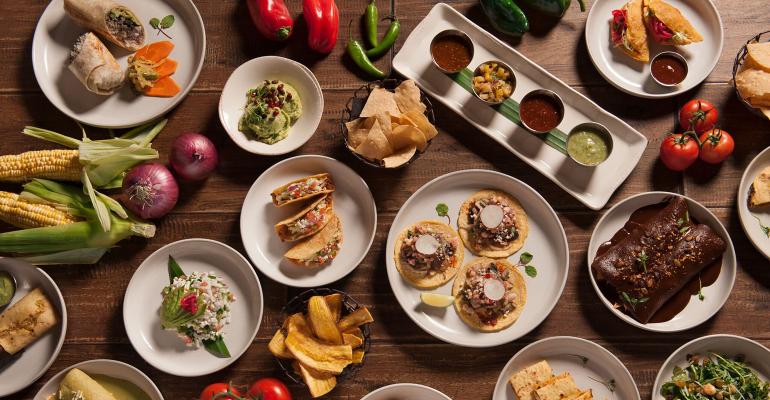 The move toward virtual restaurants continued last week with the launch of Modern Organic Mexican in Los Angeles, offering a full menu for delivery only.

Modern Organic Mexican, or MOM, was launched by The Madera Group, based in Los Angeles, which is also parent to the six-unit Tocaya Organica concept and one higher-end restaurant called Toca Madera. The group plans to expand those brick-and-mortar concepts throughout the U.S. and abroad, the company said.

The delivery-only service, meanwhile, will be available for dinner hours through Postmates and UberEats in LA.

“It’s no secret: Technology is driving the way we all live and, increasingly, the way we eat,” said Tosh Berman, co-founder and CEO of The Madera Group, in a statement. “Delivery services like Postmates and UberEats have already proven to be hugely successful for our Tocaya Organica and Toca Madera concepts, and this is one of the major reasons we wanted to create MOM.”

The delivery-only menu includes what the company calls traditional homestyle Mexican cuisine, with dishes like tamales, tacos, enchiladas and burritos, made with organic ingredients. Dishes can also be made vegetarian or vegan on request.

Berman said MOM’s menu will be prepared out of a “ghost kitchen,” as well as using the group’s existing restaurant kitchens when hours of operation allow.

Some similar dishes can also be found on the fast-casual Tocaya Organica and full-service Toca Madera menus, but MOM will be positioned at a price point between the two sister brands, Berman said.

“MOM’s price point was created as the in-between of our two existing concepts,” he said. “We wanted to offer a lower price point than our full-service restaurant Toca Madera, which is more premium — so a harder sell for delivery — but yet higher than our fresh-casual concept Tocaya Organica, which averages around $17.50 a person.”

MOM’s menu has also been “value engineered,” he said, and will travel well for delivery. Two tamales, for example, are priced at $7.50, and a signature burrito is $14, while enchiladas are $16.

While it’s too soon to say whether MOM will expand to other markets, Berman said the group has aggressive growth plans for Tocaya Organica, with 37 restaurants expected by the end of 2019. The group is also opening Toca Madera in Scottsdale, Ariz., and the first international location in Dubai in 2018, with a third to be determined scheduled to open in 2019.

The company plans to franchise the brands outside the U.S., including in Canada, Europe and more in the Middle East, Berman said.

A growing number of restaurant operators are shifting toward delivery-only concepts, either out of their existing restaurant kitchens or commissary spaces.

DoorDash is testing the creation of commissaries for virtual restaurants, and UberEats is tapping its market data to help restaurants create virtual concepts that meet a need.

New York’s Altamarea Group has Pasta On Demand. Lettuce Entertain You Enterprises in Chicago has several delivery-only concepts, including ASAP Poke and a virtual location of the Wow Bao concept in Los Angeles. And Red Robin Gourmet Burgers is testing a delivery-only location in Chicago.

CORRECTION Nov. 28, 2017: This story has been updated to correct plans for growth for Toca Madera. Three locations are expected to open by 2019.