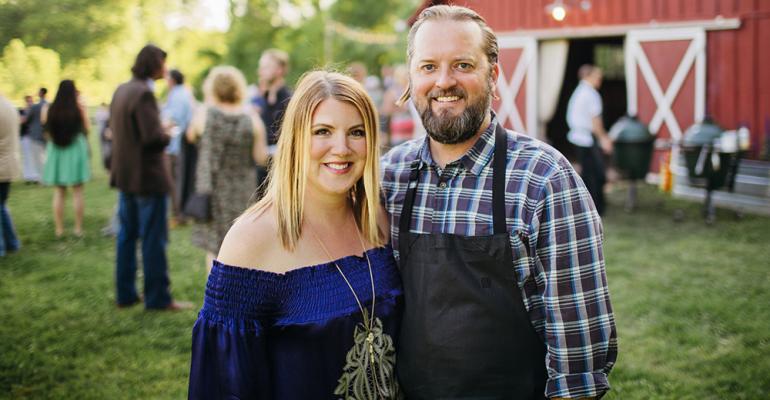 The owners of Easy Bistro & Bar in Chattanooga, Tenn., are used to feeding a crowd. But four times a year, the couple takes the crowd to dine high on a mountain, for example, or beside a picturesque restored barn under a canopy of oak trees donned in twinkling lights.

What started as Erik and Amanda Niel’s desire to shine more light on Chattanooga’s food scene, has blossomed into a sold-out quarterly event that gathers guest chefs, local culinary talent and 150 self-proclaimed foodies.

The Niels started Scenic City Supper Club in 2015. “We began the suppers because we wanted to highlight local artisans and farmers in the Chattanooga area,” said Amanda Niel. The Homemade Southern Supper with Daniel Lindley at the Everlee Farm.

The Niels spearheaded a meeting among local chefs to get the ball rolling where all agreed that if the city did well, they would do well. “We wanted to remove competition from the equation,” said Amanda Niel.

In the years since that first supper, the Niels have helped to cultivate camaraderie within the local restaurant community, built lasting relationships with local and visiting chefs, and forged new connections with guests in their own restaurants.

“We have five different chefs, artisans or bartenders,” Amanda Niel explained. “The guest chef creating the main course is usually from an outlying city like Atlanta, Birmingham or Nashville, and everyone else is local.”

In January, for example, the dinner was held in the recently renovated Turnbull Building, which is on the National Register of Historic Places, and included Rob McDaniel of the restaurant SpringHouse in Alexander City, Ala., as guest chef.

Amanda Niel designs each event to stand out from the others, basing décor choices on the type of food that will be served, the location and the season.

“Lighting, textiles and dishware are all based on what we have available to us at the time, but I try to match the event,” she said. “If it’s outdoors, I want something light and airy, and if it takes place in the winter, I might use something heavier for dishware, colors, etc.” Dinner Under The Dome with Matt Bolus at the Chattanooga Choo Choo Hotel.

Since renting furniture can become expensive, the Niels asked a local woodworker to build their tables, which they bring to every event. Niel then rents chairs depending on what type of event it is. “I like to match the seating to the location,” said Amanda Niel. “Sometimes I might want wood or metal, other times, resin.”

When the Niels are choosing locations, they take into consideration the beauty of the city as well as logistical concerns.

In photos, beautifully adorned tables atop green mountains may appear to come together seamlessly, but Amanda Niel said logistics become very important when you don’t have access to electricity or a kitchen. “There has to be a place for a generator or a fire,” she said.

Safety also needs to be addressed when hosting an outdoor supper. “We held an event at Lula Lake, which is a private land trust on Lookout Mountain,” said Amanda Niel. “It’s beautiful, with a huge natural lake and two waterfalls; but, it’s also very rocky. Our attorney had to create a waiver that guests signed before walking down to where the tables were.”

And what’s a culinary event without cocktails? “There are some beautiful places that I’d love to highlight, but we can’t host events in locations where alcohol can’t be served,” said Amanda Niel. “For this reason, our events all need to be held on private land or in event spaces.”

Location and logistics plays into the fluctuating ticket prices as well, with the lowest being $65 and the highest being $195, according to Amanda Niel. “If we need to bring in generators, the ticket price is going to go up,” she said.

The suppers began with a group of 50 guests and now include up to 150.

Depending on location and menu offerings, business costs can vary for the events that require months of planning and four days of on-site set up. On average, Amanda Niel said that about $15,000 is spent on planning, organizing and pulling off an event. Party in the Passageways with Adam Evans at Urban Chandelier and Garden Grass Passageways.

When collaborating with private land owners on a location, Amanda Niel said ticket proceeds are split with the owners. Other locations, however, such as new event venues, are sometimes donated if the owners are interested in coming on board as a sponsor or partner.

The chefs who participate in the events donate their time, but the Niels cover all food product costs and provide access to event photos for individual marketing.

A partnership deal with local media company Nooga.com in the early stages of development has saved the Niels valuable marketing dollars over the years. “We wanted a local media partner that would attend the dinners and write about them, so we reached out to Nooga.com who became our sponsor and partner,” said Amanda Niel.

The events are not a huge money maker, but Amanda Niel said they break even.

“We’re really doing it for the love of the game,” she said. “We’re proud of our city and our local restaurant scene, and, so far, it’s been worth all the effort and the hours. I feel like we’ve made a lot of progress toward bringing more attention to Chattanooga.”