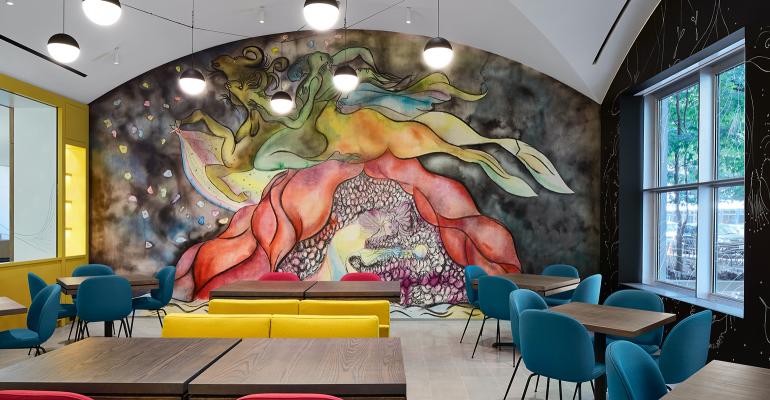 Kendall McCaugherty
Named for a famed artist, Marisol's mural is a focal point, reflecting the restaurant's connection with its location, the Museum of Contemporary Art in Chicago.
Operations

Art has always been an element in restaurant design, but more recently murals, both inside and outside, have become a key focal point and brand symbol for venues of all types.

Today’s murals are big, bold and edgy. They can set the tone for the restaurant’s design as a whole and sometimes serve as a social media identifier, appearing in the background of selfies or food shots.

Art is very much the point at the restaurant Marisol, slated to open in September at the Museum of Contemporary Art in Chicago.

The venue is named for the French/Venezuelan artist Marisol, known for “Six Women,” the first work in the museum’s contemporary art collection. For the centerpiece mural, British artist Chris Ofili focused on the relationship between food, art and design, said MCA director Madeleine Grynsztejn.

“His extraordinary mural is the focal point, with delicately sinuous designs running from walls to windows that together have the desired effect of enveloping our diners in a fantastic setting that brings his work — and our chef Jason Hammel’s cuisine — to life,” she said. At the ice cream shop Small Batch in Los Angeles, local artist Bumble Bee designed a whimsical mural that captures the happiness of a kid with a cone.

The shop is owned by Company for Dinner Hospitality Group, operated by Brooke Williamson and husband and co-chef Nick Roberts, who also have the L.A.-area restaurants Hudson House, The Tripel, Playa Provisions, TripliKit, and Da Kikokiko.

Bumble Bee’s art also adorns the exterior of Hudson House, a gastropub in nearby Redondo Beach. The snorkeler is inspired by Williamson and Roberts’ son Hudson.

At the new seafood concept Tintorera in Los Angeles, opened by chef Maycoll Calderón and partner Walter Meyenberg in September, an aquatic mural ties the restaurant’s name to the romantic outdoor patio.

Tintorera is named for a 1970s “Jaws”-like Mexican horror film — tintorera is the Spanish word for a kind of shark. The mural by Mexico City artist Seher One, bears the restaurant team’s catch phrase “It’s a Mexican thing.”

In Dallas, the restaurant Lark on the Park has a rotating series of chalkboard murals every four months.

Lark on the Park Lark on the Park rotates its chalkboard murals every four months.

Artists submit work through a website to win a spot, and Bearden also recruits from the local community. The artists get a $1,000 gift card and their bio printed on the back of the menu.

On the day of the changeover, the restaurant has to remove about one-third of the seating to make room for scaffolding. But the event is always fully booked ahead, said Bearden. “It has its own following.”