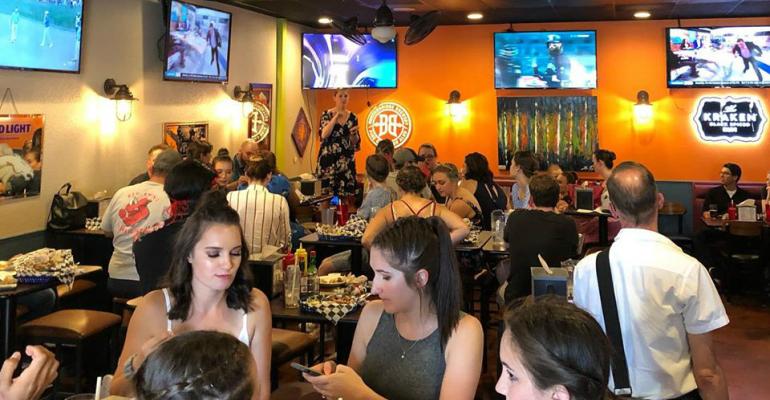 The Paycheck Protection Program: Feedback from the front lines

As lawmakers battle over an attempt to inject another $250 billion to the Paycheck Protection Program launched last week, restaurant operators across the country are struggling with the loan application process.

Business owners say they are facing dead ends for a variety of reasons. Some are being turned away for not having a prior relationship with the bank. Others are scrambling to understand the required paperwork, and still more say they have gotten no feedback, leaving them wondering whether their application is being processed.

The program has caused so much frustration that cities like Los Angeles have launched help centers to assist business operators with applications:

Here are some key takeaways from operators — and an accountant — who have gone through the application process:

Related: Where restaurant workers can get financial help during the coronavirus crisis

Banks were not prepared for this

On April 2, the U.S. Small Business Administration published the interim regulations for the federal relief package meant to save businesses during the coronavirus pandemic. Just one day later, applications for the Paycheck Protection Program loans opened up to the general public.

“The legislation came down fast and furious,” said accountant Stephanie O’Rourk, partner at the firm CohnReznick. “There has been confusion with defining parameters of what the actual loan was and banks were unable to position themselves in an efficiently expedient manner. They knew the volume [of applications] would be great, and the vast majority of banks are not set up for that volume.”

O’Rourk said when PPP applications were released on April 3, customers were coming to their banks for clarification on how to apply — which year of payroll costs they should include, for example, and what exclusions they needed to be aware of. And banks were telling customers in return, “It’s your responsibility, not ours.”

Every bank has a different application and unique requirements

“I downloaded the PPP form from the SBA website, filled it out and brought it to my bank [on April 3] and they were like, ‘No, you have to fill out our form, we won’t take that one,’” said Pat McGrew, a Colorado-based owner of three restaurants, Miles Sports Club, Sideways Sports Lounge, and Luke’s Steakhouse. “The banks seem to have the attitude that the money was theirs and that they will decide who to give it to, no matter what the regulations are.”

Not only are the application forms and requirements different for each bank, but they have shifted after the program launch. Operators said, for example, that the accepted method for payroll calculation changed over the course of a week to include taxes.

“We had already submitted our application on Friday, so our application was no longer accurate,” said Naomi Pomeroy, chef and owner of Beast, a fine-dining restaurant in Portland, Ore. “You can amend your application, so we did that, but we never heard anything after that.”

There are some fine print requirements for businesses applying for loans

The interim regulations that the SBA published on April 2 say eligible businesses must have 500 or fewer employees per location that was in operation on February 15, 2020.

The only guidelines that would make a borrower not eligible is that the business owner must not be engaged in any criminal activity, incarcerated or on probation/parole, or have defaulted on a loan obtained by the SBA in the past seven years.

But restaurant owners say they are being denied or are unable to apply for loans for other reasons. One café owner in Hudson, Mass., who did not want to be identified, for example, was unable to even apply for a loan because he had a personal bankruptcy.

“The first question on the application asked if the business owner is involved in any bankruptcy and how could I get around that?” he said. “My attorney said I could try dismissing my case but then the creditors will be after me eventually. […] I can’t tell you how frustrated this makes me. This is not my team’s fault. I’m likely going to have to close my business permanently.”

Another obstacle is that the PPP loan has to be taken out with an SBA-accredited lender. McGrew was unable to use her primary bank because it’s a credit union and does not work with the SBA, so she had to scramble to find a secondary bank.

“This bank told me they would process my application, but I’d have to come in person to prevent fraud,” she said. “I’m over 60 and I have immunocompromised people in my house. I don’t want to risk that. And they told me, ‘Well, find another bank then.’”

Some banks won’t process the applications of first-time customers

In part because of the onslaught of applications, some banks have indicated they will prioritize borrowers with whom they already have a relationship, which could put well-established restaurants or even small or mid-sized chains at a distinct advantage.

“This fund is on a first-come, first-serve basis,” O’Rourk said. “From a resources perspective, banks want to make sure their customers are being taken care of first.”

Larger companies might have an advantage over smaller businesses

Although the PPP loans are designed to help small businesses, O’Rourk said that banks’ largest customers are never going to be the mom-and-pop restaurant on the corner.

“I know for a fact that some of my clients that are restaurant groups with more than 500 employees have already been approved for loans,” O’Rourk said. “They have leverage in the fact that they already have business relationships with big banks like Wells Fargo and Bank of America.”

She suggested that there should be a separate application process for smaller businesses that may have gotten shut out by this loophole, like those with less than 100 employees per location instead of the parameters that stipulate less than 500. That way, restaurants that don’t have strong ties to big banks can stand a chance.

“I don’t have that kind of relationship with my bank, I am just a run-of-the-mill client,” McGrew said. “We’re not big fish to these banks; we’re just an annoyance.”

In addition to the other challenges, many businesses were shut out as bank websites overloaded. But for those who were able to submit an application, some said they never received any reply.

“My bank opened applications Friday and by the end of the day, they were not able to accept any more,” Pomeroy said. “We’re lucky we were able to get ours in. But we did not get an application number, confirmation email or a representative who would handle our application. My local bank is not managing this stuff; I’m talking to someone in a different city.”

Initially, the proposed PPP guidelines indicated the interest rate for loans that would not be forgiven would be 0.5% to be paid back over 10 years. Under the final rule, however, the interest rate was upped to 1% to be repaid in two years, though payments can be deferred for six months.

For the loan to be forgiven, at least 75% must be dedicated to payroll, and workers must be retained or rehired by June 30. For many small businesses that can’t even see the light at the end of the tunnel with this global health crisis, paying off a loan within two years seems like an insurmountable feat, Pomeroy said.

“Let’s say we manage to open back up in August, no one will want to be around other people,” Pomeroy said. “When the virus is under control, we’re still looking at massive paralysis of our industry and people need to think if taking on more loans is even a good idea.”

Response for EIDLs is no better

The PPP loans are not the only relief funds small businesses are trying to get their hands on. Restaurant owners are also applying for Economic Injury Disaster Loans, known as EIDL, which were supposed to provide quickly processed grants of $10,000 while they waited for their loans to be approved. But restaurant owners say they are not faring any better with these support efforts.

“I jumped online early to fill out the application for the EIDL and it said that it would deposit the $10,000 into my bank account ‘shortly,’” McGrew said. “I don’t know what ‘shortly’ means but I’ve been watching my bank account for two weeks and so far, have received nothing.”