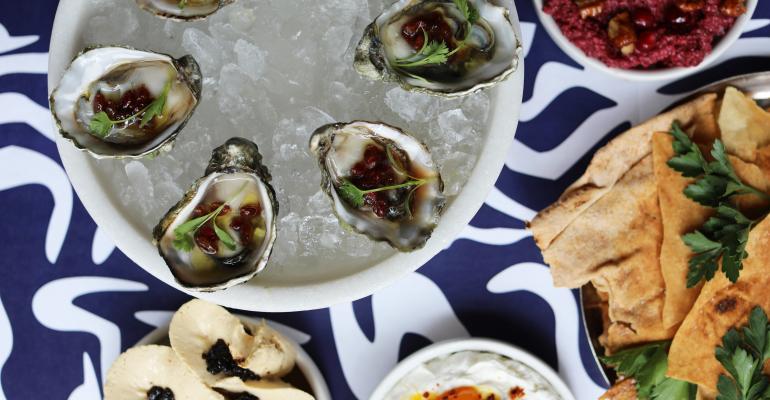 New Mediterranean concepts have opened at the Clayton Hotel

Kini’s offers Greek seafood with entrées running from $38 to $55. Cretans is a Mediterranean wine bar with tapas and a pour-over Martini program that garners an average per-person check of around $75. Chez Roc is a nighttime Mediterranean piano bar with light bites paired with craft and classic cocktails for $12 to $17 each.

The three new Denver spots are all located on the street level of the Clayton Hotel, in Denver’s tony Cherry Creek North neighborhood, and all had the same design company, AvroKO. But each has its own distinct profile. One might not even know the places are owned by the same company.

Denver wasn’t sought out as Quality Branded’s second market according to CEO and founder Michael Stillman, whose father Alan Stillman founded Smith & Wollensky as well as TGI Fridays. It just worked out that way.

“We randomly found Denver as one of the first places to open up in, and it's an exciting market and we love being there," he said.

Its first entry into the Mile High City came in March of 2017, with a swanky sister branch of Quality Italian inside the Halcyon Hotel, also in Cherry Creek North. It turned out the upscale area was literately hungry for dining in a red-hued, members-club-like setting on $46 New York strip steaks with truffle butter, $19 fried calamari casino, $38 spicy lobster rigatoni, and chicken parm pizza which runs $70 and feeds at least two people.

Its three Clayton Hotel openings were completed at the end of 2022. That hotel also has a members-only club, but Stillman’s company isn’t involved with that, or with in-room dining or banquets.

"We have done contemporary American, Italian, steak ... and we are excited to engage in other things," said Stillman over the phone. "The Eastern Mediterranean restaurant [featuring chef Madeline Sperling] we opened in NYC, Zou Zou’s, has been going really well there."

"We are the biggest group in Cherry Creek right now, which is exciting," Stillman added. "We went from feeling like an interloper, to feeling out the market, and four years later, we felt we had a great team that understood Denver and loved how Denver continues to grow."

But Stillman added that he is eyeing other markets, too.

"We are open [to other markets], there's a lot of inserting opportunity out there and we were able to lock up some great opportunities during COVID," said Stillman, not expanding on just what those opportunities are just yet. He did add that the group is looking at Texas, Chicago, Scottsdale in Arizona, Las Vegas, Los Angeles, Nashville, Atlanta and other "big players."

But at the moment Quality Branded is working on three new projects in its home market of New York City. Those include a just-finished 19-seat event space next door to Don Angie; a new as-yet-unnamed Italian restaurant and concept inside The Shops at Columbus Circle complex, and a third, to-be-determined eatery.