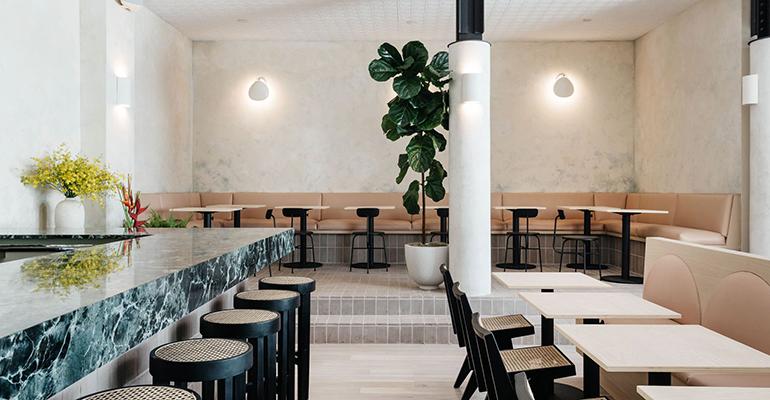 Restaurants like Bluestone Lane installed Heathe lighting as a way to sanitize during the COVID pandemic.
Operations

New cleaning technologies are pitched as game changers for restaurants, but do they work?

From UVC lights that inactivate COVID particles on contact to a smart robot cleanser, restaurants are investing big time in new sanitization technologies to put customers at ease

After the arrival of the pandemic, it became clear that standard restaurant sanitizing and cleaning procedures — like donning gloves to wipe down counters or mopping with commercial grade cleansers after hours — would not cut it.

As dining rooms began to reopen, the use of and innovation around sanitization technology — particularly sanitizing UVC lights that deactivate virus particles — became a gamechanger, at least for restaurant operators that can afford the investment.

When the pandemic first hit, The Blind Horse, a restaurant and winery in Kohler, Wis. had to shut down for 45 days in accordance with state lockdowns. But as soon as they were able to reopen their doors, they knew they had to invest in sanitization technology to make their operations work, Blind Horse general manager and winemaker Tom Nye said.

The first thing they did, he said, was use a “Shock and Shield” deep-cleaning treatment: a hospital-grade UV light that “shocks” or blasts a room with microbial-killing UV light. Then a non-toxic coating is applied that forms a layer of “nano spikes” that the company says protects surfaces for up to 90 days.

But this process can’t be done while humans are in the room, and it doesn’t kill contaminants in the air. So Nye found far-UVC light technology that was safe for longer-term human exposure.

“This far-UVC technology is more effective in killing virus particles and pathogens so we thought, ‘why wasn’t it applied earlier?’ but there wasn’t a real need until COVID came along,” Nye said.

In October, The Blind Horse began partnering with Healthe Lighting to install their far-UVC lighting product, “Healthe Space,” which includes lighting fixtures that “passively and continuously” sanitize rooms and inactivate harmful microbes, while simultaneously being safe for human exposure. 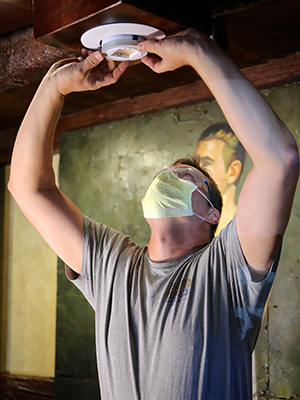 “We realized that you need a blended approach and need to employ multiple technologies because no single one can do everything,” Nye said. “Far-UVC lighting is just one answer. We also sanitize our space with ozone gas every night in case anything is missed during the day.  […] We’ve gone the extra mile to do the best we can to make everyone feel safe.”

Nye said that in addition to implementing the 90-day “Shock and Shield” sanitation and installing the far-UVC lighting, they have also installed two extra-large ceiling fans from the company Big Ass Fans in certain parts of their property. The fans suck air from the room like a vacuum up into UVC lights pointed at the ceiling. This system uses UVC technology that is not safe for human exposure (which is why the lights are pointed up at the ceiling) and is 99.99% effective at inactivating microbes and other particles, according to the manufacturer.

Despite the costly investment, Nye predicts these lights will be commonplace equipment in the next five years.

“Best-case scenario, we’re out of this mess by next June and if you look at the history of these viruses, we’ve had multiple scares over the past 15 years,” he said. “This investment was for our employees and communities. Even when the pandemic is over, we’re still going to keep the lights in place for flus or anything else that might come along.”

The 51-unit, New York City-based café chain, Bluestone Lane also installed Healthe lighting technology in two of the stores in August and September, with plans to roll out the lights to the rest of the stores by November or December.

In addition to “Healthe Space,” Bluestone chose to also install “Healthe Air,” which uses cleansing troffer (a rectangular light fixture) technology to draw air in through a charcoal filter and exposes the air to UVA and UVC light. Both solutions have zero risk to human exposure because the UV components stay within the troffer light fixture. The lights have a shelf life of many years, while the troffer needs to be replaced every six months, Bluestone Lane CEO Nick Stone said.

“It’s a tremendously challenging time and not everyone has the financial resources to invest in this but for us we realized we had to invest in technology like this for COVID and for the future,” Stone said. 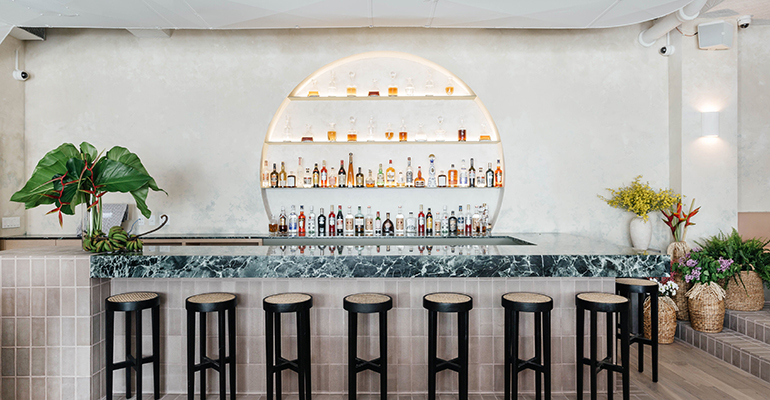 The future of air cleansing products

As UVC lights start to become more permanent fixtures in businesses, operators will begin to install lighting with UVC sanitizing capabilities already built in. Israeli startup Juganu just launched a smart circadian lighting system that acts both as a regular lighting system and as a UVC cleanser. Called J. Protect, it uses different sanitizing methods, depending on whether or not people are in the room.

"We can’t just come up with temporary solutions for when COVID is around,” CEO Eran Ben-Shmuel said. “We said, ‘let’s create the best quality lights that are comfortable and healthy We’re blending safe UVA light waves that can kill the bacteria and viruses with red and blue light waves to create a soft white light that’s comfortable for people to be in.”

The lights can inactivate bacterial and viral particles in the air and on surfaces up to 35-39 feet away and has two modes: one that is constantly on and eliminates pathogens with blended light with UVA that’s safe for humans, and also an accelerated mode that’s designed to automatically disinfect areas within two to three minutes while humans are not around. Ben-Shmuel said another handy feature in their product is a temperature gauge that can check if anyone in the immediate vicinity has an elevated temperature. 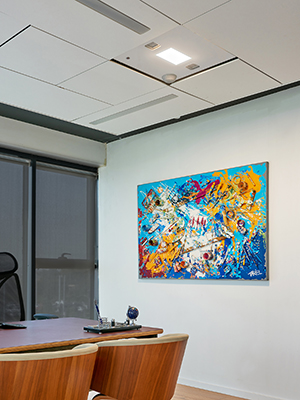 Although the Juganu product was just launched to the U.S. market (with prices varying depending on customer needs), far-UVA and UVC lighting technology seems to be the future of sanitization technology as more options are released for safety-conscious business operators.

Ava Robotics, a spinoff company of iRobot, recently combined two technologies: their autonomous robot that can move around intelligently in a commercial space and UV-C lighting technology to create a roaming disinfecting robot that can automatically cleanse spaces (both aerosol and surfaces) with UVC lights.

Much like the more “intense” settings of the stationary UVC lighting fixtures, the disinfecting robot has to be run while humans are not around. It can be scheduled to run between shifts or before a new group of customers comes in and can sense the layout of a commercial space while it’s running. After it’s done cleaning, the disinfecting robot stores data to show the end user what’s been covered and when.

The robot entered the testing stage at the greater Boston Food Bank this fall and will expand the pilot program to more clients following the test. The entire process is 99.9% effective and pricing will be dependent on whether the robot is purchased as a product or service, with the option to pay monthly for a cleaning, Ava Robotics CEO Youssef Saleh.

But Saleh said that the roaming sanitization robot is just one aspect of the sanitization procedures businesses should be taking from now on.

But how well does UVC sanitization technology actually work? According to the U.S. Food & Drug Administration “UVC radiation can only inactivate a virus if the virus is directly exposed to the radiation,” therefore the efficacy of indirect exposure (like UVC lights shining on surfaces) may be diluted by dust particles, bodily fluids etc.

The FDA also warns that low-dosage UVC lamps, which have been deemed safe for human exposure, may take a lot longer to inactivate virus particles simply because the radiation is a lower dosage.

But as futuristic sanitizers — from smart lights to disinfecting robots — become more commonplace, it can be easy to forget that “regular” cleansers are just as essential.

Water, hygiene and energy technologies and services provider EcoLab has released a new cleaner and sanitizer technology in October that’s made for the era of COVID-19-level of health and safety precautions. The EcoLab Sink and Surface cleans and sanitizes at the same time and was recently approved by the Environmental Protection Agency as 99.9% effective against SARS-COV-2.

“I’d love to tell you this was made in response to the COVID-19 outbreak but the world did not see that virus coming,” Andy Cooper, senior vice president of research, development and engineering for Ecolab’s global institutional and specialty groups said. “We have more than a thousand scientists who study the bacteria and viruses out there and solutions for making restaurants a cleaner, safer place in general. Viruses are always evolving and it’s our job to stay ahead of that and think what the hospitality industry needs will be.”

In June, they launched the EcoLab Science Certified Program to further help operators learn how to disinfect and sanitize their spaces properly and to restore customer confidence. The program provides “hospital-grade disinfectants” and a training program and auditing process for employees to learn how to reach a new level of cleanliness in the era of COVID-19.

“Any cleaning and disinfecting product needs to be applied at the right concentration, frequency and contact time to get the job done and that takes skill,” Cooper said.

Their new sanitization solution for example, should be replaced at minimum every four hours for both front and back of the house, or more frequently if you’re working with raw or ready-to-eat meals.

The pricing for the program, he said, depends on the size of the restaurant, kitchen and the individual company’s needs. He also acknowledged the high-tech options like UVC lighting and ventilation treatments, even though much of the technology “is still early” in development.

“There are lots of emerging technologies out there,” Cooper said. “Succeeding in pandemic-related aspects and food safety aspects is not a one-trick approach.”