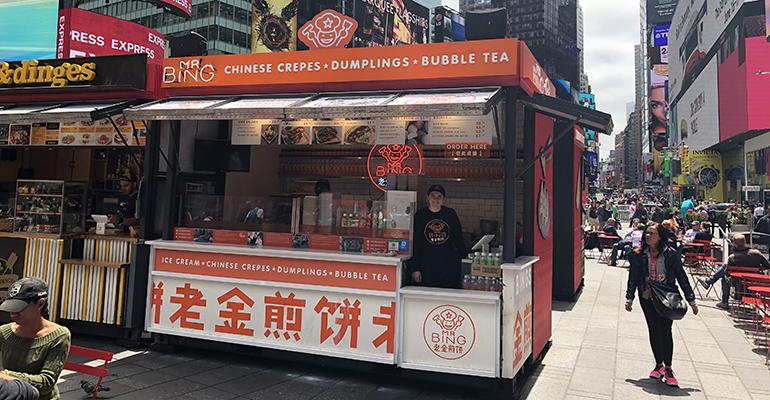 Mr. Bing, a fast-casual Asian concept in New York City specializing in the Chinese street food item bings, has announced the closure of all six units.

The chain filed for Chapter 7 bankruptcy in April but informed customers last week the restaurants would not be reopening following the coronavirus-related shutdown earlier this year.

Goldberg told Restaurant Hospitality that the restaurants were losing money in December of 2019 and January of 2020 when COVID-19 first began in Wuhan, China. Diners in the U.S. wrongly associated Asian restaurants with the virus.

He said the same “bias” closed many restaurants in Chinatowns across the country, months before the rest of the restaurant industry suffered the same fate from coronavirus-related lockdowns.

But the business wasn’t doing well before the coronavirus pandemic, the virus only sped up the process of closures for a business that was struggling already, he said.

“We just ran out of money … the places we chose didn’t work,” Goldberg said. Those locations included four inside college campus dining halls as kiosks and two locations in New York City.

Between Feb. 6 and Feb. 27, all six locations were shuttered, and all 40 staff members were let go, he said.

This wasn’t the Goldberg’s first failure with the Mr. Bing concept.

He first began the venture in Hong Kong, opening two units when he was living in China, but those eventually went bankrupt and Goldberg moved back to his native New York and opened the NYC reincarnations of Mr. Bing as a pop-up in 2015 before eventually growing to six units.

“I want to influence the food fabric of America. I lived in Asia for 13 years and I wanted to bring something back and make my mark … Americans were growing tired of General Tso’s and orange chicken, they were ready for something new,” said Goldberg.

But Goldberg wasn’t the first to realize the cravings of average Americans ad Mr. Bing joined several other brands at the time across the country highlighting Chinese street food.

Ultimately, the business model as Goldberg set it up wasn’t sustainable.

“You make money in the summer, but you lose that all in the winter,” said Goldberg which is hard to survive in New York City and what never allowed the chain to truly expand outside of the major city.

“They say one out of every 10 new businesses fails. I’ve had nine fail if you count each individual unit so I’m hoping my tenth one is the charm,” said Goldberg.

Meanwhile, Goldberg said he plans to expand his consumer-packaged goods business.  Goldberg is selling jars of his Mr. Bing chili crisp sauce on his website as well as developing products around the seasonings, including spice rubs and sauces.

CORRECTION: An earlier version of this story mischaracterized the Mr. Bing locations and the Paycheck Protection Program application process.