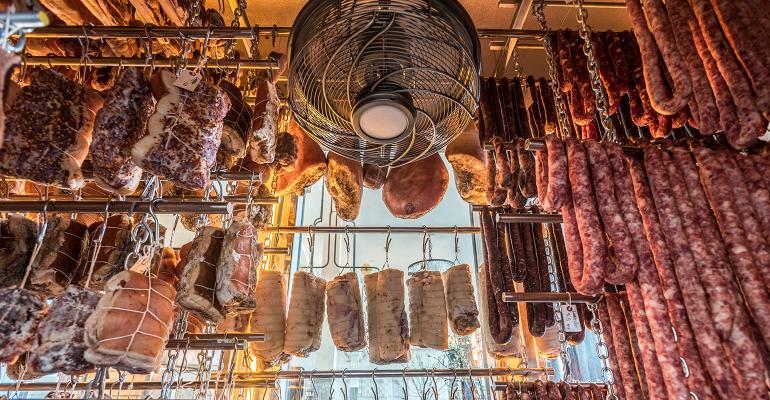 Curtis Stone is leading the call for best-in-class proteins

In the front of Curtis Stone’s Los Angeles restaurant Gwen, there is a small, European-style white-tiled butcher shop. Sitting in glass cases are rosy cuts of grass-fed lamb, pink veal osso buco, richly marbled wagyu beef, along with sausages and charcuterie made in house.

For those dining in the restaurant — one of the hottest reservations in town — it’s a teaser for the meaty menu at Gwen, where Stone is quietly fomenting a new way of thinking about the animals we eat.

Just as American diners have demanded fresher, organic and more sustainably raised fruits and vegetables, now there is growing demand for better-quality meat. Stone is positioning Gwen as a West Coast mecca of the better-meat movement, not only with what’s served on the menu, but with the retail shop and as a small importer and wholesale supplier of premium product not easily found in the U.S. Gwen is both a restaurant and a full-service butcher shop. Chef-owner Curtis Stone (above) says the retail arm lets him better control sourcing and preparation, and offers an opportunity to educate guests about their food. (Photo by Ray Kachatorian)

Stone recently launched a partnership with premium-meat supplier Thomas Foods International USA, for example, and Gwen has also been a supplier to other chefs of the Australian Blackmore wagyu beef served in the restaurant and sold in the butcher shop.

“Our goal was to create an environment where people can come and pick up fantastic product, but also maybe learn a little something about the product, like where the animal comes from, what it was fed, how it was bred, what breed of animal it is or how old it was at the point of slaughter,” said Stone.

These were questions Stone asked as he developed the menu for Gwen and conducted blind taste tests, looking for best-in-class proteins.

“We sat down and said, ‘What’s important to us?’ Is it husbandry, ethics, flavor profile? What did we want to feed our customers,” he said. “Of course there were things around animal welfare, and things around ‘natural’ that were very important to us. It’s a whole-animal butcher shop. So you ask yourself all these questions.”

Not surprisingly, Stone, who is originally from Melbourne, Australia, has tapped producers from his home country, which is rapidly becoming a go-to source for grass-fed and naturally raised lamb and beef that is not widely available in the U.S. Gwen serves wagyu beef and distributes it to other chefs. (Photo by Clay Larsen)

Stone claims there are significant differences in the way meat is raised in Australia, compared with what he calls the “big ol’ business” of American meat production.

When he first came to the U.S., for example, Stone was baffled when Americans said they didn’t really like eating lamb. “They’d describe it as gamey and not to their tastes,” he said.

In Australia, lamb is generally grass-fed. It’s also only designated as lamb if slaughtered before the second tooth has broken, which is usually around 9 months of age. After that, it’s classified as mutton, he said.

In America, bones are used to classify lamb, and Stone said animals can be processed when they are older. “There’s probably about seven or eight months difference in terms of the age of the animal. So the American lamb could eat a lot gamier because it’s lived a longer life potentially,” he said.

The American Lamb Board, however, disputes that age difference. Meat from sheep younger than 12 months of age can be classified as lamb, but animals are also typically processed around nine months of age in the U.S., a spokesperson said.

But Stone is not only promoting Australian meat. With the Thomas Foods partnership, for example, comes access to Royal Dutch Veal from the Netherlands, and Gwen has become known as the source for seasonal meats, like Scottish grouse, wood pigeon or partridge, as well as product from premium American meat producers, like Creekstone Farms in Kansas and Five Dot Ranch in Napa, Calif.

While the butcher shop produces about 20 percent of Gwen’s revenue, Stone sees the retail shop as both a tool for the restaurant and a service to the growing community of consumers looking for something better.

“The butcher shop gives us a significant advantage,” he said. “When you have the ability to age meats up to 80 days and hang charcuterie for up to a year and a half before you slice it, not many restaurants get to have that.

“But it’s also a real-life butcher shop with five full-time butchers, and it’s open seven days a week. We serve a community of people looking for something special for those special occasions that they will drive from out of town for.”

Gwen, meanwhile, offers three-course ($55), five-course ($85) and10-course ($185) menus. A recent menu included the entrée option of fire-roasted glazed pork cheeks, along with a grilled rack and smoked belly; boneless short ribs made into a confit and grilled; duck with ramps, English peas and pinenuts; and a 12-ounce New York strip wagyu serving two (for an additional $185) or a 42-ounce bone-in wagyu ribeye serving four to six (for an additional $360).

“We really should be eating less meat, but better-quality,” said Stone. “Those days of the giant steakhouses, where you get a steak hanging over the plate, we just don’t need to eat that way. You’re much better off with a small portion of better-quality meat.”