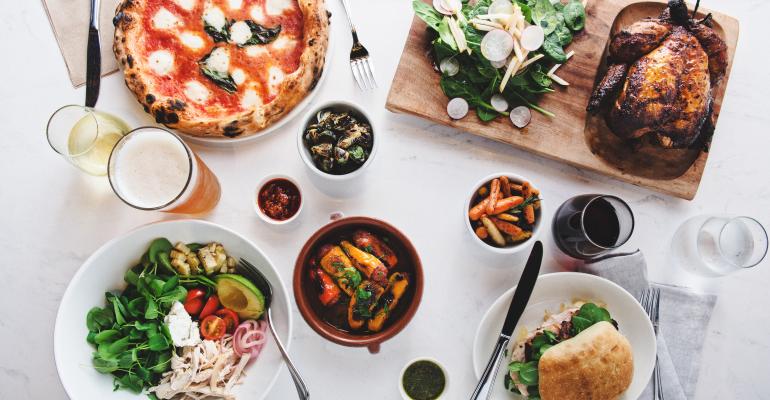 The Los Angeles-based brand, which has seven domestic units and nine abroad, added a wood-fired rotisserie that replaces one of three wood-fired ovens, updated the exterior of its downtown restaurant and added carving stations for the new items on the customer-service line.

Chef Anthony Carron, who co-founded 800 Degrees in 2012 with an emphasis on Neapolitan pizzas, said the rotisserie allows the concept to offer such items as a garlic and rosemary roasted porchetta sandwich, roast beef with roasted potatoes and caramelized brussels sprouts and roasted salmon salad.

Carron will also be rounding out the menu with appetizers, desserts and even cocktails that showcase wood=fired ingredients. The restaurant will continue to offer wood-fired pizzas.

“By evolving our menu to include wood-fired rotisserie proteins, we are demonstrating our dedication to serving artfully crafted dishes that are never ‘assembled,’ but instead the result of days of meticulous preparation,” said Carron in a statement.

“Our dedication to fresh, high quality ingredients is the key to our ‘food-first’ approach,” he said, “and provides the foundation for almost endless opportunities to infuse flavor in traditional and unexpected ways across a variety of menu items.” The ovens burn a variety hardwoods, including oak, mesquite and fruitwoods, that achieve the 800 degrees that yield the name.

The new name has been updated on exterior signage, and the interior changes include a full bar remodel, elevated seating in some areas, new lighting and a dessert station, a spokesperson said.

He said the research found the Woodfired Kitchen showed “significant guest preference,” and it would also attract a broader demographic.

The company said several of the older 800 Degrees pizza locations would be remodeled with some of the recent downtown Los Angeles unit’s elements and that it would be used for future expansion. Others will continue as the pizza-oriented concept, the company said.