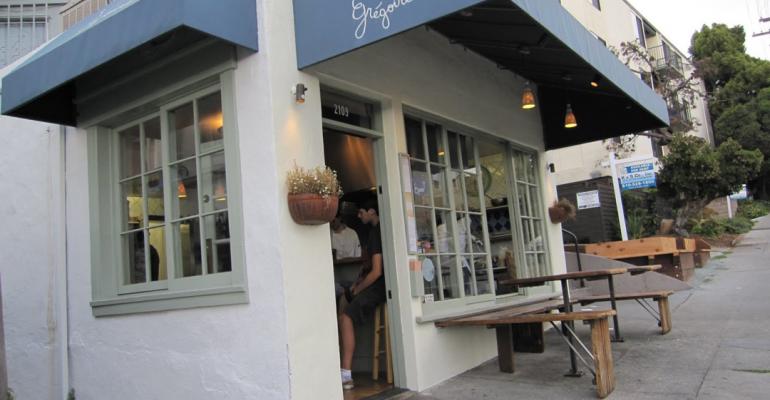 Chef Gregoire Jacquet announced that his eponymous restaurant is franchising, and he is using the hub and spoke model to kickstart frictionless expansion

Chef Gregoire Jacquet — a classically trained chef and creator of what he calls the first fine-fast-casual restaurant, Gregoire in Berkeley, Calif. — is launching franchising. Originally announced in January, Jacquet has a goal of opening 15 or so restaurants over the next decade. Unlike traditional quick-service models, Gregoire’s franchising expansion will likely be slow and purposeful because with a menu of recipes inspired by fine-dining, consistency of quality is crucial.

“We use local ingredients and meats from farms and make sandwiches out of them, and it’s all done takeout-style,” Jacquet said. “[…] We change our menu quarterly depending on the seasonal availability. […] Our recipes are pretty difficult and all of the preparation is done at a high=culinary level. We don’t buy anything pre-made, and some of these recipes are pretty technical.”

Jacquet began his career cooking in France before moving to the US to train with French chef Jacky Robert, who helped to bring fusion cuisine to America. After nearly a decade of working as an executive sous chef for the Ritz Carlton in multiple cities, Jacquet decided to open his own restaurant. Gregoire opened in Berkeley in 2002 as an upscale salad and sandwich restaurant with dishes like egg salad and anchovies on toast; a quiche made with zucchini, garlic and feta cheese; poutine and his famous potato puffs.

Although Gregoire has only had one location for 20 years, Jacquet believes now is the right time to franchise. But with such a delicate menu with complex recipes and fresh ingredients, how will he ensure quality as the concept expands? Jacquet is going to employ something skin to a hub and spoke model that ghost kitchens have used: He and his team of trained chefs will prep food periodically in a central commissary kitchen and then hand the semi-prepared food off to the franchised locations. That way, Jacquet does not necessarily need to partner with culinarily-inclined franchisees.

“Our model is going to be a little different than a typical franchise,” he said. “We’ll roast the turkey, we’ll slice and portion the turkey, and send it to our franchisee, so the only thing they have to do is the same thing all line cooks do: we’ll have a lineup of portions of ingredients in containers labeled with use-by dates, and then all they have to do is assemble [the sandwich or salad] and they’re good to go.”

Jacquet is already working with software that will allow staff to easily keep track of inventory: the software notes every time an order is received so that they will be able to keep track of exactly when a franchisee needs a refill on turkey, lamb patties or Persian cucumber salad.

While this sounds simple enough, Jacquet said that the culinary training will still have a learning curve because they will have to re-train staff every time the menu changes seasonally. As Gregoire expands, each franchised location should be no more than an hour or two away from the central hub to make sure that they can deliver the prepared ingredients without an issue.

So, if Jacquet is not specifically looking for culinarians to run his franchised restaurants, then what is he looking for in a business partner?

“They don’t have to have culinary skills, but they do have to have people skills,” he said. “When I first started Gregoire, I was well-rounded. I didn’t just cook-- I knew all the numbers and I was passionate about people.”

Jacquet is keeping an eye out for franchisees in markets on the West Coast and Southeast, specifically Seattle and Florida.