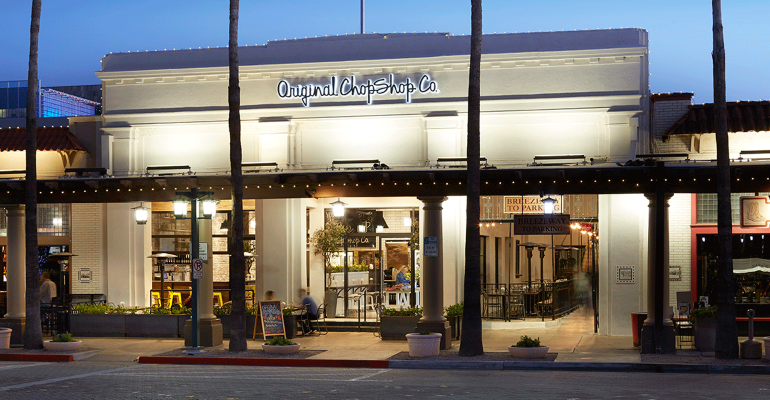 New restaurant opens in Phoenix, with an eye on Dallas market

Hargett Hunter Capital Partners has outlined plans to expand Original ChopShop, which is based in Phoenix and has four units.

Hargett Hunter bought into the Original ChopShop in July 2016, and Houston-based Ruggles Green in October.

Morgan, who serves as CEO of ChopShop, said the fast-casual brand is well positioned in today’s market.

“The brand has an ‘it factor,’” Morgan said. “Customers really have an emotional connection to it. The employees were happy to be there, and the interactions were fantastic. The food is also great: better-for-you fast casual.”

Morgan, who worked with Zoës Kitchen before joining Hargett Hunter, said the company believes ChopShop, which first opened in 2013, can work “anywhere in the U.S.” Original ChopShop has earlier restaurants in Chandler, Scottsdale and Tempe, Ariz.

The fourth Chop Shop unit, which opened in the Queen Creek, Ariz., area, covers 3,345 square feet, but future units will be smaller, he said. A rendering of the Original ChopShop location at Queen Creek, Ariz.

“That’s a lease we inherited. That’s a little larger than what our typical prototype will be,” Morgan said. “We will probably be between 2,500 and 2,800 square feet as we build the next stores in the Phoenix area.”

The newest ChopShop also offers a 732-square-foot patio, and interior tables have charging stations and free Wi-Fi for customers. The restaurant seats 80 customers inside and 49 guests on the patio.

ChopShop serves breakfast, lunch and dinner, and the beverage component — with protein shakes and juices — allows for snack occasions, he said, adding, “We’re really maximizing the square footage of the box.”

Prices for the popular ChopShop Bowls are $9 to $11, and, with juices or lemonades, the average check ranges from $13 to $15. About 30 percent of the ChopShop mix is protein bowls, and teriyaki chicken is the best seller, Morgan said. Customers order at a counter and staff delivers food to the tables. Off-premise orders make up about 50 percent sales, Morgan said.

“We do almost no catering, and that’s a great opportunity,” Morgan said. “We see nothing but upside in that.” The interior of Original ChopShop at Chandler, Ariz.

“First, it serves a daily-need use similar to Starbucks. We have people coming into the store three or four times a week for things like protein shakes after a workout,” he said. “From a customization standpoint, it looks like a Chipotle. You can take your bowl and sandwiches and salads and mix and match. Thirdly, everything is made fresh in the store: all the vegetables and fruit are hand diced in the back similar to a Zoës Kitchen. You combine all three of those together, and you have a pretty powerhouse brand.”

Morgan said that beyond the three additional ChopShop locations planned for the Phoenix area in 2017, Hargett Hunter is looking for real estate in the Dallas area for further development.

“We’ve built a share-services center in Dallas that has a team to support both of the brands,” he said. “We’ve been able to recruit talented folks to support both brands. Both are in similar life cycles.”

Ruggles Green was found in Houston, in 2008.

“They are similar in attracting educated, affluent guests,” he said. “ChopShop skews a little bit younger.”

Rescinded: The faces and voices the SBA left behind
Jul 15, 2021