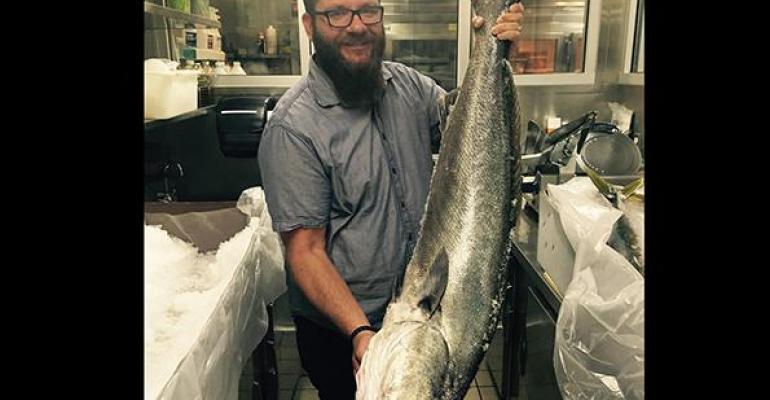 Chefs in California will soon have access to a restaurant-supported fishery program that will bring them weekly deliveries of sustainably caught seafood direct from fishermen who work the Santa Barbara coast.

Known as Dock to Dish, the program has been available on the East Coast since 2012 and has been piloted by chefs like Dan Barber of Blue Hill Restaurant and Blue Hill at Stone Barns. The East Coast operation works with fisherman out of Montauk, N.Y.  About 15 restaurants on the East Coast participate so far, and the program recently signed its first institutional member: the New York offices of Google.

Serving as the “guinea pig” and ambassador for the program on the West Coast is Michael Cimarusti, executive chef and co-owner of the seafood-focused restaurant Providence in Los Angeles, as well as the more casual Connie & Ted’s, and the soon to open seafood market Cape Seafood & Provisions.

The West Coast operation will include product from 16 small-scale commercial fishermen from Santa Barbara, who only feature fish rated sustainable or abundant under National Oceanic and Atmospheric Administration, or NOAA, fish watch standards.

The goal, says Sean Barrett, co-founder of Dock to Dish, is to more directly connect chefs with local fishermen to reverse a tide of foreign seafood flooding the market.

About 90 percent of seafood available in the U.S. is imported, and half comes from aquaculture sources, the majority of them in Asia, says Barrett. Very little is inspected by the Food and Drug Administration, and a large percentage is untraceable. There are also concerns about wild seafood that has been harvested illegally or fish that is fraudulently mislabeled.

Dock to Dish, on the other hand, is modeled after Community Supported Agriculture programs. “It’s a revival of the Catch of the Day in the simplest form,” Barrett says.

Chefs will pre-pay a flat fee, which in New York is about $3,225 per month. It will likely be something around that range in California as well.

In return, the restaurants receive a weekly shipment of seafood fresh from the dock, or a minimum of 300 pounds per month. They also receive expertly curated dock reports and full transparency on the fishermen, the type of gear used and more.

The catch will vary by season and availability, and chefs don’t know what exactly they’ll get until the night before the early morning delivery, just after the seafood is pulled from the water.

So, as Cimarusti puts it, “You gotta get creative.”

Last week, for example, Cimarusti received 60 pounds of kellet’s whelks, a type of sea snail, as well as 40 pounds of rock crab and 40 pounds of lingcod.

“We had the lingcod on the menu last night, and it was absolutely beautiful. It was just perfect,” he says. “The whelks—we’re still trying to figure that one out.”

Cimarusti says his team first braised the whelks overnight. “We tasted them this morning and they’re really delicious. Now we just have to figure out what to do with them.

“They are similar in flavor and texture to abalone, which many Californians have a soft spot for,” he says. “So here’s a species that lives off the coast of California that can be harvested sustainably and will help support American fishermen to keep them out on the water. It’s a win-win.”

Barrett says the program also provides an intangible that conventional distributors can’t: the story behind the fish.

Restaurant servers, for example, can tell consumers the name of the captain of the boat that caught their dinner, or details about the catch.

Cimarusti’s lingcod, for example, was caught in waters that have warmed as a result of the El Nino weather conditions on the West Coast, which has resulted in a spike in hammerhead sharks. The fishermen caught the lingcod on lines and it was a race to reel in the catch before the hammerheads got to them, Barrett says.

“It activates the imagination of the diner and ultimately becomes part of the overall experience,” he says.