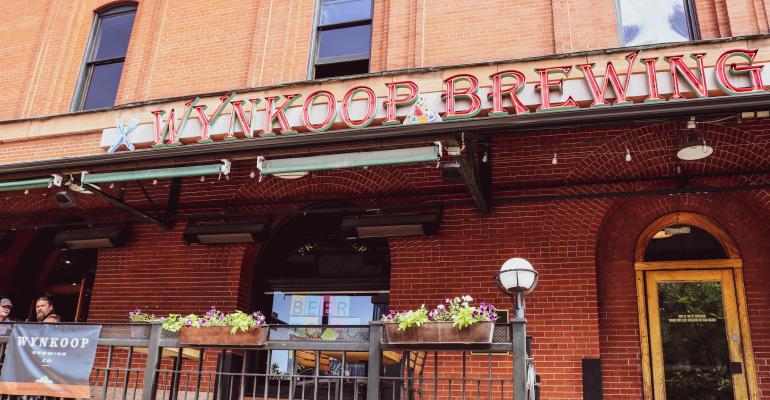 After 34 years, the concept founded by John Hickenlooper is adding an events venue and tasting room

Colorado maintains a solid reputation for craft beer, but long before extreme hops hit the scene, Wynkoop Brewing Company in downtown Denver churned out great suds and casual fare to go with them. Now, it's making the 34-year-old mainstay even better with a new culinary team, events space and tasting room.

Executive chef Chris Collins, who joined the brewpub at the end of 2021, has kept the menu approachable, but there’s also a little more adventurous food available, according to vice president of operations Amanda Young.

"I think you would be surprised that you could get something like coffee-rubbed brisket or some of the specials the chefs are putting out," Young said. "We do try to elevate our dishes and beer."

In fact, often the dishes are elevated with beer. For example, the Rail Yard Ale is used in the barbecue sauce for the ribs, the fish and chips are made with whatever ale is on tap, and Patty’s Chile Beer, named after Patricia Calhoun, the founder of Denver's alt-weekly paper Westword, has been mixed into a broth for mussels and turned into a slightly spicy version of biscuits & gravy. The daily menu also includes foods that don't have beer in them but that go great with a pint or two. It's what one expects at a brew pub – Wings, burgers, fries, nachos and salads — as well as surprises including bison burgers, panzanella salad, and a roasted mushroom bowl with herb goat cheese and citrus tahini sauce. The per-person check, including beer, is around $20-$30.

There’s also a waste-reduction element to the menu as some byproducts of beer production end up in the food.

"You'll find spent grain in just about everything from bread to crackers, and we use the beer in vinaigrettes and sauces," said Young. "We like to think out of the box, and using the spent grains gives them a second use that's unique to a brewery."

It's not just the chefs getting creative. Brewmaster Todd Bellmyer came onto the team at the end of 2021, and he has been playing around with recipes old and new. For example, Wynkoop worked up a special promotional beer for a local climbing chalk company for which the chalk dust was used in the brewing process.

The brewery has a history of quirky beers, such as the signature Rocky Mountain Oyster Stout, a beer brewed with bull testicles, which are euphemistically referred to as “Rocky Mountain oysters,” in Colorado. Originally that was meant as an April Fool’s joke, but 10 years later it has become a cult classic and shows up on the menu every April, along with a plate of thinly sliced and fried Rocky Mountain oysters.

"Over the years I have worked with the company there has always been collaborations between the chef and brewer, whether from food in the beer or beer in the food," said Young. “Once we did a doughnut beer with Habit Doughnut Dispensary [in Denver] and made a doughnut bread pudding to go with it."

After 30-plus years, the brewpub also has plans to expand the space in the basement into an events venue and tasting room. But adding onto the historic J. S. Brown Mercantile Building isn't easy.

"There are infinitely more hoops to jump through and approvals to garner when you pursue a historic renovation project, and it's challenging but gratifying," said Alex Bunn, vice president of brand strategy and growth for the Breckenridge-Wynkoop Restaurant Group. "In the case of Wynkoop, we're striving to balance our modern business interests with those of preservation. We love this building and the role it has played in LoDo," she said, referring to the Lower Downtown neighborhood where the brewpub is located.

This isn't the first time the basement of the Wynkoop has been used for things other than storage. The building has been around since 1899, after all. There's a rumor, said Bunn, that the basement connects to the city’s main train station, Union Station, which is now also a food hall, via underground tunnels. Whether or not that’s true, she added it's still a popular spot for ghost hunters to visit. The downstairs also has housed a comedy club and a makeshift climbing wall.

"It's amazing to see the things that folks come up with when you have more than 30,000 square feet to play with," she said.

Even without the basement space the brewery is large, sporting a main dining room and large, circular bar on the first floor, and a bunch of pool tables and seating on the second. While the flavors on the menu have evolved, that original layout speaks to the days when Wynkoop Brewing first opened in 1988.

The venue was launched under the guidance of Jerry Williams, Mark Schiffler, Russell Schehrer and John Hickenlooper. If that last name sounds familiar it's because not only was Hickenlooper the 43rd mayor of Denver, and governor of Colorado from 2011 to 2019, but he also briefly ran in the 2020 presidential election. Currently he holds the position of  junior U.S. senator from Colorado, and no longer is part of Wynkoop. Right before he started down the politician path, the senator sold his shares in Wynkoop Brewing to Wynkoop Holdings. The business is now under the umbrella of Breckenridge Wynkoop Holdings after the LoDo brewery merged with Breckenridge Brewery in 2010.