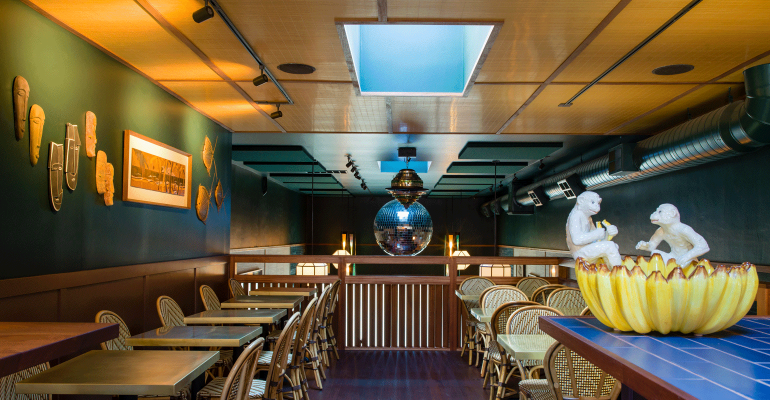 Cooking up a backstory

How a narrative can serve as a concept’s north star

The guy behind Bon Voyage!, a buzzy new restaurant in San Francisco, traveled throughout Southeast Asia and Africa in the 1950s. He ends up living — and partying — in Palm Springs in the 1970s. Artifacts and recipes from his travels are found throughout the restaurant, in the form of safari murals, tiki drinks and funky disco-era wallpaper.

But like any good story, there’s a twist: This guy doesn’t exist. He’s a figment of the savvy imaginations of the restaurant’s co-founders Josh Harris and Morgan Schick of BVHospitality and The Bon Vivants, also the operators of Trick Dog in the Mission District.

Creating a narrative — whether it’s completely out of whole cloth or with some elements of truth — is a way for a new restaurant to get its footing; a way to communicate to staff and customers what this new place is all about. A history provides a guide for the décor, menu items and overall vibe of the restaurant.

A bull and a bird walk into a steakhouse

A new backstory can also offer a fresh start.

In Chagrin Falls, Ohio, for example, the former restaurant Gamekeepers was known throughout the region as a special occasion spot.

When Gamekeepers closed, Hyde Park Restaurant Group jumped on the opportunity to open a new restaurant in the location, a more laid-back but chef-driven version of the white-tablecloth power-steakhouses the group is known for.

But first, they needed a story, something that would help erase the recent past in the style of burning sage in a new house.  More importantly, that story would frame the new project in the mind of stakeholders, staff and, eventually, a new clientele.

“We created a backstory that drove us in every single element of what this concept has become to this day,” said Joe Saccone, principal of Hyde Park Restaurant Group. “I think what happened here, the property has so much history to begin with and since we have Jekyll’s Kitchen [a stylish cocktail bar], also in Chagrin Falls, we knew some of it.”

But Saccone said the question was: “When a space becomes available after 40 years, what do you do?” 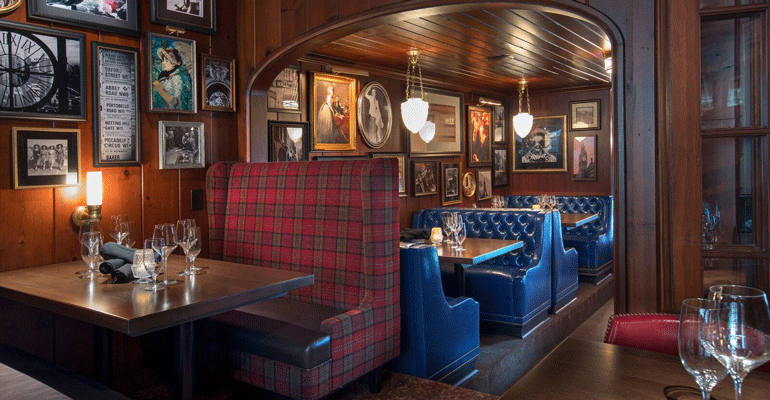 The building, which has been attached to the Inn of Chagrin Falls from the late 1920s to the start of World War II, is called Crane’s Canary Cottage. That canary is the “bird” in the restaurant’s name, Bull & Bird Steakhouse, and the bull, of course, refers to the steaks.

With about $1.5 million invested in the new steakhouse, the team had meeting after meeting in which Saccone let out his inner paperback writer.

Combing websites and local records for the owners of the building even prior to the Rockefeller days, Saccone found out that the Crane of Crane’s Canary Cottage and attached tavern was Clarence Arthur Crane, the inventor of the Lifesaver candy and father of famous poet Hart Crane. The elder Crane hosted titans of industry in his tavern, along with celebrities of the era.

From there, a backstory of historical fact and fiction began to grow, which Saccone found vital to the concept’s development.

“We created a couple: The Cranes,” he said. “These were well-to-do people doing what you did after World War II, touring all over Europe and all over America. Because they were culinary people, they ate at all these places. That took our direction into a menu standpoint: This is an American steakhouse, but it has European influences.” 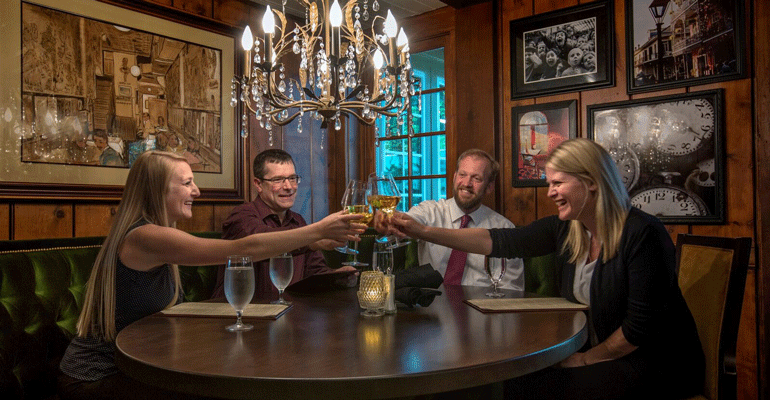 An example of the attention to detail is the Parisian butter the restaurant flies in for a kick of authenticity amidst the fiction.

“With the design, we did the same thing,” Saccone continued, pointing out the walls that are layered with black-and-white photos gleaned from thrift shops and scanned images pulled from the Internet and framed to look old.

“There’s a cowboy on a horse from when they drove up and down Route 66 … they cross the street at Abbey Road …. they saw the Rolling Stones perform in Germany … all of these images tell you about this couple’s journey,” he said.

This same Forrest Gump-esque reimagining of travel in the 20th century also drives Bon Voyage, with the world-traveling hipster guy, who is not named.

The adventure of travel

On the journey of opening Bon Voyage, Harris and Schick of BVHospitality were joined by general manager Kimberly Rosselle and bar manager Elliot Clark, as well as executive chef Wilder Marroquin.

Once the world traveler from the story settles down in Palm Springs, “he buys a house to fill with his worldly treasures and then throws killer disco parties and serves Chinese food,” Harris said in a statement. 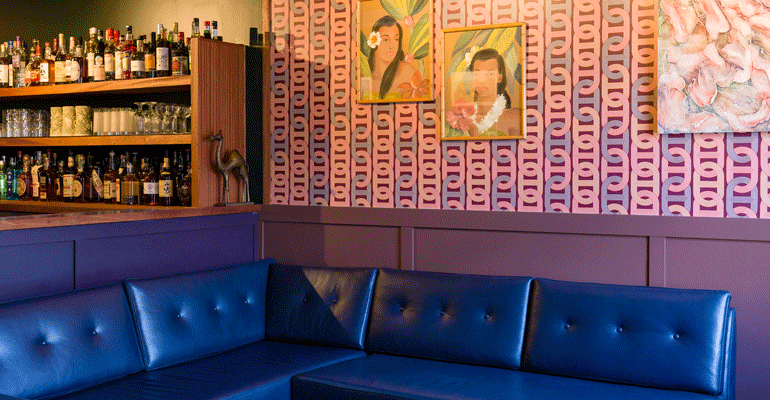 Building on that inspiration, the menu became a scrapbook of flavors. Cocktails, for example, include a Singapore Sling, the Bananarac! (rye, banana and bitters), the Bootsy (Santa Teresa rum, grapefruit cream soda) and the Edwyn (scotch, Drambuie, pineapple soda).

The design of Bon Voyage is an eclectic riot of colors, textures, objects and art with architecture by Wyle Price Design. There’s a cozy loft area with rattan chairs and a crazy punch bowl of ceramic bananas and monkeys. Tribal masks keep watch on walls. And there’s a disco ball.

When Patina Restaurant Group set out to open an Italian restaurant and a speakeasy in the shopping, dining and entertainment complex Disney Springs in Bay Lake, Fla., founder Nick Valenti researched Central Florida had ever seen an influx of Italian immigrants.

It turned out there actually was, in the 1940s and ‘50s. That shred of fact was what the team ran with to create Maria & Enzo’s and Enzo’s Hideaway.  Patina also operates Pizza Ponte, Morimoto Asia and The Edison in Disney Springs. 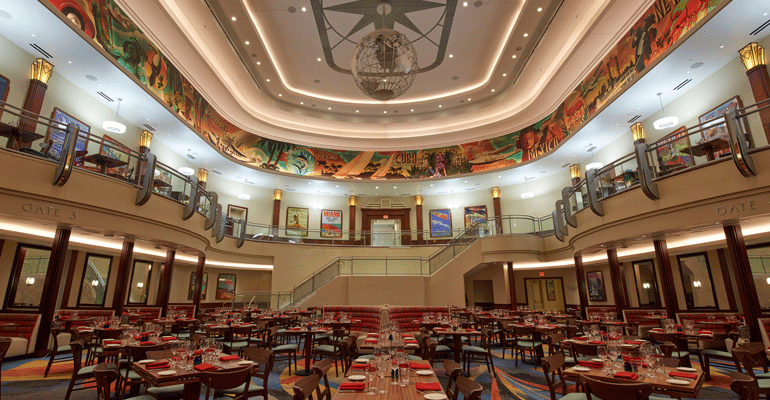 “In the context of creating restaurants, you like for the main elements of the storyline to be accurate and to be real,” Valenti said. “From that standpoint, clearly there were elements that are created, but if you can weave that in with elements that are from a real time and place … it’s more fascinating.”

While researching the cultural climate of Florida in the mid-20th century, Valenti uncovered some local legends about bootlegging operations and secret passageways. That became the inspiration for Enzo’s Hideaway. 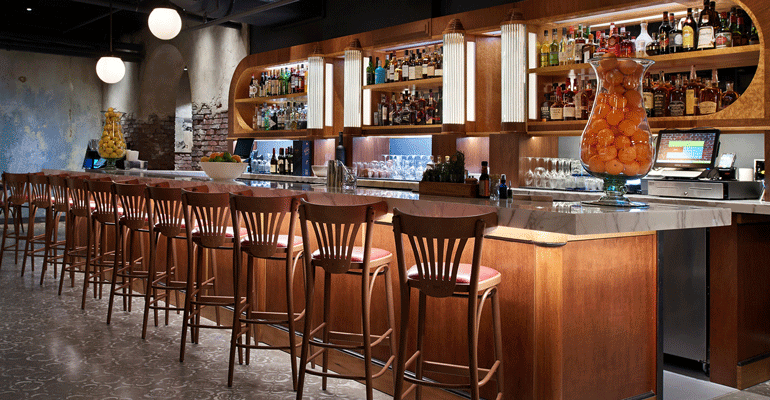 Then Disney Imagineers stepped in. The architects, set designers and interior decorators helped the Patina Group ‘Disney up’ the place, with weathered walls, exposed brick, and the overall look of the old airplane garage where Maria and Enzo, immigrant lovebirds, reconnected after meeting in Sicily years before.

The Southern Italian connection leads to hearty pasta and meat dishes on the menu.

The whole storyline plays a background character and shapes the atmosphere. 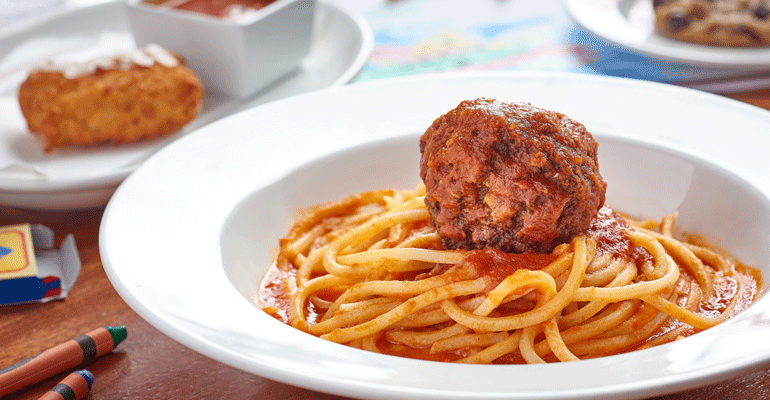 “People don’t walk in necessarily saying, ‘So what is the storyline?’ But we found that having a storyline informs us — those putting together a restaurant concept — and it then informs our employees and associates. There’s a reason for doing things; for the tables and the décor and then that helps them communicate to our guests.”

“It’s creative,” Valenti added. “Some is imaginary, and some is true, and then the staff brings it to life.”