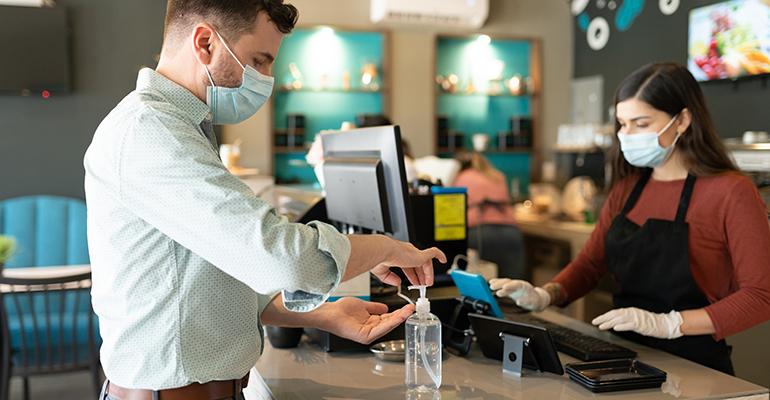 Antonio_Diaz / iStock / Getty Images Plus
“Consumers are looking to dine out. It’s not all doom and gloom. They want to go. They need to leave the house, but they want to feel safe,” said Adam Werner of AlixPartner.
Operations

Consumers are warming to dining out, but they want to feel safe, says AlixPartners data

And though delivery is increasing, pickup is preferred — in part because people just want to leave the house

Despite the ongoing pandemic, consumers are warming more to the notion of dining out — something they yearn to do more — but more than two-thirds say they still prefer cooking and eating at home out of concern about exposure to coronavirus, according to new research by global consulting firm AlixPartners.

Adam Werner, AlixPartners managing partner, said during a Restaurants Rise webinar on Thursday that the firm has been surveying consumers across the U.S. through the ongoing pandemic and results indicate the relationship between diners and restaurants is evolving.

Looking at data from July compared with surveys in April, Werner said, “Consumers are gaining more confidence. But as they gain more confidence, their expectations are actually rising.”

While restaurant spending is still fairly low, it’s still No. 1 when you ask consumers how they’d like to spend their dining dollars, he said.

“Consumers are looking to dine out. It’s not all doom and gloom. They want to go. They need to leave the house, but they want to feel safe,” he said.

Between April and July, the percentage of consumers that said they prefer cooking at home remained the same: 61%. But their reasons for staying home changed somewhat.

In July, for example, 45% of consumers said takeout/delivery was too expensive, up from 39% who said the same in April.

More than half of consumers surveyed (51%) had returned to dining out, though 6% said restaurants in their area were not yet open. Of the 43% that had returned to restaurants, 16% had only dined outdoors, and only 29% said they would dine out again within the next two weeks.

Consumer sentiment about delivery and takeout is also evolving, Werner said, with about 57% of consumers now ordering delivery or takeout at least once a week.

Though use of delivery is increasing, consumers still prefer to pick up their own food — in part because they want to avoid the added expense of delivery, but also because of concerns about health and safety. And 47% of consumers said they just wanted to get out of the house.

Restaurant operators should also consider that not all delivery/takeout customers are the same, and they should tailor their offerings for high-frequency users who order more than once a week — who tend to be male and younger, but cross all income levels.

What has to change for consumers to feel more comfortable about dining out?

Consumers want to see safety cues. Werner said consumers look for opportunities to dine outdoors. They like to see mask mandates and disposable menus, for example.

Consumers are also looking for discounts as incentives to dine out, but that is not as important to them as health-and-safety, he said.

Some highlights of Werner’s recommendations:

“Now is the time to think about longer-term sustainable cost reduction programs to weather the storm,” he added. “It’s amazing how fast entrepreneurs in this space can figure out a solution. If you haven’t by now, what are you waiting for?”

This is part of special coverage of the Restaurants Rise digital summit taking place Aug. 11-13 and Aug. 18-20, powered by Nation’s Restaurant News and Restaurant Hospitality. Register for live sessions or on-demand replays at RestaurantsRise.com.