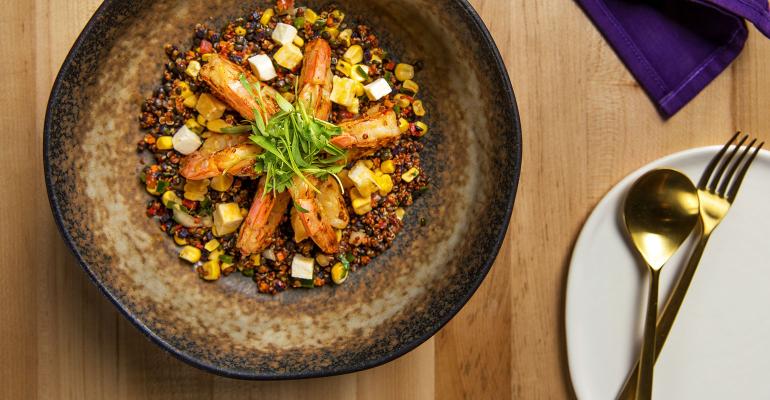 Anthony Mair
Lorena Garcia embraces a fusion of Latin American cuisines at her new restaurant Chica in Las Vegas. This cazuela of shrimp and quinoa is on the menu.
Operations

A chef that embraces fusion

To many chefs, “fusion,” is a bad word, conjuring up the clumsy culinary excess of the turn of the century — something to be avoided these days as restaurateurs and their customers seek authenticity.

But Lorena Garcia embraces it at her new restaurant, Chica, at the Venetian hotel in Las Vegas, which she opened in May in partnership with Miami-based restaurant operator 50 Eggs.

“It’s a fusion of Latin American culture,” said Garcia, who, as a native of Caracas, Venezuela, who has studied cooking in the United States, France, Italy and elsewhere, would be hypocritical to avoid the term. She also operates a culinary event space in Miami and appears frequently on cooking and talk shows in Spanish and English.

Chica is a grander operation, with 180 seats in a 14,000 square-foot space. “We have a kitchen that is Las Vegas-style, I would say,” she quips of the gargantuan facilities.

The restaurant is designed as a casona, or a large South American house surrounding a courtyard.

The cuisine is cherry picked from Peru, Brazil, Argentina and Venezuela — all countries where Garcia has spent considerable time cooking — as well as Mexico: This is the United States, after all, where customers expect Mexican food at a restaurant named Chica — which means “girl” in Spanish. Besides, executive chef Mike Minor’s background is in Mexican food. “But I was able to introduce him to new flavors, so he got very excited,” Garcia said.

That includes the flat corn cakes, or arepas, and yucca cheese bread called pandebono from Garcia’s native Venezuela, as well as Peruvian ceviches and Argentine steaks with chimichurri.

Often the ethnic finesse comes in the sauces, Garcia said. “I’m all about the picos and the salsas, so there are tons of little spicy sauces around the entire menu.” And those are often derived from South American chiles, such as the aji amarillo used in one of the sauces that garnishes an appetizer of octopus and crispy quinoa. The other sauce is a spicy citrusy Venezuelan salsa called guasacaca. This hearty lamb dish is crusted in crushed pepitas, or pumpkin seeds. (Photo by Anthony Mair)

There are tacos, of course, and multicultural dishes such as the Oaxacan Strip Steak, which is a 12-ounce New York strip served with a black mole, but also with a charred wild mushroom quesadilla stuffed with Point Reyes blue cheese to evoke a beloved north-of-the-border combination, along with a jalapeño “pesto.”

The restaurant has other plays on American favorites, too, such as the Hoppin’ José rice, which instead of the classic preparation of black-eyed peas and rice from the Carolinas is skillet-fried jasmine rice with black-eyed peas, topped with cilantro and avocado.

Garcia’s Mac Con Queso replaces macaroni with large kernels of Peruvian corn, hearts of palm from Costa Rica and spinach in a Parmesan cream that is gratinée in the oven, per Garcia’s European training.

There are French fries, too, of course — shredded potatoes, fried until crisp and served with steak — and Papitas Chicas, which are thicker cut and served with huancaina sauce, a Peruvian specialty of fresh cheese and chiles, along with lardons and cilantro.

Other dishes are more traditional, but with fine-dining presentation, such as the Corn Lollipops, which are sections of corn on the cob grilled and dressed Mexican street-food-style with butter, chiles, lime and cotija cheese, but attached to braided corn husks.

The restaurant also has a robust cocktail program highlighting Latin American spirits, including tequila, rum, pisco and cachaça, for variations on the Margarita, Daiquiri, Pisco Sour and Caipirinha.

Desserts include a tres leches cake with a sweet pineapple pico de gallo made from that fruit and whatever more exotic tropical fruits they can get their hands on.

Sourcing great tropical fruit can be a problem, Garcia said.

“That’s one of our challenges,” she said. “For example I wanted to have cherimoya, this incredible fruit produced in Peru [and elsewhere in Latin America]. But unfortunately when I found it, it wasn’t ripe enough, so if I don’t have it right, I’d rather not use it.”

Besides, she said, great tropical fruit “is extremely expensive and throws your food cost through the roof, so that’s when you make decisions.” Befitting a Las Vegas establishment, the restaurant has a grand scale throughout, with 180 seats in the dining room. (Photo by Linda Evans)

Appropriately enough for a restaurant named Chica, it opened on Mothers Day. Beginning operations on one of the busiest days of the year might seem foolhardy, but Garcia said it came off without a serious hitch.

“We did really, really well. We had a full house, and it’s been like that ever since. Las Vegas has been a big supporter,” said Garcia, who flies from Miami to Las Vegas around once each month.

Garcia hopes to bring in more exotic dishes as the restaurant matures — expanding the coffee program with Mexican Café Aromatico, infused with cinnamon, and Café Colao, which is made with hot water poured through finely ground espresso beans in a cloth filter.

“I have so many ideas,” she said. “There is a type of meat that I make that you salt it really well, and then you wet a special type of cloth and wrap it up and throw it on the fire, and you let that burn. And when you take it out and remove that cloth, the meat inside is just off the hook. It’s incredible.

“But we wanted to open with things that are accessible, that are approachable, that people understand,” especially the people who visit Las Vegas. Many of these customers are Middle Americans accustomed to having an appetizer, entrée and dessert.

“When you open a restaurant, you want to condense it into the minimum expression, and then as you grow, you grow the menu with it.”