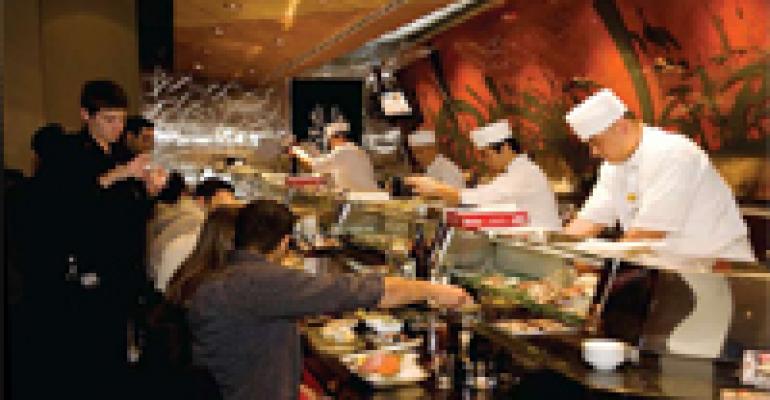 It's one thing for a young restaurant chain to say it wants to be the next P.F. Chang's, quite another to pull it off. But Kabuki, a small chain just starting to stretch beyond its L.A. power base, has a good shot at doing just that. That's why we consider it a Concept of Tomorrow.

Kabuki, with a combination of relaxed and dramatic interiors, a veto-proof menu and a strong price-value equation, has managed to take the intimidation factor out of Japanese food — specifically, sushi. Founder/president/c.e.o. David Lee has hit on a formula to get people through the door to sample largely unfamiliar tastes, and to return on a regular basis, sometimes weekly.

The menu samples from various Japanese cooking styles and presents something for everyone. Sushi and sashimi, which account for about half of all orders, come in dozens of varieties. But the squeamish have plenty of alternatives, including some 30 hot and cold appetizers; more than a dozen salads; hibachi, teriyaki and tempura dinners; soups and noodle dishes; sides; and Asian- and western-inspired desserts.

Kabuki has evolved since the first location opened in 1991. It started out looking like a fairly traditional Japanese establishment, with red lanterns, lots of wood and kimono-clad servers. The menu focused on safe, traditional choices. The response was lukewarm.

Lee livened it up by replacing traditional Japanese tunes with current popular favorites, softening the interiors to create a more casual vibe, and hiring young, energetic sushi chefs and putting them in more westernized garb. He also expanded the menu to include choices beyond standard Japanese fare, and he reengineered the menu to include more affordable options. Half-price sushi promotions encouraged trial and return. The most expensive item on the menu, the $19 “boat” meals (which are served in a boat), provide a variety of tastes, from sushi to tempura to dumplings.

The changes stuck, and business boomed. So much so that a restaurant broker talked Lee into branching out, nudging him toward upscale shopping and lifestyle centers in development.

Most of the dozen Kabukis that have opened in Southern California, Arizona and Nevada range around 5,000 square feet and seat 115-290 guests. They are marked by elegant murals, polished wood and granite sushi bars, soaring ceilings, dramatically backlit cocktail bars and spacious patios. Each location looks a little different from the rest, but a common design element is two murals, one behind a sushi bar, and another in the dining room, depicting a 17th century war in Japan. “We want to create a fun, casual atmosphere,” says Young Kim, director of marketing. “We don't implement a lot of Japanese or Asian motifs, so you won't see a Buddha or red lanterns,” he adds.

Unit sales run about $4 million a year. Two-thirds of each location's sales are during dinner, the rest at lunch. Checks average $18 at lunch, $22 at dinner, not including alcohol.

Kabuki's focus on value is right on the money for the times, says Darren Tristano, executive v.p. with Technomic. “The best way to grow your business today seems to be in promoting value. They seem to be well-positioned for growth.”

If there is one weakness in Kabuki's model, Kim admits, it's alcoholic beverage sales. Right now they range from 8-18 percent of the total. But the recent hiring of master sake sommelier Yuji Matsumoto should turn that around. He's been brought on board to educate the servers as well as the guests about how to sell, savor and pair the rice wine with various menu choices.

Running a chain of Japanese restaurants might seem like a stretch for the Korean-born Lee, a mechanical engineer by training. Not so. his father ran a respected Japanese restaurant for 20 years. And, after teaching and working for a time at Libby Glass, the restaurant bug bit Lee as well. He returned to school, earning an MBA from the Collins School of Hospitality Management at Cal Poly Pomona.

Lee chose to keep Kabuki simmering until the concept fully gelled; now, with 12 open and another on the way, he is ready to forge ahead, although he's still being cautious in light of the current economy — and developers' reluctance to mount any new lifestyle center projects.

Tristano says studies have shown that millennials are open to experimentation with more exotic cuisines, such as Japanese. He thinks Kabuki can capitalize on that interest by building new units in locations this generation will find attractive.

By the end of this year, 13 will be open, all financed internally. In 2010, presumably after the economy rights itself, the company plans to fire up the development engine again, probably expanding to Texas and Hawaii. Once Kabuki hits about 25 units, Lee says he will explore other options, such as working with investors and other partners, to push it to the next level. As of now, there are no plans to franchise.

“Once you leave a restaurant like ours to a franchisee, what happens is he or she could tweak it and try to reduce the food costs and quality,” Kim explains. “One bad apple can ruin the whole company. A chain like this is very different, not like fast food, which is turnkey.”