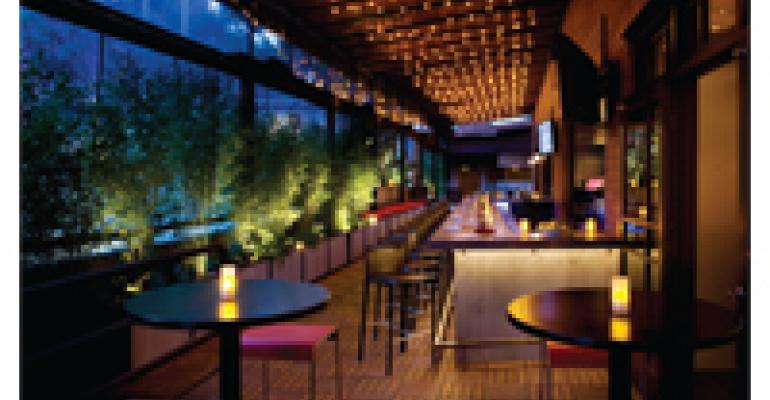 Has it even been a year since the restaurant industry hit on the phrase “polished casual” to describe operations whose food and décor blow mainline casual dining away? Probably not, but Josiah Citrin has already rewritten this emerging segment's definition at his new Caché in Santa Monica.

There are some casual touches at Citrin's new place, which opened in late June. But they mostly relate to the way in which the restaurant's indoor-outdoor dining setup gives off an informal California vibe. But the rest — a market-driven menu from perhaps the best chef in Los Angeles, plus a sleek design and a location just blocks from the beach — produces a kind of laid-back-yet luxurious ambience seldom seen in the casual dining arena.

Even better, the place is fun. “Caché is a relaxed place to spend an evening out — for dinner, for a bottle of wine and some small plates in the lounge, or for a drink at the outside bar,” writes Los Angeles Times restaurant critic S. Irene Virbila. “It already feels like an ongoing party you can join in any time. Just what the doctor ordered.”

All of which is what you'd expect with Citrin involved. Cool restaurants with great food are what he knows. He's so accomplished it's hard to believe he spent his early days as a surf bum with pal Ralph Lunetta, bussing tables at night so days could be kept free to ride the waves. Avoiding work was the lifestyle priority for this Santa Monica High grad.

But Citrin knew where to go when he got serious about cooking. First to Paris (Vivarois, La Poste), then back to L.A. to work for Wolfgang Puck at Chinois on Main and Granita, plus a couple of years spent with Joachim Splichal at Patina and Pinot Bistro. He and Lunetta opened the heralded JiRaffe in 1996, with Citrin departing in 1999. He then opened his own place, Mélisse, which now sits atop the Los Angeles-area food rankings with two Michelin stars. Still pals, Citrin and Lunetta are partners in Lemon Moon, a nifty spot in West L.A.

Citrin's challenge at Caché was to come up with a menu that's approachable and relatively affordable, but still displays the touches expected from a Michelin-starred chef.

The result was a market-based lineup of contemporary American dishes produced with French techniques. For those who want a traditional sit-down dining experience, Caché features an eight-item first course lineup (Ahi Tuna Tartare, $15); four salads (Beet and Burrata, $14); and nine entrees (Crispy Loup de Mer, $29). Small-plate noshers can choose one of eight wood-fired flatbread offerings (Spicy Sopressata with Mozzarella, Crimini Mushrooms and Sage, $14); or opt for either the charcuterie plate ($22) or an artisanal cheese sampler ($18).

A unique “Mason Jars” section of the menu is meant to emphasize the restaurant's farm-to-market sensitivities. It offers four varieties: Duck Confit ($9), Eggplant Caviar ($7), Smokes Salmon & Potato Salad ($11) and Foie Gras Parfait ($12). And on Wednesdays and Thursdays, guests can get a burger served with double-fried French fries for $18-$24, depending on its final composition.

Diners can wash it all down with something from the wine menu, which offers an extensive array of by-the-glass offerings. They're a bit pricey — only two items cost less than $10 — but nobody's complaining because of the surroundings. The redesigned space — it formerly housed a restaurant called Hidden, and, before that, Arnold Schwarzenegger's Schatzi — makes the most of its garden patio setting. Patrons can eat on the outdoor terrace, snag a table in the art-filled dining room, or take a seat at the bar that separates the two. Given the quality of the design, the term “polished” really doesn't do it justice.

But the food is plenty polished, especially with someone of Citrin's talents in charge. He's still manning the stoves at Mélisse, too, tapping 26-year-old Nyesha Arrington as Caché's chef de cuisine. She worked under Citrin at Lemon Moon and Mélisse, and polished her skills during stints at Joel Robuchon's L'Atelier and the Mansion in Las Vegas.

Arrington has quite a resume built up already, and Caché looks like a gig that's going to make it look even better. It's the kind of place people like to go to and it serves the kind of food they like to eat today, upgraded by Citrin's Michelin-star sensibilities. If you're wondering if polished casual really qualifies as a market segment, head out to L.A. to see what a state-of-the-art version of it looks like in action.