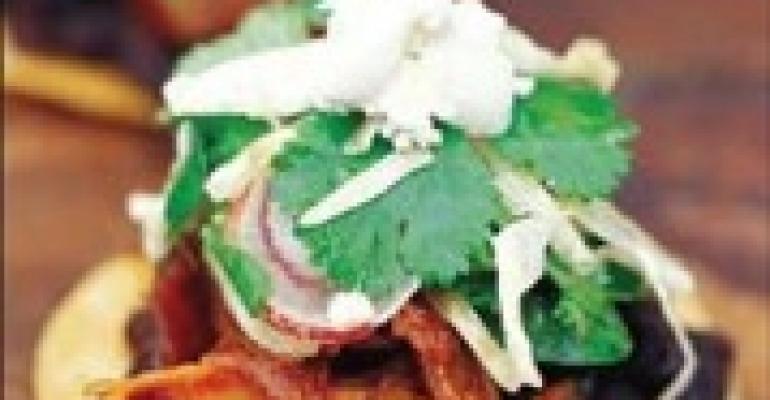 She first drew national attention for her work at San Francisco's Fog City Diner in the 1980s. But even back then Cindy Pawlcyn was helping to redefine American food by incorporating small plates onto her menu, with many of them featuring ingredients and flavor notes drawn from other cultures. It's a practice she continued at her next ventures, Mustards Grill and Cindy's Backstreet Kitchen, both in Napa Valley.

So if you're looking for advice on how the small plate phenomenon can be incorporated into your restaurant's menu without having to convert to full-blown tapas mode, her Big Small Plates(Ten Speed Press; $35) is for you. Its 370 pages draw on Pawlcyn's years of inventing dishes that produce interesting flavors, sound enticing enough so that restaurant customers will order them and arrive at the table as snappy presentations.

Other than telling you how to price these dishes, Pawlcyn does everything imaginable to make small plates accessible for the professional reader and, ultimately, the customers of the professional reader. Some ideas come from her Fog City Diner years, others from Mustards and Cindy's Backstreet Kitchen. There are a few from Pawlcyn's home collection, too, but nearly all 150 recipes would be worthy additions to most menus.

So what's a "big" small plate? Pawlcyn is sensitive to the reality that only a few customers seek out meals that consist exclusively of tiny portions of exotic fare. Many others are willing to take a chance on adventurous-sounding items, but are never sure how large a portion of something described as a "small plate" on the menu will turn out to be. That why she's designed her food to fit within certain parameters: a table can order three or four items of shareable dishes, pass them around, and everyone will wind up with a what she dubs a "small plate meal."

Thus her recipes are structured to produce enough food so that everyone gets a few bites, but no more. Want to bump any of these items up to entree size? Her recipes are written so that you can simply double them and you're there.

Presentation matters a lot with small plates offerings. Pawlcyn's advice: "Look for interesting serving platters, bowls, dishes and spoons," she writes. "I almost called this book Life Off a Long Oval Platter because small bites of food look so good on them!" Copious photography (150 images, not all showing finished dishes, however) provides readers with many attractive presentations that rely more on imagination and creativity than on big-budget purchasing skills.

As for the food itself, it's from all over the map—in a good way. "Back in the mid-1980s, we were doing foods from the Pacific Rim and from Italy. Gradually, we broadened our horizons to include all of the Mediterranean countries, with a heavy emphasis on foods from Spain," Pawlcyn notes. "At the same time, food from Mexico and Central and South America became more important. We also went less for fusion, and concentrated more on authentic techniques and culturally accurate dishes."

Pawlcyn knows how to write a good cookbook—her last one, Mustards, won a James Beard Award in 2002—and, much like her restaurants, has a sense of fun about the task at hand. Even if you don't want to put small plates on your menu, if you offer appetizers, you'll find plenty of valuable ideas in this book.