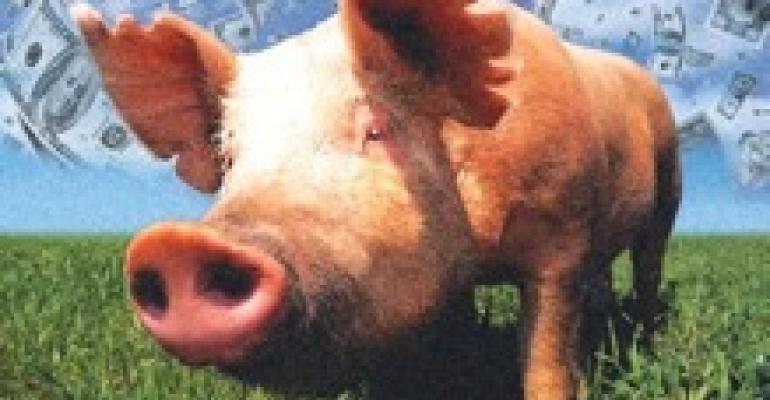 Higher On The Hog

It seemed innocent at the time. "Ruhlman!" said Michael Symon, chef-owner of Lola in Cleveland, "We gotta do a book about the pig!" A few days later, cooking at a benefit at The Culinary Vegetable Institute, I mentioned this to Brad Thompson, then chef at Mary Elaine's in Phoenix. He shook his head and said, "Every chef in America wants to write a book about the pig."

For the event, Thompson had procured a splendid pork belly for me, which I'd poached for 10 hours in some fluffy white lard I stole from Symon. At the benefit, we cooked it pressed down on a flattop to render fat and crisp the skin, sliced it and served it with what amounted to a warm fingerling potato salad and some of Farmer Lee Jones's spicy greens. The meat was rich and tender, the fat melted in the mouth—a beautiful dish, not because of anything we did, but rather because crisp-skinned pork belly is a gift from God.

Chefs tend to be ahead of the curve in knowing what's the best food out there—that's their job. And we tend to follow, because we're not stupid. As chefs embraced the pig in all its unctuous glory, American consumers began to reevaluate their own preconceptions, fundamental ones such as fat is bad and lean is good. While the agrihogs got leaner and drier, small farmers were able to promote fattier breeds, such as Berkshire and Duroc, first to chefs and now to consumers.

Paralleling these new desires for quality meats and less conventional cuts has been a growing movement toward the humane treatment of animals. This has suited the chef just fine, because the better treated an animal is while it's alive, the tastier its meat will be. Both in traditional media and on the internet, issues of humane treatment of the creatures we kill for food—whether it was Whole Foods giving its lobsters spa treatment, Frank Bruni's agonizing over the shrimp cooking at his table or the foie gras ban in Chicago—have moved to the fore.

In books, author Michael Pollan has made these issues compelling to read about, philosopher Peter Singer continued his convincing promotion of the ethics of veganism, and Marion Nestle has looked behind the shelves of the grocery store.

The news that Wolfgang Puck would buy only humanely raised food is a small landmark because he is not chef of one or two fine-dining restaurants, but 14, and scores of fast casuals. That kind of purchasing power makes a difference (sadly, perhaps for marketing reasons, he groups foie gras production into the same category as caged chickens and crated hogs). At the same time, Burger King—Burger King!—said it would begin to buy cage- and crate-free pork and eggs.

Temple Grandin, who pioneered systems of humane slaughter in the country's abattoirs, recently told The New York Times that on the issue of humane treatment of animals, "I feel we're at a tipping point now."

Yes, this is it, we are nearing a tipping point, at least in terms of the consumer understanding what matters about food. This is good not only for consumers but for the animals. More and more of them are living lives more in accordance with their nature, and are therefore less stressed and presumably more happy.

Pollan notes in his book, countering Singer's vegan-centric arguments, that there is a Darwinian advantage to delicious flesh—it ensures the survival of the species.

The example bears out today in bison. Once on the verge of extinction, bison now thrive because humans value their meat and ranchers can make a living at raising them (and bison are almost always pasture-raised and grass-fed, rather than fed on grain in animal feed lots).

But changes in our food attitudes are happening more rapidly than ever and the consumer has a more powerful voice than ever in driving what the food industry offers. At the least I can buy, with only a little effort, some excellent fatty pork from a farm-raised hog and cure it with salt and seasonings and poach it in fat and then cook it slowly to make its skin dense and crisp, and have an audience eager to eat confited pork belly.

One day in the not-too-distant future, maybe we'll even be able to buy it at Burger King.