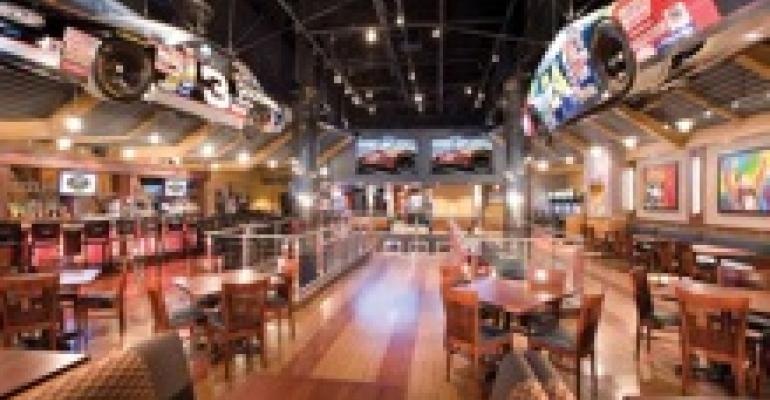 An Overhaul For NASCAR

With its 75 million fans, NASCAR is the most popular spectator sport in the U.S., and its free-spending devotees drop more than $2 billion per year on NASCAR-licensed merchandise. So you'd think NASCAR Cafes would make money hand over fist, especially since they occupy high-traffic locations deep in the heart of NASCAR territory.

Guess again. This 11-year-old theme restaurant concept is actually in the midst of a serious makeover, proving once again that good food and service, plus fresh decor, trump everything else in the restaurant business.

The first new NASCAR restaurant—now rebranded as NASCAR Sports Grille—opened on Feb. 14, following a two-month-long refurbishing. There's new ownership, too: the Cordish Company, a Baltimore-based real estate development and entertainment operating company. This firm invested $6 million in hopes the 25,000-sq.-ft. facility will find new life at its high-profile location at Universal CityWalk in Orlando. This site has two things going for it—year-round tourist traffic and close proximity to Daytona Beach, the premier stop on the NASCAR circuit, Cordish plans to do the same with the Myrtle Beach, SC, unit next.

"When you look at the cafe, it was born about the same time as the restaurant industry was exploding," says Blake Davidson, managing director of NASCAR's licensed products. "But the concept hasn't evolved much from what it started out as, so we saw this as a good opportunity to inject some life into it and take it in a new direction. The entire marketplace has evolved."

The upgrade takes the existing theme (good old boy stock car racing) and most of its menu (think of it as Southern country cooking with a tailgate twist) and gives it a contemporary spin, even though the concept is only 11 years old. It shows you how fast a theme restaurant can fade, even one with a seemingly gold-plated connection like NASCAR.

"We've brought in a worldclass designer and are creating a very hip concept that will appeal to the NASCAR fan base, but also expand well beyond that to people who are just interested in sports in general," company vice president Reed Cordish told Sports Business Journal. "We're blowing past the classic model of the sportsoriented restaurant in terms of design, cuisine and content."

The Cordish Company takes over from an outfit called H&C Racing, the original operator of NASCAR Cafes. H&C ran Orlando and Myrtle Beach plus units in Nashville (closed five years ago), Greensboro, NC and Sevierville, TN (near tourist spot Pigeon Forge, TN and the Smoky Mountains). The Sevierville unit closed last May. H&C still operates the Greensboro location, but it's no longer part of the NASCAR licensing arrangement. There's also a NASCAR Cafe in the Sahara Hotel & Casino in Las Vegas. Separately owned and licensed, that one is still going strong.

What's unusual about this arrangement is that it finds the Cordish Company on the other side of the table from where it usually sits. The firm describes itself as a multi-billion conglomerate that is the largest and most successful developer of entertainment districts and concepts in the U.S. It's usually the one leasing space to people who operate restaurants. In this deal, it's the one running the operation.

In fact, Cordish has quietly put up $50 million to open 30 restaurants and clubs in cities like Orlando, Baltimore, Houston, Kansas City and Louisville over the past few years. It has plans to take its in-house concepts like Vin, Mex (both now open near Baltimore) and Maker's Mark Bourbon House & Lounge (Louisville) and open them in other markets. It plans to add NASCAR Sports Grille units at the pace of one a year for the foreseeable future, including one in Manhattan. Former Cheesecake Factory president Peter D'Amelio has been brought on board to ride herd over the company's restaurant ventures.

How come a highly successful real estate developer (and a busy one, with $1 billion in other new projects underway) wants to bother with the restaurant business? After years of leasing restaurants to others, and seeing how that can turn out, Cordish thinks it can make a higher return leasing and operating restaurants than by leasing raw space alone. Figure the company makes six to 10 percent from its rental activities, and can add another five percent by operating the restaurant. It projects annual revenues of $12 million from the Orlando location.

The company believes in the restaurant operations business strongly enough that it's doing it with its own money. "We're risking the family's capital to create something other people deem too difficult to execute," says Cordish vice president Jonathan Cordish. The family thinks its edge in development gives it a big leg up on any competitor.

The Cordish Company has an enviable track record in business. When people this smart think full-service restaurants are a good place to put their money, you and your fellow operators are in good company.